My Dad, My Hero: Ryan’s Story 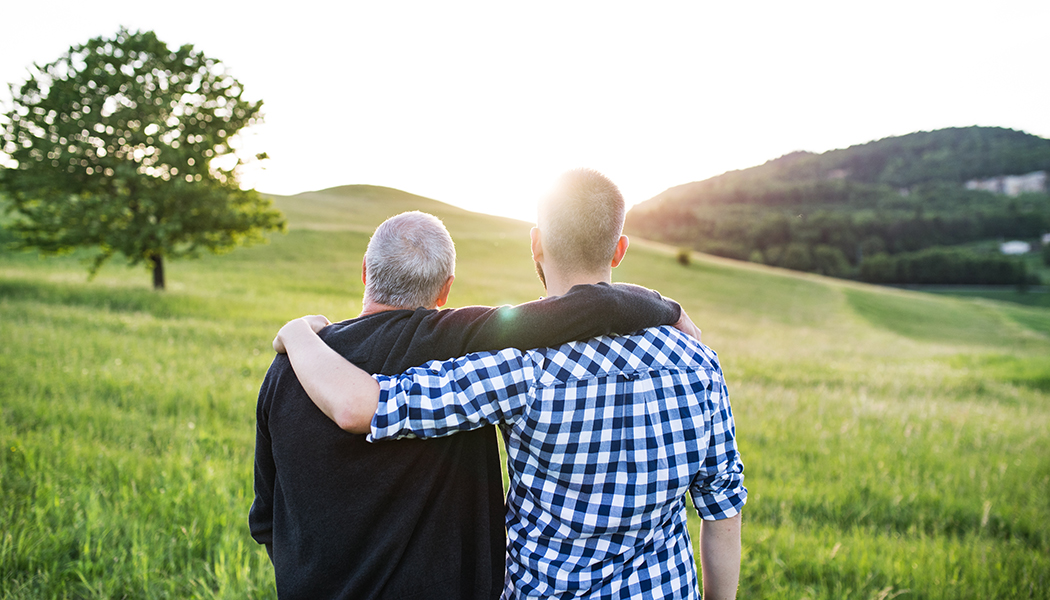 Self-examination is key to early detection and successful treatment of testicular cancer. Teaching self-examination however, is often forgotten, which can lead to deadly consequences.

Fathers leave a lasting impression on their sons. Whether teaching their favorite sport or providing heartfelt life advice, a father is a boy’s first best friend. For Ryan Parker, his father was his own personal hero. In autumn of 2017, however, that statement became more accurate than Ryan could have ever imagined.

“My dad is a traditional Midwest manly man,” Ryan began. “He believes in getting his hands dirty and he also believes in taking good care of oneself. He taught me how to fix my car, groom my facial hair, and the importance of preventative health.”

Ryan’s first memory of hearing about self-examining his testicles is from his preteen years. First thinking it was a joke of some sort, Ryan laughed off his dad’s antics. When his father realized that Ryan hadn’t been taught about self-exams, he jumped into lecture mode.

“He kept asking what else they are forgetting to teach in my health classes,” Ryan shared. “I was really shy about it at first, and that seemed to make my dad want to talk about more uncomfortable stuff. That was kind of the beginning of our open relationship. Every once in a while, he would ask if I’ve been taught about something, like safe sex, and then segway into a full-blown conversation regardless of my answer.”

As Ryan continued to grow, the conversations with his father seemed less invasive and awkward and far more natural. Nearing the age of thirty, Ryan continued administering self-examinations as mindlessly as putting on antiperspirant. It was a silent habit, until one day he noticed a lump.

“The first thing I did was call my dad,” Ryan stated. “I knew that self-exams were important and I probably knew that I should go to the doctor, but I called my dad because he never told me what to do if I actually found something!”

The next month was filled with appointments and referrals. Ryan was pushed from office to office, specialist to specialist, before hearing what he had already assumed: he had testicular cancer. The doctors assured Ryan that it was an extremely treatable cancer and that after a small surgery, he would be cancer free. The surgery, however, was not something to which Ryan eagerly agreed.

“I was almost thirty years old, but I felt like a high schooler,” Ryan laughed. “What if I got teased in the locker room for only having one testicle?”

Along with worrying about the perception of only having one testicle, Ryan was also concerned about whether he and his long-term girlfriend would be able to have children. The doctors assured him that pregnancy would still be possible, but Ryan was extremely hesitant to move forward.

“Of course, you can imagine my dad’s reaction,” Ryan said. “He asked how I would be able to have children if I died first. He followed up with some kinder words and of course I went forward with the surgery – I was always going to; it just took some time to accept.”

“I don’t know how long that small lump would have lived there if I didn’t do regular exams,” Ryan continued. “My dad is my hero in a lot of ways, but it’s definitely not an understatement to say that his invasive and embarrassing conversations may have saved my life.”

According to Ryan’s father, teaching children exciting hobbies is one the best parts of parenthood. But, much like every other part of life, there are challenges that come along with raising children. The most challenging, perhaps, is making sure that they have the skills, confidence, and knowledge to care for themselves. Preventative health may not be as fun as baseball, but can save the life of children, and even, succeeding generations.  This Father’s Day take a page from Ryan’s dad’s book and teach the importance of preventative health.

To properly perform a self-exam, men should:

Why Are Men More Vulnerable to COVID-19? Research Is Gradually Uncovering the Truth

Stay connected with us! Receive our monthly e-newsletter and blogs featuring stories of inspiration, support resources, cancer prevention tips and more. Sign up below!

Your ticket for the: My Dad, My Hero: Ryan’s Story

My Dad, My Hero: Ryan’s Story