Determined to Give Back: Larry Woody’s Supporter Story - NFCR

Determined to Give Back: Larry Woody’s Supporter Story 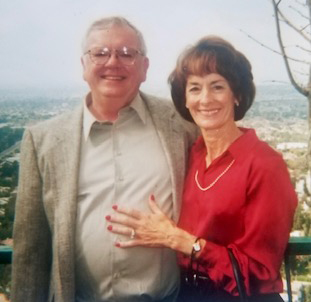 An estimated 22,530 new cases of ovarian cancer will be diagnosed in 2019. Researchers are working hard to provide early detection and screening solutions to women. The field of early ovarian cancer detection is expanding, and National Foundation for Cancer Research donor, Larry Woody, is focused on supporting it.

“Cancer is a serious problem that’s everywhere and it should be treated by professionals in many ways. I hope my support advances knowledge to release the cure or prevention of cancer,” Larry said.

Larry is originally from southern Illinois but traveled all over the United States for his career.  After graduating from Southern Illinois University, Larry took a job as a contract specialist with the federal government. He then went on to work as a planner for Ford Motor Company, where he lived in metro Detroit for a number of years. Eventually, Larry settled in southern California, where he lives today and works as a real estate investor and developer.

Larry and his wife were married for more than 40 years when she passed away of ovarian cancer in 2006. The passing of his wife sparked Larry’s interest in cancer research.

“NFCR had a program for early detection of ovarian cancer at that time. That was about 14 years ago,” Larry said.

He is referring to research conducted by Dr. Robert Bast, an NFCR scientist who received 18 years of NFCR funding for his revolutionary research in ovarian cancer prevention. He is best known for developing the first useful biomarker for monitoring the course of patients with epithelial ovarian cancer in 1981. A large clinical trial that involved 200,000 women proved that Dr. Bast’s approach to ovarian cancer detection, using this biomarker, effectively reduced fatalities by 20%.

Motivation to support cancer research stems from Larry’s own cancer battle as well. In 2005, Larry was diagnosed with colon cancer that was treated through an operation. More recently, Larry had a bout of sepsis and was in the hospital for seven days where doctors found cancer in his right kidney. Doctors were able to remove the kidney and, with it, the cancer.

“I’ve done well in my career, so I feel that I need to help others in some form. I get frustrated because there are many causes and many kinds of cancer,” Larry said. “Early detection is great, but it is just a small portion of what needs to be done.”

With generosity reaching beyond the cancer research field, Larry gives to charities within his community. He actively contributes to local music endeavors including the Pacific Youth Symphony Youth Wind Ensemble (PSYWE), a music ensemble with more than 200 high school students. His support reaches local students through the Woody Youth Fund.

“I hope to help kids of high school age further their interest and abilities with music. PSYWE is the first wind ensemble that was directly tied to a professional symphony.”

Looking to the future, Larry said he wants to live a life that helps others further their lifestyles. On a greater scale, his support is helping to save lives.

Your ticket for the: Determined to Give Back: Larry Woody’s Supporter Story

Determined to Give Back: Larry Woody’s Supporter Story