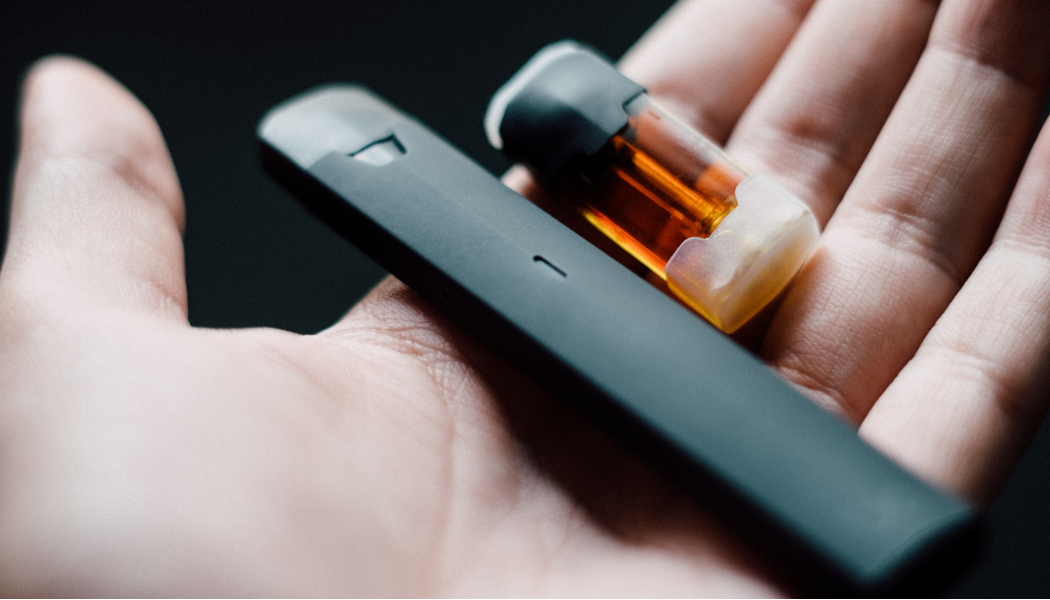 When it hit the market in 2004, vaping (e-cigarettes) was marketed as a hip, sexy, and even healthier alternative to smoking. Millennials, just coming of age, took the bait and ran with it; one study of the youth population shows, 27.5% vape on a regular basis, a number approximately 22 percentage points greater than high schoolers smoking conventional cigarettes. However, as a wave of high-profile vaping-related lung ailments, since dubbed EVALI — E-cigarette, or Vaping, product use-Associated Lung Injury  — began to hit the headlines, the medical community quickly issued a unanimous watch-cry: Like smoking, vaping is injurious at best and deadly at worst.

Vaping devices turn pre-packaged liquids into an aerosol that is then inhaled. Depending on the manufacturer, those liquids contain mixtures of water, propylene glycol, glycerin, flavorings, nicotine and in some cases, THC, the high-inducing chemical found in marijuana. Several of these components are deleterious: when vaporized, propylene glycol converts to formaldehyde, a known carcinogen. Vitamin E, found in THC, has oil-like properties that can coat the inside of the lungs, leading to breathing difficulties so severe that EVALI sufferers in their teens can have lungs equivalent to a two-packs-a-day smoker in their 60s.

The reasons how and why vaping became so popular so quickly are myriad. Apart from snazzy ad campaigns tapping celebrities such as Stephen Dorff, vaping allows consumers to customize their experience, such as the amount of nicotine used. Compared to cigarettes, vaping is cheaper, smells better, and cannot cause an accidental fire (smoking causes approximately 30 percent of fire deaths in the USA). Moreover, vaping cartridges come in flavors such as raspberry and cotton candy, making vaping appear to users as an inhaled snack rather than an addictive or dangerous behavior.

Legal action is already underway: A mother filed the first vaping-related wrongful death lawsuit in October against popular manufacturer JUUL Labs after her “JUUL-addicted” son died in his sleep.

As of November, 2019, the Centers for Disease Control and Prevention counted 2,290 EVALI cases and 47 vape-related deaths in the USA. Those deaths cross several generational divides, with the youngest at 17 and the oldest at 75, disproving vaping’s perceived youthful associations. That being said, according to a September 2019 survey conducted by the American Society of Clinical Oncology, 1 in 5 young adults between ages 18 to 38 vape daily or recreationally, and 1 in 4 young adults believes vaping is not only harmless, but not addictive.

States and other municipalities are now restricting certain aspects of vaping, such as limitations on flavor options, permissible locations, and sales to minors.

JustAGuyThing.com. (2019). 5 Reasons Why Vaping Is So Popular. Retrieved from: https://www.justaguything.com/why-vaping-is-popular/

Pecorelli, Alessandra et al. (2014). Are E‐cigarettes a safe and good alternative to cigarette smoking? Annals of the New York Academy of Sciences. Retrieved from: https://nyaspubs.onlinelibrary.wiley.com/doi/abs/10.1111/nyas.12609

UC Davis Health. (2000). Study Shows Smoking Is A Leading Cause Of Fire Disaster And Death Worldwide, Costing Over $27 Billion Yearly. Retrieved from:

Vapoholic. (2017). Why Is Vaping Becoming So Popular? Retrieved from: https://vapoholicsite.wordpress.com/2017/09/01/why-is-vaping-becoming-so-popular/

Your ticket for the: Vaping: It’s Deadly