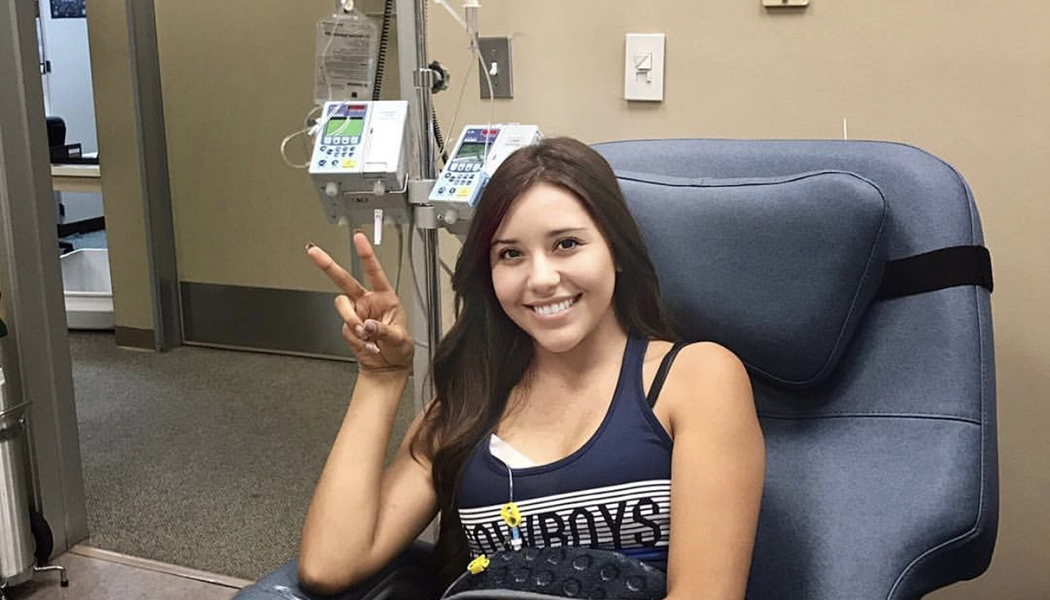 If anyone met Andrea Andrade today, they would be introduced to a beauty pageant queen, motivational speaker, philanthropist and cancer advocate. She’s volunteered and donated to cancer centers in her hometown of Fresno, California and buys wigs for women going through chemo. What you may not know is the incredible story of what led her to who she is today.

When Andrea was 26, she traveled to Mexico with her grandma to visit family. While she was there she began experiencing excruciating cramp-like pains and bleeding. This wasn’t abnormal; Andrea had irregular bleeding leading up to this day and had been diagnosed with endometriosis years earlier. The pain was consistent with that condition.

“Given my age, I now realize why doctors would never suspect cancer,” Andrea said.

The pain became unbearable, so Andrea and her grandma went to the hospital. Doctors told Andrea she had lost three pints of blood and they didn’t have enough donated blood to give her a transfusion. She was told she wouldn’t make it past that night and her grandma called her parents to ask them to come and say their goodbyes. Andrea’s dad refused to accept his daughter’s fate and told the medical staff to do whatever they could to keep her alive.

“My parents brought in truckloads of people from my little town to donate blood. And we finally got enough blood to where I could get the transfusion,” Andrea said.

After running tests, doctors told her parents that she had stage III colon cancer and that she would not make it longer than six months even with chemotherapy. In Mexico, medical information is given to whoever is paying, not the patient. Andrea wasn’t aware of her diagnosis for two weeks.

Her parents moved Andrea to Fresno, California after one week in the Mexican hospital. She went to the emergency room with the biopsy she had received in Mexico, still unaware of her official diagnosis. It was an American doctor who broke the news to her that she had stage III colon cancer.

Andrea’s treatment included colorectal surgery to remove the tumor and most of her large intestine. She had to wait four months to start chemotherapy because she was unemployed and didn’t have medical insurance.

“Once my doctors told me I had a short amount of time to live, I didn’t hesitate. So I applied to be a contestant,” Andrea said. “If I was going to die, I wanted to experience my lifetime dream.”

Miss California USA is one of the toughest competitions you can be in. Andrea knew going in to the pageant that she wouldn’t be able to compete at the same level of pageant contestants that had been training since childhood. She couldn’t workout the way they could, she didn’t have the energy to eat properly and she didn’t have the years of professional training many of the other women had. Her hair was falling out, her skin was changing color and chemo was still coursing through her veins. But she was determined to know what it felt like to be in a pageant, so she packed up her bags and went to Long Beach, California for the three-day pageant.

“Even though I couldn’t even walk or take the time to prepare, I was limited because I was always going into treatment, I was able to do it. Nothing was going to stop me. I participated while I was in chemo,” Andrea said.

“The congeniality award is awarded based on personality and who you are as a person. I started seeing life completely different after that,” Andrea said. “If I couldn’t win, at least I was kind and supportive of other women because that’s who I am as a person.”

While she was sick, Andrea’s aunt said something that stuck with her: “God gives his toughest battles to his strongest warriors.” The phrase is now engraved on the chemotherapy bell that Andrea donated to a new cancer center in Fresno. Patients ring it when they finish treatment as a sign of victory.

Your ticket for the: Faces & Voices of Cancer—In-Depth: Andrea Andrade