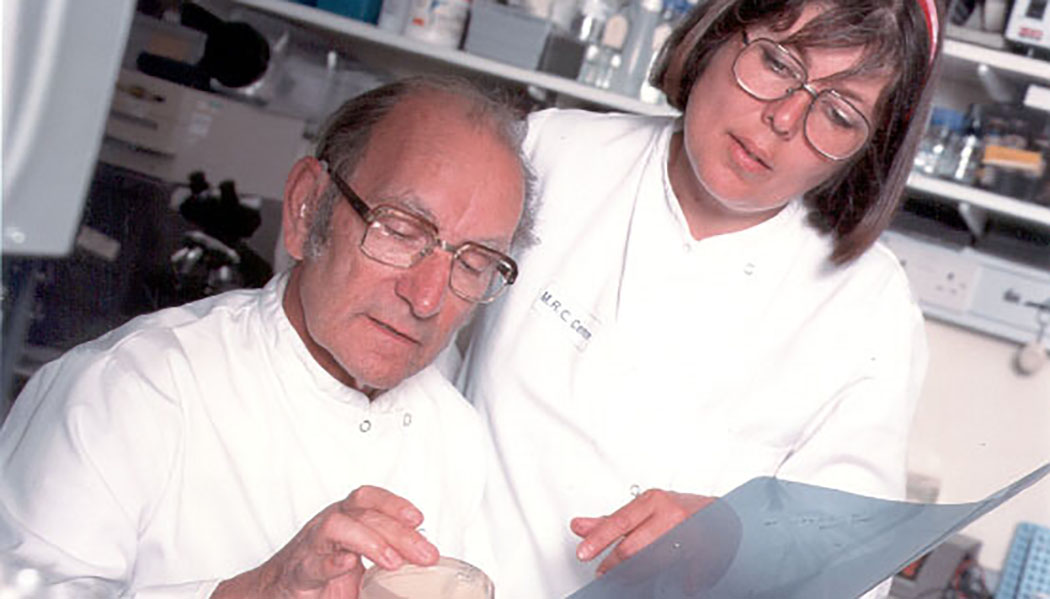 They are called “mAbs,” short for monoclonal antibodies, and they are a big deal in oncology. One of the immune systems most elegant soldiers, mAbs are formed by B cells, a type of white blood cell produced in the spleen, in response to specific foreign invaders (real and perceived) known as antigens, and humans are capable of producing billions of billions of differing kinds. They are so potent in the fight against cancer that when the late Dr. César Milstein, along with Georges Köhler, created the first technique to produce mAbs in the lab, the innovation won him a Nobel Prize in 1984.

“What attracted me to immunology was that the whole thing seemed to revolve around a very simple experiment: take two different antibody molecules and compare their primary sequences,” Milstein was quoted as saying. “The secret of antibody diversity would emerge from that.”

Argentine by birth but based in Cambridge, England, Milstein was an NFCR-supported scientist from 1984 until 2000, and during his tenure with the organization, he further studied mAbs, particularly their vast diversity, and refined and improved upon their construction method, which he first pioneered. Ironically, when Milstein and his team published their work in 1975, it went largely unnoticed by the scientific community; it was only in 1977 that Sera-Lab, a small British company supplying animal serum reagents to the scientific community, commercialized the technology and moved it into the open market. But from that point, interest not only grew, it skyrocketed: today, the world antibody market is valued at an estimated $20 billion, and immunotherapy is one of the hottest fields in oncology.

At its heart, the reason mAbs are so popular is that, for all the scientific advancement in cancer cures, nothing can top the human immune system. And yet cancer is notorious for fooling the body’s defenses; in order to “refocus” the body’s natural defenses, mAbs work by attaching themselves to cancer cells, thereby making it easier for the patient’s body to recognize them as hostile. Whether lab- or nature-made, mAbs are remarkably diverse: one type, called checkpoint inhibitors, block the proteins cancer produces that “inhibit” a desired immune response, others prevent cancer cells from dividing, still others form the basis of the drugs Herceptin (trastuzumab), Avastin (bevacizumab) and Campath (alemtuzumab).

“We are at the beginning of a new era of immunochemistry,” Milstein said at the time, “namely the production of ‘antibody based’ molecules.”

He was not self-aggrandizing, nor was he understating. MAbs are now so instrumental to medicine, they have expanded out of cancer treatment and into therapies for acute transplant rejection, autoimmune disorders, and inflammatory diseases. Monoclonal antibodies are also widely used in diagnostics and for detection of key proteins, ushering in new generation pregnancy tests, blood type testing, immunohistochemistry, flow cytometry, fluorescence microscopy, and tests that use antibodies and color change to identify a substance. Of the 10 best-selling drugs in the world, six are mAbs therapeutics.

Milstein died in 2002 in Cambridge of a heart condition. In 2010, Un Fueguito (“The Little Fire”), a Spanish-language documentary directed by Ana Fraile was released and would be awarded Best Documentary by the Academy of Film in Argentina.

“Although the way ahead [for immunology] is full of pitfalls and difficulties, this is indeed an exhilarating prospect,” Milstein said. “There is no danger of a shortage of forthcoming excitement in the subject. Yet, as always, the highlights of tomorrow are the unpredictabilities of today.”

Your ticket for the: Breakthrough: Dr. César Milstein And The MAbs