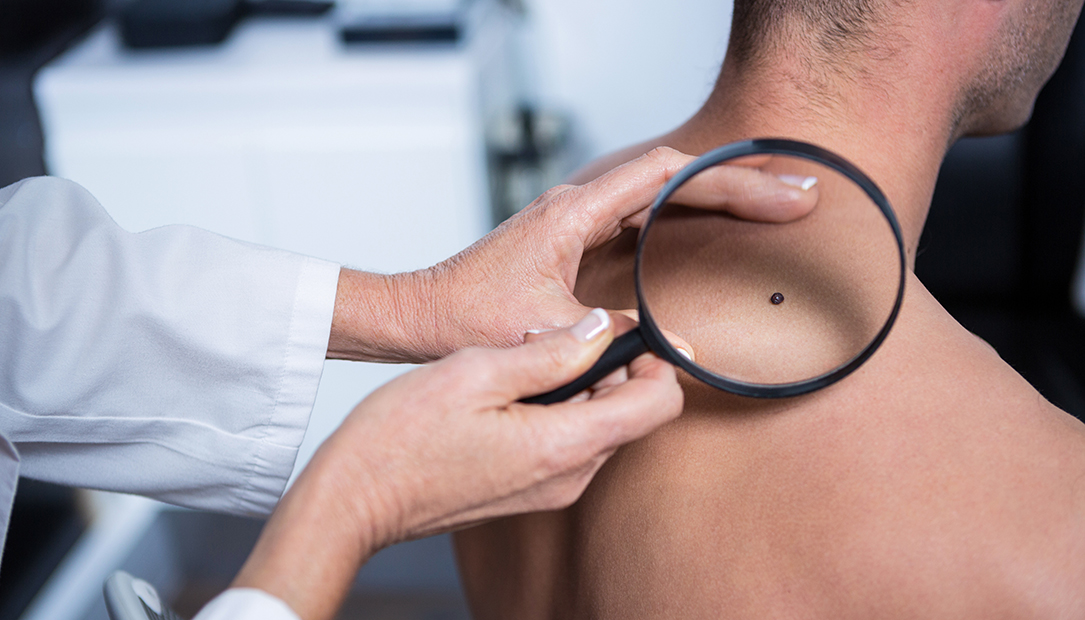 Skin cancer is the most common form of cancer in the United States. Approximately 9,500 people are diagnosed with skin cancer every day in the U.S. That’s well over 3 million diagnoses every year. Fortunately, skin cancer is one of the most preventable and treatable forms of cancer. The five-year survival rate for early detected melanoma is 99% and over 90% of melanomas are considered preventable. With that being said, one person dies nearly every half-hour from melanoma in the country. These statistics show the importance of awareness, prevention and early diagnosis for skin cancer, and they point to why an entire month, May, is dedicated to skin cancer awareness.

Basal cell carcinoma, squamous cell carcinoma and malignant melanoma are, respectively, the three most common forms of skin cancer. These three different cancers vary based on the cells within the skin, in which the cancer develops; the basal cell, the squamous cell or the melanocyte. The squamous is the most superficial layer, followed by the basal and, finally, the deepest, the melanocyte. Basal cell carcinomas generally don’t metastasize. As such, they are the least threatening of the three. They often appear as red bumps. Squamous cell carcinoma, on the other hand, can spread throughout the body. This cancer often appears as a red and/or scaly patch or bump. They are most common on the face, lips, ears and mouth.

Malignant melanomas are the most dangerous of the three and lead to the highest number of mortalities for Americans. These melanomas often develop around existing moles and tend to form irregular shapes with diverse colors. However, they can also appear to be bruise-like with slight underlying pigment changes. Malignant melanomas can even appear as a dark streak under the finger nail.

Skin cancer is a highly preventable disease that is strongly correlated with exposure to ultraviolet (UV) rays. Such UV rays are considerably genotoxic. In other words, they interfere with the normal functioning of the genetic material within a cell by causing it to mutate. This damage is caused both by the absorption of energy and the intermediate hazardous products that are produced via the UV energy. Ultimately, these rays cause DNA damage and errors in transcription. Both UVA (deep penetrating) and UVB (superficial penetrating) cause DNA damage. Ideally, free radical scavengers, like vitamin E, can help to “clean up” and remove these damaged DNA parts. Similarly, glutathione, the cells primary antioxidant, can help to remove dangerous by-products of UV radiation produces within the cell. However, if more damage is caused than can be repaired, the stage is set for cancer growth.

The best way to prevent the dangerous cellular cascade caused by UV radiation is by putting on sunscreen (or lotion with UVA and UVB protection) and by wearing protective clothing. The SPF (sun protection factor) should be at or above 30 (97% of UVB rays blocked) for extended activities and at or above 15 (93% of UVB rays blocked) for regular use. Since UV radiation does not always correlate with heat, it is important to wear sun protection regularly. It should be a part of normal healthy habits; similar to teeth brushing. In addition, it is recommended to avoid tanning beds and plan to be close to shaded areas on strong UV ray days. Finally, it is essential to find a dermatologist and schedule a minimum of one appointment per year. One blistering sunburn in youth more than doubles cancer risk later on in life. Given that cancer can develop over time and be in places that are hard to see, a trip to the dermatologist is truly the best way to ensure skin health.

Skin cancer is largely preventable and highly treatable, when caught early on. Don’t be a statistic! Save your life and the lives of those you love by wearing and promoting skin protection, developing safe sun habits and scheduling yearly dermatologist appointments.

Your ticket for the: Skin Cancer Awareness Month