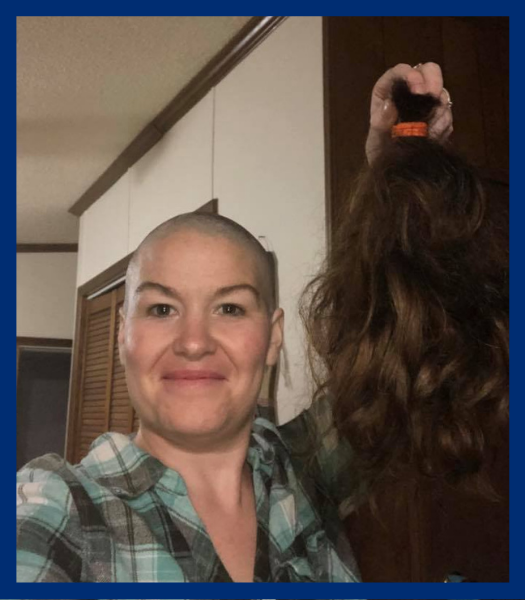 Sometimes life gets busy and all you can do is put your head down and focus. That was what the autumn of 2017 looked like for Brianne Jaeger. She was a busy mother of two in her mid-thirties juggling her office manager role and a busy social life. That autumn would be filled with fun and excitement, like weddings, camping trips, and local sporting game, but also filled with challenges as she supported a friend fighting for her life. She knew life would be busy…but she didn’t know the half of it.

“It wasn’t red or painful, and it was about the size of a pea,” She explained. “I was 35 and had no history of breast cancer on my mother’s side but I decided to see my doctor about it to be safe.”

A few days after meeting with her doctor, Brianne was on her way to the nearest hospital to undergo a mammogram. Almost immediately after the mammogram, she was scheduled for an ultrasound. Before leaving her appointment that day, she was scheduled for a biopsy. By mid-October, Brianne was sitting in the surgeon’s office with a doctor who seemed certain that visit would only be the start of a long journey. Though he had suspicions, he told Brianne that he would have to call her later to confirm the results.

“October 11th, 2017 was a day I’ll never forget and a day that changed my life forever,” Brianne reflected. “The doctor called me while I was at lunch and told me I had cancer. I had a thousand things going through my head and experienced so many emotions that week. We were preparing for a family wedding and a close family friend was very unwell…I couldn’t even think about how to process the fact that I had cancer.”

The upcoming weeks sent Brianne to more hospitals than she had been to in her entire life. Her final diagnosis was Triple Negative Breast Cancer, a very aggressive form of cancer. Though her MRI only showed a lump in the left breast, Brianne’s doctors recommended a bilateral mastectomy. While she instinctively knew she had to do what was best for herself, the thought was overwhelming. As she tried to process this recommendation, the medical team coached her through yet another procedure to confirm that she had no cancer in her lymph nodes. Time seemed to switch into superspeed, with Brianne starting chemotherapy less than a month later.

“One of the scariest things was thinking about what I was going to tell my children and how they would react,” Brianne recalled. “I didn’t think my daughter, who was only five, would understand. She asked if I was going to die and started crying. I didn’t know what would happen, but I told her mommy was going to fight extremely hard.”

Brianne’s first round of chemotherapy consisted of Adriamycin and Cyclophosphamide every two weeks for four weeks at a time. Her medical team advised that she would probably lose her hair after the second treatment; however Brianne had other plans. 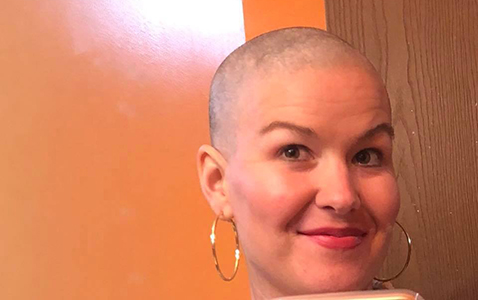 “One thing I wasn’t going to let cancer take was my hair,” She said. “I had my husband shave my head and just like that.  Bald was the new beautiful for me.”

“Some foods and drinks I could not handle while I was taking chemo and some I still can’t tolerate,” Brianne shared. “I developed sores in my mouth and nose. When I started my last 12 weeks on a different drug, Taxol, it wasn’t long before my liver functions tripled, and I went into SVT. They tried switching drugs but eventually I had to stop chemo for three weeks to get my liver function closer to normal. That seemed to fuel the fire as my tumor decided to grow.”

By the end of March, Brianne went through a bilateral mastectomy and began radiation, with another 18 weeks of chemo following soon thereafter. In November 2018, over a year since she identified the small lump, Brianne finished her final treatment.

“I had my fair share of setbacks,” Brianne expressed. “Not tolerating my treatment and ending up in the hospital for shortness of breath were both scary. But there are other things that still impact my life. I suffer from nausea and headaches, and not having had reconstruction is something I often struggle with. It’s difficult to explain that feeling.”

Despite her many challenges and setbacks, Brianne shared that she couldn’t have done it without the amazing outpour of support from loved ones near and far.

“One of the biggest things you need during a cancer diagnosis is your support system,” She said. “Mine was absolutely amazing. My husband, children, in-laws, parents, brothers…even my extended family offered so much support. Our friends, colleagues, and the entire community in our small town made this frightening experience so much easier.”

Mastectomy and Breast Reconstruction: What Breast Cancer Patients Should Know

5 Ways You Can Show Support for Breast Cancer

Your ticket for the: Stay Strong, Be Positive: Brianne’s Story