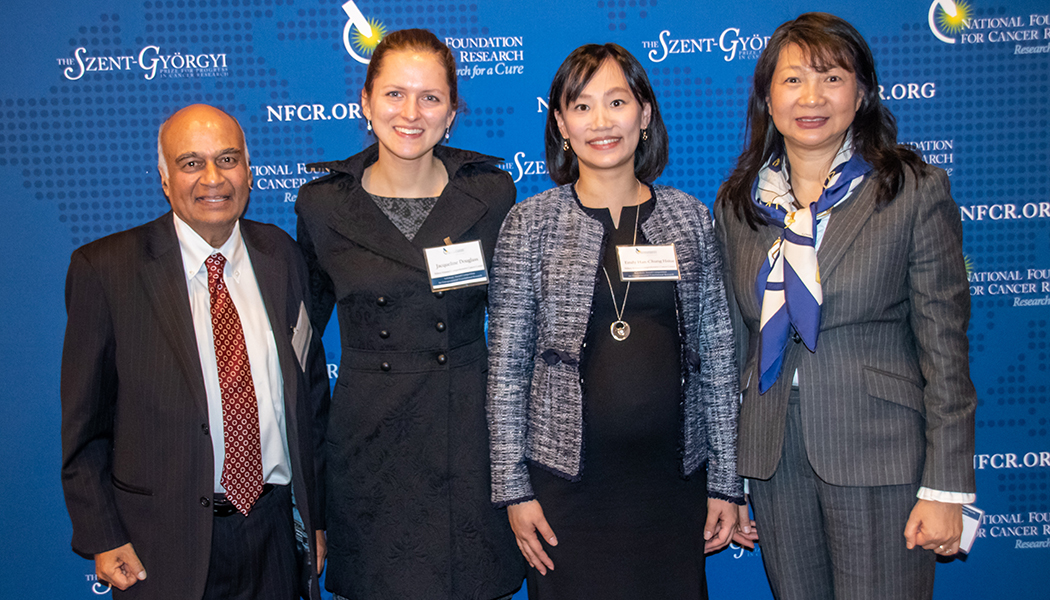 Johns Hopkins researchers Emily Han-Chung Hsiue, M.D., and Jacqueline Douglass in the Vogelstein/Kinzler Lab at the Sidney Kimmel Comprehensive Cancer Center have been researching MANAbodies, an entirely novel immunotherapeutic approach which could be a significant weapon against cancer and source of hope for patients. MANAbodies are bispecific antibodies that target “Mutation Associated Neo-Antigens” (hence, the MANA) that are bound to human leukocyte antigens molecules.

“MANAbodies direct the body’s own immune system to target mutations that are present only on the surface of the cancer cell,” explains Dr. Hsiue. “This results in specific cancer cell killing while leaving normal tissues unharmed.”

The National Foundation for Cancer Research recognized Dr. Hsiue and Ms. Douglass’s MANAbodies research project as the winner of its 2019 Salisbury Award Competition for Entrepreneurial Translational Research, which encourages and promotes innovative scientists and early stage companies to translate their discoveries into therapies that can improve the lives of cancer patients.

Excitingly, and as per the Salisbury Award program model, a new company is being formed to apply the MANAbodies research project’s derived technology in order to generate precision immunotherapies targeting common cancer-causing mutations. The AIM-HI Accelerator Fund, the venture philanthropy organization created by NFCR, will be one of the start-up’s first investors.

Researchers Hsiue and Douglass are exploring a new frontier, focused on making “personalized” treatments that can target the unique features that crop up around particular subsets of cancer.

“Our work epitomizes this concept in that MANAbodies target specific mutations that are present on the cancer cell surface,” says Ms. Douglass. “Each patient’s cancer has a unique set of mutations, although some of these mutations—that is, the so-called ‘shared’ mutations—are found in the cancers of many patients.”

MANAbodies target these shared mutations, allowing scientists and clinicians to move one step closer toward the goal of precision medicine.

The MANAbodies project was initially envisioned by primary investigator Bert Vogelstein, M.D., and Andrew Skora, Ph.D., then a post-doctoral fellow, in 2011. Recognizing the value of the Salisbury Award Competition, Dr. Vogelstein and Kenneth Kinzler, Ph.D., both of whom are former NFCR-funded scientists, encouraged their laboratory’s members, including those leading MANAbodies research, to submit applications.

“There is a huge chasm between a successful laboratory experiment and its translation to a new diagnostic or therapeutic agent,” notes Dr. Vogelstein. “Such translation nearly always requires interactions with industrial leaders who have the expertise needed to overcome the obstacles that lie within this chasm.”

“It is therefore important that young scientists in academia appreciate these challenges and work with industry to make their scientific breakthroughs become breakthroughs for patients,” he continues. “These interactions are precisely what the Salisbury Awards try to encourage.”

“The National Foundation for Cancer Research is an incredible organization in that it is willing to invest in and promote early stage projects, such as our own MANAbodies,” expresses Dr. Hsiue. “This award can help attract the investments which could push an idea that never gets out of the lab toward a viable therapy for use in humans.”

“We were very pleased to see so many innovative labs and early stage oncology companies competing for the Salisbury Award,” reflects NFCR President and CEO Sujuan Ba, Ph.D. “This program is designed to identify high-risk, high-impact, and high-reward projects and help accelerate the pace for them to get into clinics faster.”

CEO Emeritus Franklin Salisbury, Jr., one of founding family members of NFCR for whom the program is named, recognizes and promotes translating basic science research discoveries into new cancer treatments.

“I am so pleased that Dr. Hsiue and Ms. Douglass are the recipients of the Fall 2019 Salisbury Award for Entrepreneurial Translational Research,” Mr. Salisbury states. “This epitomizes NFCR’s founding vision to support the combined efforts by doctors and scientists to make possible new approaches of treating cancers.”

Your ticket for the: 2019 Salisbury Award Winners