Give It Your All and Fight: Sergeant Liniarski’s Story - NFCR

Give It Your All and Fight: Sergeant Liniarski’s Story 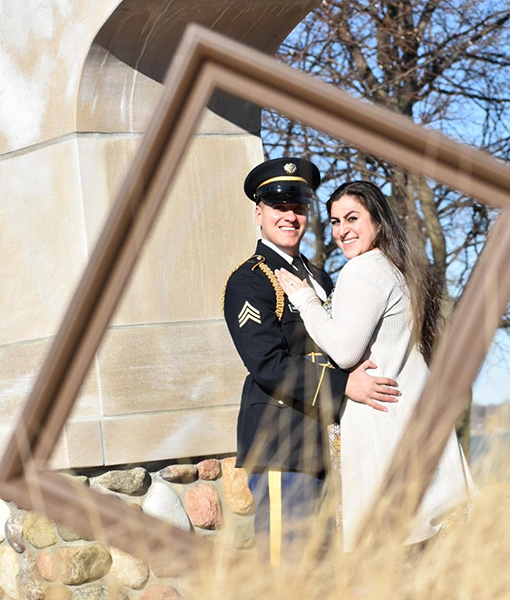 Carl J (CJ) Liniarski had found his calling in life at a young age.

He had joined the United States Army Reserve in December 2014 and was committed to serving his country. From his meticulous training to his healthy lifestyle, CJ put his heart and soul into his career. There was no obstacle big enough to slow him down.

However, in 2018, 22-year-old CJ noticed something was not quite right with his body. He started experiencing pain and bloating on the right side of his body. Knowing that he took exceptional care of his body, he was suspicious about the discomfort. When he found blood in his urine and began coughing up spots of blood, he became increasingly concerned and sought medical advice.

“At first, the doctors thought it was a cyst,” CJ explained. “However, with more testing and monitoring, we saw that it was growing extremely fast. It was apparent it was not a cyst, and I was eventually diagnosed with Stage 2 renal cell carcinoma, which is kidney cancer.”

The medical team explained that the tumor was larger than 7 centimeters but confined to the kidney. The doctors told CJ that they would need to remove the entire right kidney but assured him that he would be able to function with just the left kidney. Without a moment of hesitation, CJ was on the operating table and on his way to remission.

“My scars became keloids, which caused months of pain and soreness,” CJ said. “I still have issues with sit-ups, hot weather, working out, or anything else that causes the scars to become puffy.”

Though he still experiences great discomfort from his scars, CJ views the pain as simply another obstacle to overcome. He explained that the pain may not ever go away, but he didn’t want it to take control over his life.

“About a month after my surgery, I did a physical fitness test for the Army,” CJ shared. “I wanted to get back to living my life. After this test, I was awarded the Army Achievement Medal for outstanding dedication and commitment to fighting and overcoming this obstacle.”

“It was extremely challenging to accept that I wasn’t physically the same and that some activities were harder than they were before,” CJ continued. “But I’ve learned to be patient and accepting. It’s something that makes me an even stronger person now.”

“When I was diagnosed, I felt discouraged, sad, and angry,” CJ began. “It’s ok to feel that way, but it’s important to remember that it’s not your fault. You have to give it your all and fight. You’re a part of a family of millions of brothers and sisters who have had similar experiences. We have your back and will fight with you. You are never alone.”

“I’d like to thank all the medical staff, family, and others who help those diagnosed with cancer by supporting them when they need it most,” CJ expressed. “It’s because of these people that I am able to stand here today and serve the greatest nation and its amazing people. It’s because of them I wear my uniform with pride and continue to inspire and serve. I’m proud to be a kidney cancer survivor and be part of another amazing brotherhood of survivors and warriors.”

CJ’s story is a part of our Faces & Voices of Cancer initiative which uplifts and amplifies the stories of those who have been impacted by cancer. If you are interested in sharing your story, please visit Faces and Voices of Cancer at www.facesandvoicesofcancer.org.

Finding Self-Love and Healing in a Changed Body

Your ticket for the: Give It Your All and Fight: Sergeant Liniarski’s Story

Give It Your All and Fight: Sergeant Liniarski’s Story