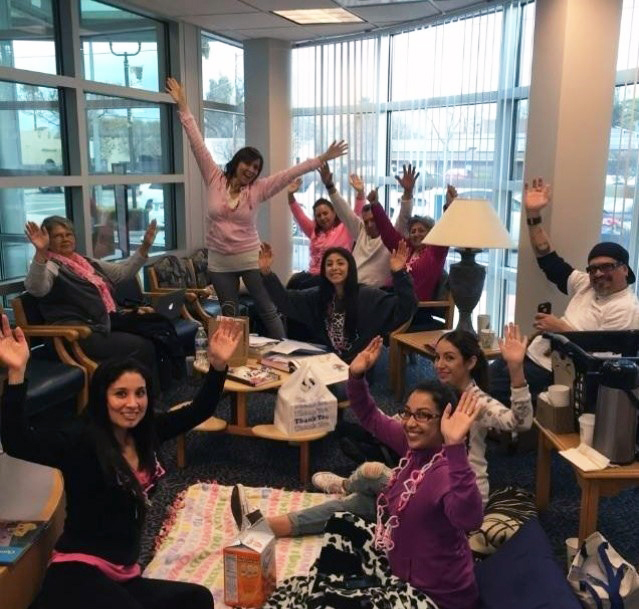 Desiree Maldonado’s story began around Thanksgiving 2014. She received a notice in the mail for her annual mammogram. It’s the holidays, Desiree thought as she tore it up and threw it in the trash, I don’t have time for this. A couple of years earlier, doctors found dense tissue in her breast which requires routine annual breast mammograms.

A few weeks later, on New Year’s Day, Desiree ’s husband saved her life when he found a lump in her left breast. It was like a small BB pellet under the skin that was hard and solid. It felt foreign, like it definitely didn’t belong there.

A whirlwind of appointments followed the discovery: primary doctor, mammogram, ultrasound and, eventually, biopsy. Due to medical circumstances, Desiree wouldn’t see a doctor for more than 20 days regarding her biopsy.

“During this time, I wanted to scream out loud over what I was going through, but I didn’t. I was avoiding my sister and sister-in-law’s phone calls. My mother lived with me and I was avoiding eye contact with her. I didn’t want to scare her,” Desiree recalls. “I had a lot of days and sleepless nights to think about what I wanted to do. The main thought running through my mind was that I had grandbabies to meet one day.”

Desiree finally told her sister, who lived in Hawaii, that she needed her to fly in to California and be with her for support. The day her sister flew in, Desiree was called in to the doctor’s office and was told those three words that no one ever expects or wants to hear.

Desiree ’s response, however, was tearless: “What’s the plan? I am not going anywhere!”

That February, Desiree chose to undergo a double mastectomy. Oncologists gave her options for a smaller procedure—a lumpectomy or single mastectomy—but she wanted the tumor totally eliminated.

“I had zero concern about what [the procedure] was going to do to my body or the valley I would have to walk afterwards,” Desiree states. “I was just determined to remain here and I wanted to do whatever it took to do just that—to remain here on earth.”

Four weeks later, Desiree started eight rounds of aggressive chemotherapy treatment. During her very last week of treatment, she’d learned that would be meeting her first grandchild in nine months.

“To me, that was a gift from God—an award for completing chemo and trying to be content without complaints while going through it,” says Desiree. “That child, to this day, can bring me to tears with gratitude for being here.”

However, the new soon-to-be grandmother grappled with self-image issues—having a new body, underweight and covered in scars. She too is among 20% of breast cancer patients who are affected by lymphedema, a side effect that causes abnormal swelling in the limbs or breasts.

“Every day when I got out of the shower was a task to remain grateful for merely breathing,” Desiree admits. “It was a struggle to trust God completely and believe that there was something better to come of this situation. But I was determined that his plan for me was greater than any of what I was going through.”

Thanks to a trusted plastic surgeon, Desiree underwent reconstructive surgery. Six month later, she elected to get mastectomy scar cover-up tattoos. Today she can face a mirror again and look beyond the scars of what her body has endured.

The journey through the last three years has showed Desiree how strong she is and has called her to a higher purpose.

“If you trust God and contently wait your turn, there is most definitely beauty,” Desiree confidently summarizes.

“I will never stop sharing my story and reminding women to conduct monthly breast self-checks,” she encourages. “It is my duty to limit the number of additional women who might endure this journey. And if I can help one person not feel alone in this battle, I will have fulfilled my purpose.”

Breast cancer survivor: It is a crown that Desiree wears proudly.

The National Foundation for Cancer Research, co-creator of Faces & Voices of Cancer, thanks Ms. Maldonado for her Winter 2019 testimonial

Your ticket for the: Faces and Voices of Cancer—In Depth: Desiree Maldonado