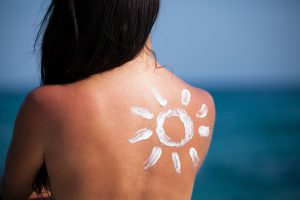 Let’s just dispel the myths now: There is no such thing as a “healthy tan.” Outside of a full suit of armor, there is no such thing as “sunblock;” in fact, the Food and Drug Administration banned the use of the term. You can get skin cancer in places that have never seen the light of day, much less sunburn, such as the inside of your mouth and eyelids.

“And people with darker skin tones are still at risk,” says Dr. Maral Skelsey, Director of Dermatologic Surgery at Georgetown University and the Director of the Dermatologic Surgery Center of Washington. “They have a higher rate of squamous cell carcinoma, and these can arise not just in areas where there is a lot of sun exposure, say on the head and neck, but also in areas that have been chronically scarred and in wounds that are long-standing, along with areas that have been burned.”

It is the most common cancer in the United States; one of the easiest to detect; and one of the simplest to prevent. But that has stopped neither the 76,665 people from being diagnosed with melanomas of the skin in 2014, alone, nor the 9,324 people to die from it in the same year. As the Northern Hemisphere gears up for swimsuit season, the chorus of doctors and cancer organizations are again sounding the warning cry to “slip, slop, slap and wrap” — slip on a shirt, slop on sunscreen (SPF 30 or higher), slap on a hat and wrap on some UV-protective sunglasses.

UV, or ultraviolet, light is the same electromagnetic wavelength that makes black-light posters glow and exists just beyond the frequency human eyes can register. An energetic form of light naturally produced by the sun, it spans the range between visible light and the even more energetic X-ray wavelengths. It is also the causal agent for suntans, sunburns and most skin cancers.

“Ultraviolet light damages DNA in our cells, triggering mutations,” says Skelsey. “Our bodies are constantly making mutations, but is able to correct them. But with prolonged and extensive damage, you can no longer make those corrections. The more UV damage you have, the more propensity there is to damage the DNA in your cells and the balance tips to malignancy.”

Skin cancers come in three types: basal cell carcinoma, squamous cell carcinoma and the deadliest form, melanoma. Each presents itself differently; basal cell looks like a flesh-colored, pearl-like bump or a pinkish patch of skin, whereas squamous cell can start off as a red, firm bump, scaly patch, or a sore that heals and then reopens. Melanoma often develops in an existing mole or suddenly appears as a new, particularly dark spot on the skin.

Skelsey mentions a mnemonic device dermatologists often use, the “ABCDE’s” — A is for asymmetry; if one draws a line down the middle of a suspicious mole or freckle and it is not the same on both sides, that is something to be examined. B is for “border that is irregular,” any sort of mark that is or becomes blobby in shape is also cause for concern. C is for color; if a patient finds something all different colors or the color changes, it should be brought to the attention of a doctor. D is for diameter; anything bigger than a pencil eraser should be checked. E is “evolving,” anything that changes, or if it is new and changing, Skelsey strongly recommends seeing a doctor.

She also provides some fast rules on skin cancer prevention, such as wearing opaque clothing and broad-brimmed hats, and scheduling outdoor activities either before 10 AM or after 2 PM, when the sun is not as high in the sky. A part of everyone’s summer get-up-and-go routine, alongside hairstyling and shaving, should be the application of water-resistant SPF 30+ sunscreen 30 minutes before going outside, and frequent touch-ups throughout the day, particularly for people with very pale skin. Several brands sell travel-size mini-bottles that can slip easily into a purse, briefcase or backpack for on-the-go use.

So the good news is that skin cancer can be fairly easy to prevent. The bad news is that whatever your skin tone, using UV light to darken it is unwise at best, Russian roulette at worst.

Your ticket for the: A Skin Cancer 101