The Bond Between Mother & Daughter: Caring for Mom through Cancer

The Bond Between Mother and Daughter: Kathy’s Story 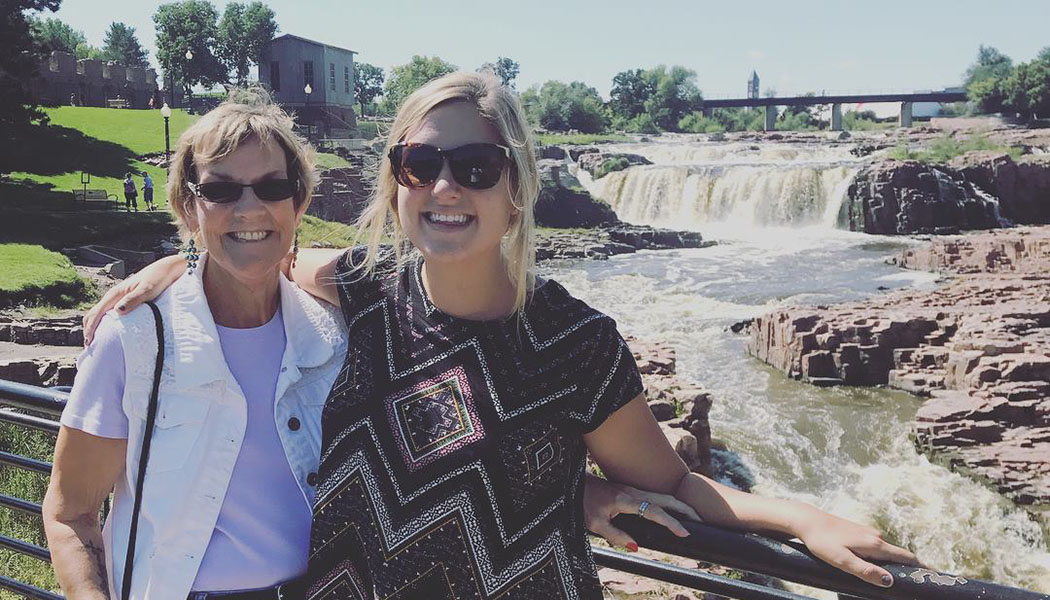 The bond between a mother and child is a bond unlike any other. Mothers spend years sacrificing for their children, from sleepless nights to accepting that privacy and free time are foreign concepts to a mother. Nearly every mother, however, will state that these sacrifices are miniscule compared to the benefits of raising a best friend. Kathy Lijewski has always loved being a mother to her three children, but in 2016 her relationship with her daughter Abbey Idalski grew in ways neither of them could have imagined.

Despite living on opposite sides of the country, the mother-daughter duo had a strong, fun, and loving relationship. From traveling together to attending concerts side-by-side, life was always exciting and filled with laughter. Though they were both willing to do anything for the other, neither Kathy nor Abbey expected that theory to be put to the test.

“In August 2016 I went to the doctor because I had a small lump on my neck,” Kathy shared. “I had no other symptoms aside from extreme fatigue. I was told the lump was nothing, but five months later we found out it was stage 4 head and neck cancer.”

While Kathy was receiving this news in Michigan, her daughter Abbey was serving as a US Marine in California. Kathy was scheduled for a surgery to remove the cancerous tumor from the base of her tongue, but the surgery was unsuccessful. At this point, Kathy made the difficult decision to receive treatment from the Mayo Clinic in Minnesota – over 700 miles away from her home and family. Upon learning this, Abbey was eager to jump on the first plane to be there with her mother.

“I had to put up a fight to get orders to Minnesota,” Abbey explained. “A Master Sergeant of mine told me that if the Marine Corps wanted me to have a mom dying of cancer, they would have issued me one. After that, I went straight to my Colonel and was on a flight the next day with orders in my hand to check in to my new duty station.”

As soon as Kathy checked in to the Mayo Clinic, she was greeted by a team of doctors and was scheduled for surgery the next morning. The surgery was successful, but her time at the Mayo Clinic was only just beginning. After having four weeks to heal and recover in her own home, Kathy and Abbey returned to Minnesota to start six weeks of radiation and chemotherapy.

“The treatment wasn’t bad until around week three,” Kathy recalled. “My appetite diminished, and I could not eat, drink, or swallow. Abbey would beg me to eat but it was like swallowing dry wall. By week four I was too weak to walk. Abbey had to push me in a wheelchair for treatment.”

Kathy continued receiving treatment, but her condition was rapidly declining. She was placed on a feeding tube as her weight dwindled to skin and bones. She developed blood clots in her leg, abdomen, and lungs.  As Kathy grew more and more unwell, it became clear that she would need to stay at the Mayo Clinic for longer than six weeks.

“My mom could have easily given up, but she chose not to,” Abbey reflected. “I’m so proud of her incredible will to live. There were numerous times doctors told me she wouldn’t make it through the night, but she did – every time.”

“Abbey was my fierce protector,” Kathy shared. “She had the courage of a warrior and was faced with many difficult life-threatening decisions during my treatment. She took me to treatment every day and sat with me for hours during chemotherapy. She showered me, encouraged me to walk, fed me and gave me medication through my feeding tube. Abbey was my sole support through it all.”

After twelve long weeks, Kathy was finally able to go home. Even without the feeding tube, Kathy experienced great difficulty eating. Her sense of taste had greatly weakened, and she accepted that it was her new normal. For the next year, Kathy continued visiting an infusion center three times a week to get hydrated with an IV to keep her alive. She remained dangerously thin for two years and continues to struggle with swallowing three years later. Though her journey with cancer was challenging and exhausting, the mother and daughter were able to grow closer while proving they truly are stronger together.

Your ticket for the: The Bond Between Mother and Daughter: Kathy’s Story

The Bond Between Mother and Daughter: Kathy’s Story