In 2014, a few short weeks after celebrating his 3rd birthday, Trey Fry was diagnosed with leukemia. Needless to say, this was a life-altering event for Trey and his family. 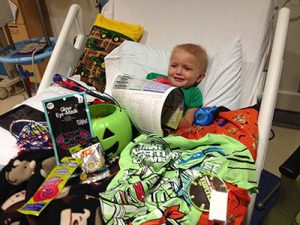 Like so many, Trey fought his way through several rounds of chemotherapy. His cancer even relapsed and Trey required a bone marrow transplant. Trey’s seven-year-old brother, was his donor. One year after his initial diagnosis, Trey was in remission and remains so today.

Prior to his diagnosis, Trey was often found visiting and cheering on the York College Girls Field Hockey Team coached by his aunt Carly Zinn. To honor his recovery and raise awareness for childhood leukemia, the team rallied together to dedicate one special game to Trey.

What began as a rally behind a young supporter’s fight against leukemia has become a yearly tradition. Each September, Zinn holds an #ORANGEOUT in honor of leukemia and children’s cancer awareness.

Zinn now coaches at Dickinson College and has brought Trey and his fight with her. Even though the team at Dickinson wasn’t around to see Trey’s battle, they’re more than willing to support this courageous six-year-old.

As part of the tradition, Zinn’s team watches Trey’s story on a DVD. “It’s pretty intense and kind of a reality check” says Zinn.

To honor everyone they know that has been affected by cancer, Zinn asks the girls to fill out an ‘I Play 4’ sign. She says “It gives them extra motivation to play in that game.” 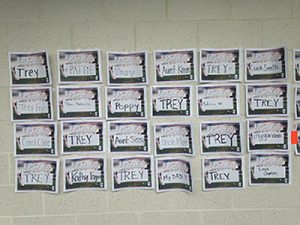 The team hangs their signs on the wall before being lead on to the field by their honorary captain for the day, which is Trey of course. As part of the team huddle, Trey can’t help but share the story about the goal he made in soccer that very morning. “Trey loves it and it’s great to see the girls with him, they have so much energy,” Zinn shares.

This boost in motivation and determination has translated to athletic success for these teams. According to Zinn, they always play extraordinarily well on Play4Trey day, so well in fact that one year when they held a goal pledge drive to raise money, the team scored 8 goals and now allow supporters to put caps on their pledges.

At this year’s game the team has a new goal in mind: get the community more involved. Outside of the t-shirt sales they usually do to raise money for leukemia research, the Dickinson Field Hockey team will provide a donation-based clinic open to the public immediately following their Play4Trey game.

Over the past two years, Zinn and her teams at both York College and Dickinson College have raised nearly $5,000 to support leukemia research through NFCR’s Play4TheCure program.

Along with donating the money they raise to cancer research, Zinn’s team collects and delivers toys to the patients at the Four Diamonds Hospital in Hershey, PA where her nephew Trey was treated for cancer.

To support the Dickinson Field Hockey team as they Play4Trey on September 30th in Carlisle, PA, visit https://www.crowdrise.com/play-for-trey.

Your ticket for the: Playing 4 Trey