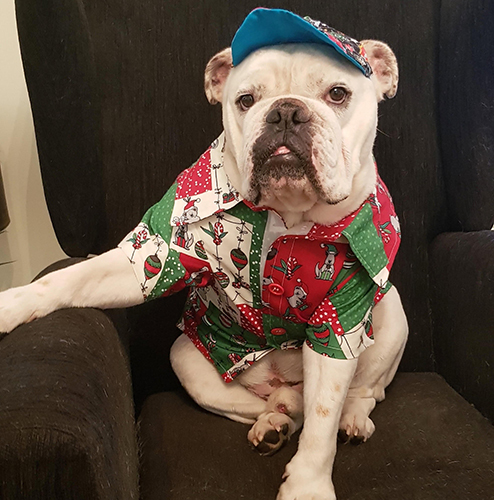 As the holiday season approaches, there seems to be an increase of generosity and selflessness amongst the general public. Everyone seems to be in a giving frame of mind as the holiday cheer embraces them. People are more receptive to donating to charitable causes or volunteering their time to improve the lives of others. George Wilson, the squishy-faced Aussie Bulldog, has found a pawesome and unique way to spread holiday joy to cancer patients in the hospital this holiday. He and his human Jai visit palliative care units together, brightening the days of those confined to the hospital. Having lost both her mother and father to stomach cancer, as well as being a pancreatic cancer survivor herself, spreading cancer awareness is a cause near to Jai’s heart. However, finding George and his natural gift at comforting cancer patients came as a complete surprise.

“After losing my parents, I was very grief-stricken and that’s why I actually got George,” Jai explained. “I was looking on Facebook and saw George who was born on my dad’s birthday. Since my dad had just passed months earlier, it seemed like a sign.”

Jai was quick to bond with George the deaf bulldog as she ran a rescue for deaf dogs. They were able to communicate with sign while Jai let George embrace his mischievous behavior. George was clearly a special dog to Jai, but it wasn’t long into their relationship before she realized that he had a special gift.

“I took George out for a walk one day,” Jai recalled. “We bumped into a family having a picnic and one of them was in a wheel chair. George wanted to say hello and I thought he was going to eat all of their food! He just sat there and stayed with [the woman in the wheelchair] for nearly two hours. I kept apologizing but she was happy to have him because she was only out of palliative care for the day.”

After observing how gentle and intuitive George was in this situation and how much joy he brought to the woman, Jai realized that George had the opportunity to make a big difference in the lives of palliative care patients. Soon after, Jai reached out to the medical team that previously cared for her parents and asked if she could bring George to visit. She and George were cautiously invited to roam the halls and have a chat with any willing patients. As Jai imagined, her squishy-faced bulldog breathed joy and happiness into the ward. As the care team observed the affect George had on patients, it wasn’t long until George and Jai were regular visitors on the ward. No matter the situation, George seemed to have a natural knack for connecting with people.

“George loves watching TV, but he doesn’t like to sit on the ground,” Jai explained. “He’ll sit in the chair next to the patient and watch TV with them. He’s very sedate, but if he senses someone who needs him or is maybe a bit lonely or anxious, he nudges his way into them. He’ll see someone on their own and just walk off on his own to go sit with them.”

As George became a common face amongst palliative care patients, Jai continued using him as a way to spread awareness for cancer. She launched an Instagram and Facebook account for George and posts weekly content for nearly 10k followers. They advocate for a different cancer each month, and encourage their followers (both humans and dogs) to do the same. They’ve even ran campaigns for individual patients.

“One patient was a young man with brain cancer,” Jai shared. “George and I would visit him regularly since he came on the ward. As things progressed, we launched a Beanies for Cancer campaign for him. We had about 900 dogs on Instagram wearing beanies and using the hashtag #BeaniesForSteven. I think just knowing that someone really did care about what was happening to him made a huge difference. We all go along in life and we don’t really think about what’s happening to each other. That’s something that George and I really want to change.”

Your ticket for the: Feliz Navi-dog: How One Pup Brings Holiday Cheer to Cancer Patients