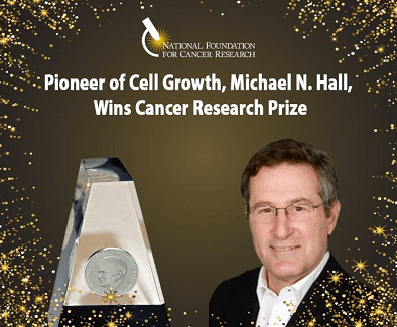 More than 170 guests enjoyed a fabulous Monday evening at the National Press Club recognizing Michael N. Hall, Ph.D., Professor of Biochemistry at the Biozentrum of the University of Basel in Switzerland, as the 2017 recipient of the Szent-Györgyi Prize for Progress in Cancer Research presented by the National Foundation for Cancer Research (NFCR). Attendees of the festivities included many world-renown research scientists, biopharmaceutical industry leaders, policy makers, the 2017 Prize Selection Committee, NFCR board of directors, donors and supporters. 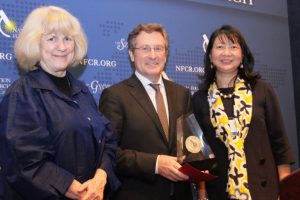 This year’s prize recognizes Dr. Hall for his breakthrough discovery of target of rapamycin (TOR), one of the most important cancer cell targets in the modern era of oncology.

Dr. Hall’s research shows that, as a central controller of cell growth and metabolism, TOR plays a key role in development and aging. When dysregulated, disorders such as cancer, cardiovascular disease, diabetes and obesity can occur. These findings have reshaped our understanding of cell growth and has had a significant impact in how disease is studied and treated.

Today, TOR inhibitors are used to treat kidney, breast, brain and pancreatic cancers, and numerous clinical trials are currently underway testing TOR inhibitors in the treatments of many types of cancer.

The dinner celebration featured a rare opportunity to hear from and ask questions of an esteemed panel of leading cancer research scientists. Moderated by last year’s prize winner, Dr. Mary-Claire King of University of Washington, Dr. Hall was joined on stage by Webster K. Cavenee, Ph.D., Ludwig Institute for Cancer Research; Chi Van Dang, M.D., Ph.D., Abramson Cancer Center at University of Pennsylvania; and William G. Nelson, M.D., Ph.D., Director of the Sidney Kimmel Comprehensive Cancer Center at Johns Hopkins. The panelists and an enthusiastic audience discussed many intriguing topics, including how nutrient uptake influences cancer and its treatment, and how a new clinical trial model, GBM AGILE, could reshape clinical testing of new treatments for aggressive brain tumors and potentially other types of cancer.
“The award of the 2017 Szent-Györgyi Prize to Dr. Hall is a wonderful recognition of his breakthrough discovery of TOR which has made possible many of today’s advanced anti–cancer therapies. His pioneering research is a great example of how laboratory research at the fundamental stage can impact cancer treatment and care for many patients around the world.”
– Dr. Sujuan Ba, NFCR President

The evening was jazzed up not only by intellectual conversation, but also by live jazz music and solo piano performed by students from the Landon School in Bethesda, MD. The performance entertained guests throughout the evening, while marking the launch of “Arts4TheCure”- a new fundraising platform established at NFCR that provides youth and young adults the opportunity to raise awareness and funds to support cutting-edge cancer research through fine arts and performing arts.

We congratulate Dr. Hall again on winning the 2017 Szent-Györgyi Prize, and look forward to another great ceremony next year!

Michal N. Hall, Ph.D., is Professor of Biochemistry at the Biozentrum of the University of Basel in Switzerland. In 1991, Dr. Hall demonstrated that a central controller of cell growth and metabolism existed, which he later named target of rapamycin (TOR). Prior to his discovery, a central controller of cell growth was not thought to exist. His discovery has revolutionized the study and treatment of cancer, cardiovascular disease, diabetes, obesity and more. Dr. Hall is a member of the U.S. National Academy of Sciences and has received numerous awards for his groundbreaking research, including the Cloëtta Prize for Biomedical Research (2003), Louis-Jeantet Prize for Medicine (2009), Marcel Benoist Prize for Humanities or Science (2012), Breakthrough Prize in Life Sciences (2014), and the Canada Gairdner International Award (2014). 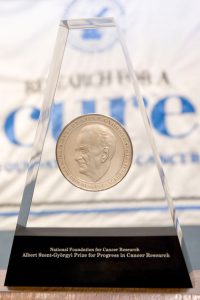 NFCR is committed to upholding Dr. Szent-Györgyi’s vision of curing cancer through innovation and collaboration. As part of this commitment, NFCR has established this prize to honor scientists who have made extraordinary progress in cancer research and to focus attention on the essential role of basic research in finding the still elusive answers to the mysteries of cancer.

The Szent-Györgyi Prize serves to stimulate the quest for continued investment in the pioneering research that will produce scientific breakthroughs and lead to a deeper understanding of the scientific concepts behind the genetics and molecular makeup of cancer. By calling attention annually to achievements in this area, it is our desire to heighten awareness of the kind of research and discovery that must be accomplished before we can hope to produce cancer cures.

Your ticket for the: 2017 Szent-Györgyi Prize for Progress in Cancer Research Awarded to Michael N. Hall