Learn About the Vitamin-C Studying, Nobel-Prize Winning Co-Founder of NFCR

Born in Budapest, Hungary on September 16, 1893, Albert Szent-Györgyi’s early life was filled with studying and interrupted by war. Szent-Györgyi was a medical student at the University of Budapest in 1911 and, during his studies, left to fight in World War I.  He was awarded the Silver Medal for Valour and was discharged after being wounded in action. He returned to medical school and graduated in 1917 as a doctor of medicine.

He studied, worked and taught in labs in Prague, Berlin, Leiden, Hamburg and Cambridge in the 1920s and 1930s. Dr. Szent-Györgyi’s early research was focused on the chemistry of cell respiration.

Dr. Szent-Györgyi was a pioneer and, like many explorers, he challenged the conventional thinking of the day to pursue his novel and promising ideas. He won the Nobel Prize for his study of vitamin C and cell respiration in 1937.

Dr. Szent-Györgyi was a Visiting Professor at Harvard University in 1936 and, earlier, conducted research at the Mayo Clinic in Rochester, Minnesota, but he spent the years during World War II in Europe. As World War II approached and fascists gained control of the Hungarian government, Dr. Szent-Györgyi helped Jewish friends flee the country. It is alleged Adolf Hitler personally ordered Dr. Szent-Györgyi’s arrest and, for part of the war, he was hiding from the Gestapo. 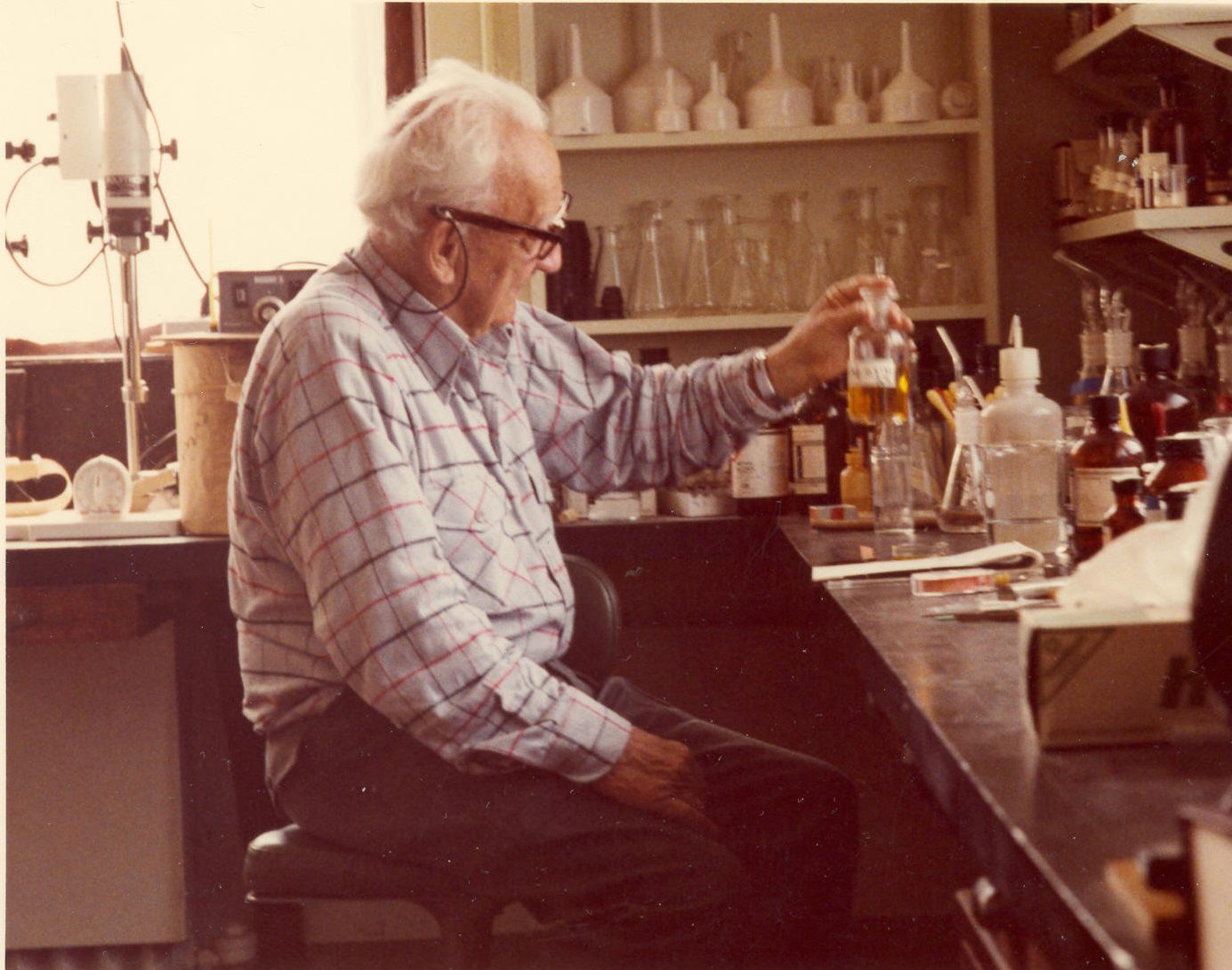 After the war ended, he returned to University of Budapest to establish a laboratory and was elected to the Hungarian parliament. However, his opposition to the communist influence in Budapest led to his emigration to the United States in 1947 where he founded the Institute for Muscle Research at Woods Hole Marine Laboratory in Massachusetts. 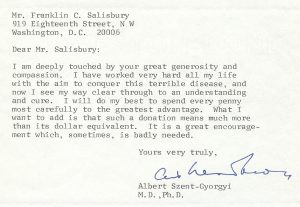 Text of a letter from Dr. Albert Szent-Györgyi to Frank Salisbury, after Salisbury made a donation to Dr. Szent-Györgyis research before they partnered on NFCR.

In the late 1950s, Dr. Szent-Györgyi developed a research interest in the biochemistry of cancer. And after meeting Franklin Salisbury, in 1973, they co-founded the National Foundation for Cancer Research (NFCR). Since then, NFCR has provided more than $340 million in support of cancer research and prevention education programs.

Dr. Szent-Györgyi was a member of many scientific societies in different countries and received many honors, in addition to the Nobel Prize, including the Cameron Prize of Edinburgh University in 1946 and the Lasker Award in 1954.  He wrote ten books, including On Oxidation, Fermentation, Vitamins, Health and Disease (1939), Chemistry of Muscular Contraction (1947), Chemical Physiology of Contraction in Body and Heart Muscle (1953) and Bioenergetics (1957).

Dr. Szent-Györgyi passed away on October 22, 1986 of kidney failure at his home in Massachusetts. Through NFCR, his work continues to help individuals throughout the world. 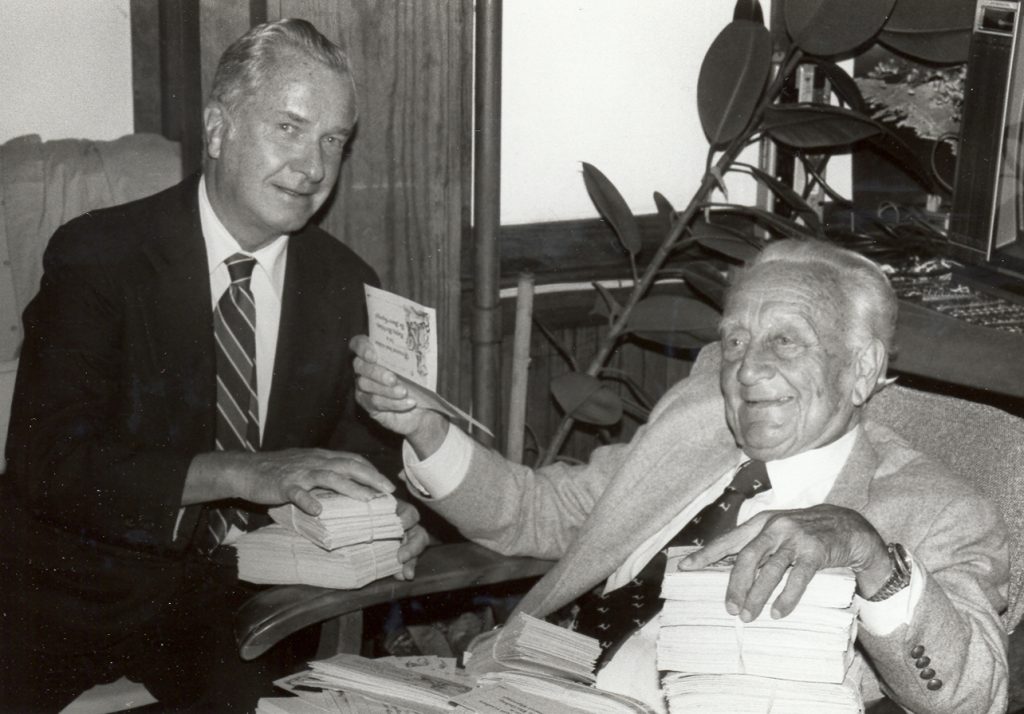 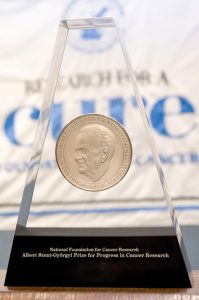 NFCR is committed to upholding Dr. Szent-Györgyi’s vision of curing cancer through innovation and collaboration. As part of this commitment, NFCR has established this prize to honor scientists who have made extraordinary progress in cancer research and to focus attention on the essential role of basic research in finding the still elusive answers to the mysteries of cancer.

The Szent-Györgyi Prize serves to stimulate the quest for continued investment in the pioneering research that will produce scientific breakthroughs and lead to a deeper understanding of the scientific concepts behind the genetics and molecular makeup of cancer. By calling attention annually to achievements in this area, it is our desire to heighten awareness of the kind of research and discovery that must be accomplished
before we can hope to produce cancer cures.

Your ticket for the: The Full Story of Dr. Albert Szent-Györgyi