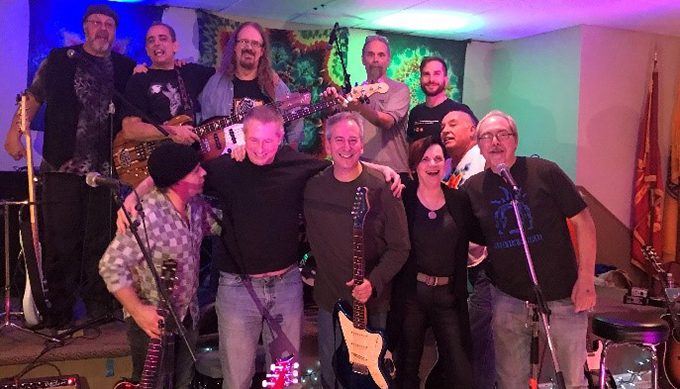 The general manager of a utility company, George Unverzagt too is a guitarist and singer-songwriter with a bluesy, folk Americana band popular throughout much of Pennsylvania, New York and New Jersey. The Acoustic Wolves, comprised of himself and longtime musical partner Jeff Hemmerlin, have a bare, stripped-down style which has endeared them to fans for many years.

A set of deaths in rapid succession triggered a decision by the duo to associate themselves with a cause. George first lost to cancer his father-in-law, to whom he was very close. This was followed shortly thereafter, in January 2018, by the death of three friends—each within one week of the next and all from various cancers. It was a devastating month.

Reeling from the loss and seeking a way to honor his friends and others impacted by the disease, George decided that he would put on a multi-band benefit to raise money for cancer research. Jeff immediately came on board, and they floated the idea among their local music community network. Enthusiastic responses began flooding in, culminating in a day-long April 2018 event.

The band also collects donations in various forms, all of which go to the National Foundation for Cancer Research (NFCR). This includes from a CrowdRise page online, sales of CDs, bills and coins collected in buckets at each of their shows and the spring 2018 benefit concert—and another in November.

“It’s a great feeling to know that we can be a conduit and help in any little way,” says George, speaking of his, Jeff and their musician friends’ contributions. “Many musicians have dedicated their time to raising the money. They have been so generous.”

As to the band’s relationship with NFCR, George notes that when he and Jeff were deciding upon a reputable charity to whom they would direct their fundraising, they agreed that it shouldn’t focus on any one specific cancer. The two men had friends who experienced various forms of the disease, and they wanted to help as many people as possible.

“The National Foundation for Cancer Research made it clear that it was all types of cancer for any person that it supported,” George summarizes.

The Acoustic Wolves and friends are in the midst of planning another NFCR-associated cancer research benefit concert—so the song continues.

Your ticket for the: Playing Tunes, Fighting Tumors