At Play4TheCure, we are grateful to be supported by amazing players, coaches, parents, and communities who work to make a difference in cancer research. We want to thank every team that contributed to Play4TheCure in 2019 and give a special shout-out to our top fundraisers: 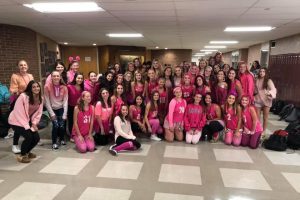 The Joel Barlow Field Hockey Team is not only known for being fierce competitors, but also for being kind people. When preparing for their primary fundraising event, “Pink Night,” they encourage their town’s youth program to take part as well. Players with the youth program are announced with the starting lineup. The team decorates their stadium before the game, expressing both their school spirit and their dedication to raising money for cancer research. 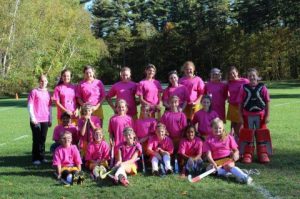 Led by the Athletic Club Sports Booster Club, the Hampstead Middle School Field Hockey team begins their Play4TheCure fundraising efforts as early as the spring before their fall season. Supporting Play4TheCure has become a community-wide effort, with most events taking place in October. On the day of their first fundraising event, there are baked goods and pink items such as sunglasses, scarves, and necklaces for sale. Hampstead Middle School Field Hockey also partners with local businesses that contribute to their raffle items and donate part of their proceeds to Play4TheCure. 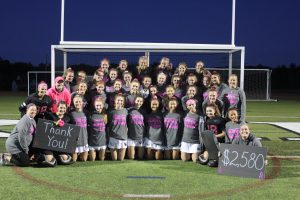 During their sixth year with Play4TheCure, Methacton High School Field Hockey hosted a bake sale and asked for donations during their Play4TheCure game. Combined with their online fundraising campaign, they had a very successful year! 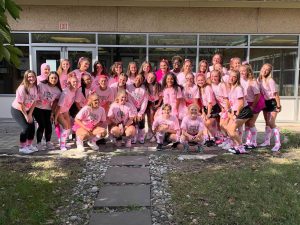 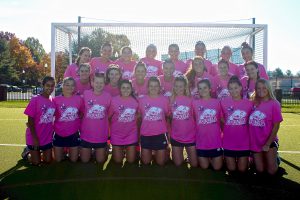 On October 19, 2019, Bucknell University Field Hockey participated in their sixth-annual Play4TheCure game. Since 2014, the team has donated $13,780.75 to cancer research. 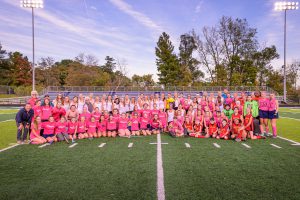 “Each year, we sit down and think ‘Should we do it?’ and the answer is always a resounding yes,” says Chelsea Field Hockey’s Play4TheCure organizer, Sharon Kegerreis. Mobilized initially in 2010 to support their coach who was diagnosed with breast cancer, the Chelsea Field Hockey Team joined Play4TheCure in 2015. Since then, they have raised over $18,000 for cancer research. The field hockey team has hosted a variety of fundraising events, centering around their annual Play4TheCure games. In 2019, players decorated individual pumpkins and displayed them at the games. Spectators could donate and take a pumpkin home. This fun and festive activity raised over $200 for cancer research!

Valley Christian High School Girls’ Soccer began this tradition in 2010 when three players had dads diagnosed with cancer. “This was a  way the girls and I could to show love and compassion to the girls on our team and their families.  Raising awareness to the people in this community, helping those who are in our everyday lives,” Coach Jody Garner expresses. In 2019, the team played 4 Klay Branderhorst, a three-year-old who was recently diagnosed with a grade four brain tumor.

With the help of their school and community, The Gunnery School Field Hockey doubled their donation to cancer research from 2018 to 2019. Their Play4TheCure event consisted of a coed field hockey game, a bake sale with hot chocolate and cotton candy, an online t-shirt sale, and their annual “Beads Beat Cancer” campaign. 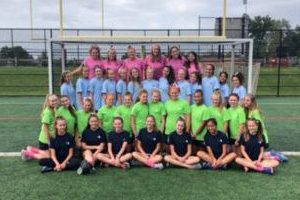 Inspired by teammates and families affected by cancer, the seniors on the Upper Dublin High School Field Hockey team take the lead in fundraising for cancer research every year. Their coach, Heather Boyer, shares, “They easily spend 40 hours fundraising, not including the time spent at practice or games.” Their fundraising techniques include raffles, car washes, t-shirt sales, coin collections at local events, encouraging donors, and working with local businesses.