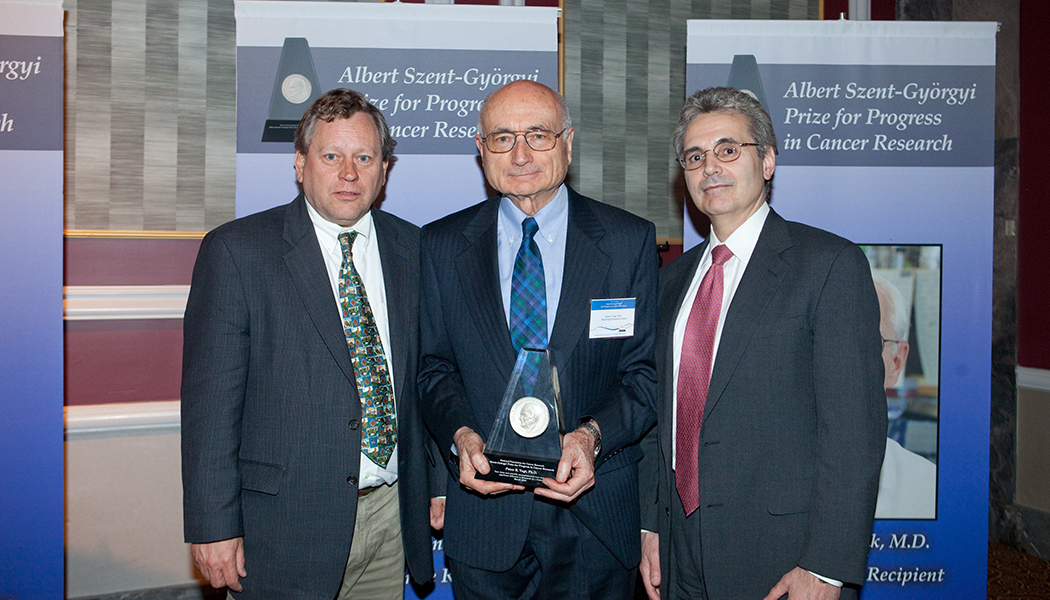 The term “game changer” didn’t come into English usage until 1993, and since then it has been driven into the ground from overuse. But when applied to Peter Vogt, Ph.D., it is more than just hyperbole or overzealous marketing. When you are talking about the person that identified src, the first known oncogene, a gene that can turn an ordinary cell into a tumor cell, thereby revealing that cancer has genetic origins, the superlatives actually mean something.

Ironically, the discovery of src (pronounced “sark”) is a true case of discovering something by accident. When Vogt entered medicine in 1959, cancer research was a somewhat scattered field. The budding sphere of cancer immunology attracted few researchers and produced little results, and while it had been known since World War I that chemicals could cause cancer, most cancers were thought at the time to be viral in origin. Furthermore, Vogt set his sight on viruses, and not cancer directly. But then coincidence kicked in.

“(Many of) the first viruses I worked with happened to be tumor-inducing,” Vogt recollects. “We looked at the genome of these viruses and found that the one that causes tumors has a larger genome than the one that doesn’t. The suggestion then was this extra genetic information that is in the tumor-inducing virus is the specific viral gene that induces cancer. It was possible to determine the origin of these extra sequences, and to everybody’s surprise, the origin was the cell.”

Src had been discovered and the game had changed. Very quickly, Vogt and his colleagues dropped their interest in viruses and turned fully to cancer research. By identifying a genetic connection to cancer, Vogt steered the field into what has become doctrine today: Cancer is a genetic disease and it affects mutations and other changes in oncogenes, as well as the body’s natural tumor suppressors—oncogenes in cancer gaining function and tumor suppressors losing function.

“It made the field much clearer,” says Vogt, “and immediately presented defined goals of what to do and how to develop targeted therapies.”

And it should come as no surprise that Vogt was the recipient of the prestigious Szent-Györgyi Prize for Progress in Cancer Research awarded by the National Foundation for Cancer Research in 2010.

“Dr. Vogt’s fundamental basic science discovery of cancer-causing genes in retroviruses shed the first light on the genetic paradigm that now dominates our understanding of cancer development in humans,” said Ronald DePinho, M.D., chair of the 2010 Prize selection committee. “His groundbreaking work has yielded several of the most important targets in cancer therapy.”

But while Vogt recalls his win with “gratefulness and surprise and tremendous joy,” even going so far as to call the event a milestone, this is not a man to gush (despite having several awards to his name going back to 1976). Rather than accolades, he would much rather speak of his ongoing research.

A Professor at the Scripps Research Institute’s Department of Molecular Medicine and member of several academies, including the National Academies of Arts and Sciences and the American Academy of Microbiology, Vogt now focuses on a kinase family (types of proteins, specifically: types of enzymes), p110, which themselves are encoded by PK3C genes, whose mutations are known to be another major cancer driver. If he pried open one secret, he can pry open another.

As one of the elder statesmen of cancer research, he can see what shifts oncology is going through now that make the job easier. Done, he says, are the days of animal models. Rather, technology has progressed so far that human cells are the templates. And he applauds the close integration between bench work and clinic work.

Says Vogt, “There is a constant exchange of insight and information, and that has also transformed cancer research as a science. It is something that is much more patient-oriented than it used to be.”

And today, at age 86, he shows no signs of slowing down.

“There was a big promise for p110 to be the target of the ultimate cancer drug, and that is a promise that has not been realized,” Vogt stresses, “The search is still going on. But it needs some basic insights to give it more focus and direction. And my work in that field is attempting to generate these basic insights.”

NFCR thanks Dr. Vogt for his Spring 2018 interview

Your ticket for the: Peter Vogt: The Game Changer