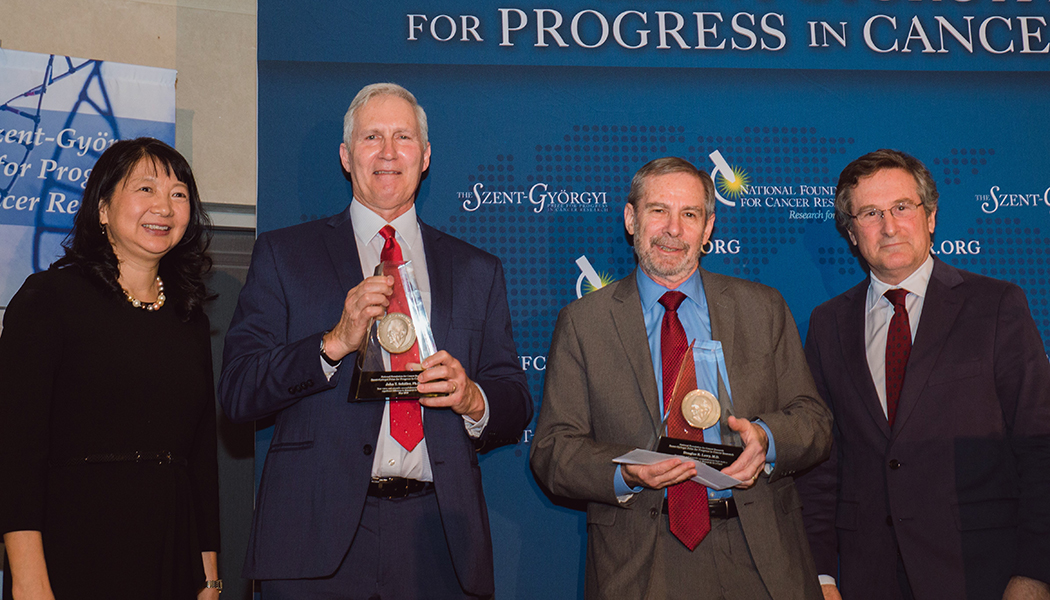 When Douglas R. Lowy, M.D., and John T. Schiller, Ph.D., receive the 2018 Albert Szent-Györgyi Prize for Cancer Research, it will set a precedent for the honor itself. By creating an effective vaccine for the human papillomavirus (HPV), cause of practically all cervical tumors, Lowy and Schiller forged a means to virtually eliminate at least one kind of cancer. And for the first time in the history of the Prize, the award goes not to the discoverer of a particular mechanism of cancer or a new drug target, but to the inventors of a means to prevent tumors altogether.

“HPV is responsible for more than 275,000 deaths per year,” says Lowy. “The vaccine has the potential to drastically reduce that number.”

Worth a Pound (and Dollar) of Cure

It is perhaps ironic that neither Lowy nor Schiller went into oncology with a vaccine particularly in mind. Cancer ran in Lowy’s family and that personal experience set him to cancer research from a clinical standpoint. On the other hand, Schiller is a microbiologist and molecular biologist by training.

“And when I first started, it was just before there was any real inkling that HPV caused cervical cancer,” says Schiller, recalling the early days of his and Lowy’s research in 1983.

It was a lecture by Harald zur Hausen, who first noticed HPV’s role in cervical cancer and would later win the Nobel Prize for his work that rerouted the two.

“I came strictly to study this model system of how to make normal cells into cancer cells by putting a virus into it,” Schiller continues. “And suddenly, I was going from just studying a model system of trying to understand what cancer is, to studying a group of viruses that looked like it was actually going to be a substantial cause of cancer. But we were still studying how they caused cancer. It wasn’t until about 10 years later that we started to work on the vaccine.”

Simply put, the HPV vaccine works by fooling the patient’s immune system into thinking there is an infection so as to make antibodies. The vaccines target the HPV L1 major capsid protein, which can assemble to form virus-like particles morphologically resembling native virions, to generate an immune response strong enough to overwhelm HPV. Interestingly enough, HPV LI is not part of the virus itself, but rather forms the shell surrounding the virus. Nevertheless, it provides the correct immunological response that is able to prevent an HPV infection, and the changes that ultimately lead to cancer from it.

Schiller says that while it is relatively easy enough to describe, the arc of the vaccine, from research to finished product, took 15 years to complete. He is acutely aware of the time span, as his daughter was born around the time he and Lowy began their work!

A Unique and Inspiring Partnership

And as Lowy and Schiller emphasize, and the Szent-Györgyi Committee recognizes, the HPV vaccine is the result of teamwork. Lowy and Schiller exemplify the idea. Their collaboration spans decades. When asked about their syzygy, the two let the superlatives fly.

“My research is far better as a result of working with John than it would have been working without him,” says Lowy.

“Doug and I have had this wonderful collaboration for 30 years,” says Schiller. “It’s relatively unusual that people can continuously work together for that amount of time.”

Both are equally unanimous in their grace winning the Szent-Györgyi Prize.

“It’s incredibly gratifying to receive this kind of recognition from such an outstanding group of peers,” Schiller says. “The people who made this selection are the who’s-who of cancer research.”

Adds Lowy, “I was amazed. I think of the Szent-Györgyi Prize as certainly one of the top prizes in cancer research, but I also think about it being a prize usually either for fundamental discoveries or for cancer treatment, and to highlight an advance in cancer prevention was really something I never expected.”

But both doctors acknowledge that even with such accolades, their work continues—and certainly not always along predictable lines. A bitter paradox is that just because there is a vaccine does not mean people will, or can, take it. In poor countries where HPV-related cancers are rampant, the vaccine is often cost-prohibitive. In rich countries, HPV, like HIV/AIDS, carries a social stigma of being a sexually transmitted disease (STD). Schiller laments that parents can be unwilling to vaccinate their children for an STD (or vaccinate at all), and also notes healthcare provider hesitancy is not helping either. The best thing for doctors to do, he advises, is to discreetly downplay the vaccine.

“Just say that ‘it’s time for your meningococcal, HPV, and DPT; roll up your sleeve’ and they get much better uptake rates,” Schiller says. “Physicians think they have to talk about HPV and point out that it’s sexually-transmitted, but it really isn’t necessary. All you have to say is that it is time to take these vaccines.”

The Szent-Györgyi Prize for Progress in Cancer Research was established in 2006 by the National Foundation for Cancer Research (NFCR) in honor of its co-founder, Albert Szent-Györgyi, M.D., Ph.D., recipient of the 1937 Nobel Prize for Physiology and Medicine. It recognizes and honors scientists who have made seminal discoveries that have resulted in, or led toward significant contributions to, cancer prevention, diagnosis and treatment with a high impact of saving people’s lives.

Colleagues at the U.S. National Cancer Institute’s Laboratory of Cellular Oncology since 1983, Lowy and Schiller have co-authored more than 150 publications related to the molecular biology, immunology, and epidemiology of the papilloma virus. Their accomplishments have been recognized by such other awards beyond the Albert Szent-Györgyi Prize for Progress in Cancer Research as the Albert Sabin Gold Medal Award (2011), the PhRMA Research and Hope Award (2013), the National Medal of Technology and Innovation from President Barack Obama (2014) and the Lasker-DeBakey Clinical Medical Research Award (2017).

The gentlemen will be honored at an award ceremony held Saturday, May 5th, in Washington, D.C.

NFCR thanks Doctors Lowy and Schiller for their Spring 2018 interviews

Your ticket for the: Douglas Lowy & John Schiller: An Ounce of Prevention