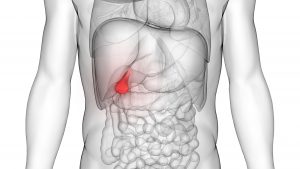 With February being Gallbladder and Bile Duct Cancer Awareness Month, the National Foundation for Cancer Research wishes to profile a recent study focused on the indication.

Like cancers of other organs buried deep within the body, gallbladder cancer is notoriously difficult to diagnosis in its beginning stages; most patients do not even notice anything is wrong until only after their cancer has progressed into late-stage. A recent study out of Germany, however, offers hope for early detection.

Working in collaboration with pathologists at the University of Magdeburg , Dr. Sonja M. Kessler, a research pharmacist in a group led by Professor Alexandra K. Kiemer at Saarland University, has identified a new pathway that may allow improved prognosis and treatment of the disease. Kessler has discovered a protein that is linked with tumor growth and that functions as a prognostic marker, thus providing an indication of how the cancer may progress.

Kessler’s research revolves around a trio of easily identifiable proteins: IMP1, IMP2 and IMP3, which are conspicuously involved with the development of embryos. Under regular circumstances, once a child is born, these proteins then switch themselves off permanently within the child’s genetic make-up and play no further role. In the case of some cancers, however, especially gallbladder, this set of genes switches back on, much to the detriment of the individual.

“Because IMP2 promotes cell division and proliferation, it also drives the growth of tumors,” sums Kessler. “We were able to identify the proteins in a large number of tissue samples from gallbladder [cancer] patients. We were also able to show that the tumor grows faster when the cells contain larger amounts of the IMP2 protein. And in those cases, patient prognosis is poorer.”

Like many other cancers of deep-body organs, the statistics for gallbladder cancer are dim; the five-year survival rate for gallbladder cancer that has spread is 4 percent or less. However, early detection improves those number dramatically — if the cancer is discovered, has the potential to be invasive, but has not spread, (also known as “in situ” or stage 0), the survive rate rises to 80 percent. Detection at this early stage is key, as it is with any cancer. Using IMP2 as a prognostic marker would be a boon to medical science. In 2017, an estimated 4,000 persons were diagnosed with gallbladder cancers, with incidence rates 66 percent higher in women than in men.

By identifying the role of IMP2, the results of Kessler’s research may provide the basis for new effective drug treatments; research can now be undertaken to influence, slow or even completely prevent the harmful processes that are set in motion by the protein.

Kessler’s work can be found in the Oncotarget medical journal.

Your ticket for the: Protein Fueling Gallbladder Cancer Identified