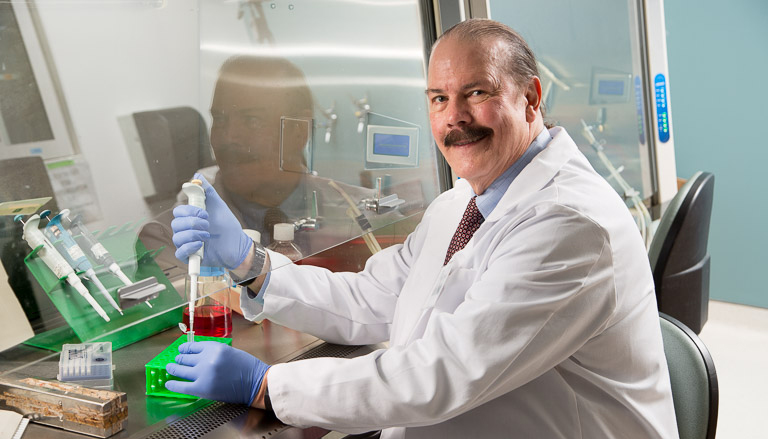 ROCKVILLE, MD – A translational research project supported by the National Foundation for Cancer Research (NFCR) has been awarded $700,000 from Virginia Catalyst to advance its lead cancer drug candidate. The funding will be used for collaboration among the laboratory of Virginia Commonwealth University’s (VCU) Paul B. Fisher, M.Ph., Ph.D., an NFCR fellow, a team at the University of Virginia (UVA) and InterLeukin Combinatorial Therapies (ILCT), a Richmond-based start-up company. The three parties are co-developing unique engineered therapeutic interleukins (a type of protein) which destabilize and can kill cancer cells. The grant was one of six, totaling $3.3 million, recently announced by Virginia Governor Ralph Northram, all in the oncology space.

“As a pediatric neurologist, I recognize that better treatments for cancer start with advancements in life science research,” said Governor Northram.

Virginia Catalyst, formerly known as the Virginia Biosciences Health Research Corporation, was created by the General Assembly in 2013. It is funded by the Commonwealth’s General Fund and seven Virginia public research universities. To date, it has distributed or announced 43 grants totaling $20 million over ten rounds to life sciences companies in the state.

The National Foundation for Cancer Research was the first institution to provide translational cancer research funding for the promising therapeutic intertleukin technology being developed by Dr. Fisher. The segue phase between basic and applied research, translational research is where laboratory findings are validated—and better preventive, therapeutic or diagnostic leads are put onto the path toward human clinical trials and patient use. NFCR’s $400,000 translational research support for the project in 2017 and 2018 is in addition to over $850,000 in basic cancer research funding which the organization has provided to Dr. Fisher and his lab since 2008.

The Virginia Catalyst grant will greatly aid VCU, UVA and ILCT’s joint effort aimed at commercializing and bringing to patients a novel therapeutic targeting metastatic cancers, including glioblastoma, the most common and deadly form of brain cancer. The tumor treatments under development incorporate the mda-7/IL-24 protein which Dr. Fisher discovered and a genetically modified virus which infects only cancer cells that his lab has engineered.

“NFCR has been supporting Dr. Fisher for well over a decade, with more than $1.25 million in total research funding,” stated Sujuan Ba, Ph.D., president and CEO of the National Foundation for Cancer Research. “We couldn’t be happier to be joined by Virginia Catalyst in supporting his and his colleagues’ ‘high-risk’ yet ‘high impact’ cancer research—research that once was only an idea, yet that now forms the basis of potential new and effective tumor drugs.”

“The National Foundation for Cancer Research’s continued support of innovative cancer research helped make possible the underlying scientific breakthroughs driving ILCT’s technologies,” said Dr. Fisher. “IL-24 and the Cancer Terminator Virus have been discovered and/or developed due in large part to the organization’s assistance, and the highly competitive Virginia Catalyst award has been made possible due to such long-standing, unwavering NFCR support.”

The National Foundation for Cancer Research (NFCR) is a 501(c)(3) non-profit organization that provides scientists in the lab the funding they need to make and apply game-changing discoveries in cancer treatments, detection, prevention and, ultimately, a cure. It has distinguished itself in the cancer sector by emphasizing long-term, transformative research often overlooked by other major funding sources. With the help of more than 5.3 million individual donors over the last 46 years, NFCR has delivered more than $380 million in funding to public education and cancer research leading to several important, life-saving discoveries. For more information, visit http://www.nfcr.org.