Dr. Daniel Von Hoff, Director of the NFCR Center for Targeted Cancer Therapies at TGen, has been selected as a 2016 Giants of Cancer Care® by OncLive.  Dr. Von Hoff, Physician-In-Chief and Distinguished Professor at TGen, is a world-renowned physician scientist in cancer research. NFCR has been funding Dr. Von Hoff’s research for over thirty years—in fact, provided Dr. Von Hoff with his very first peer-reviewed grant—and has been supporting his pioneering research ever since. 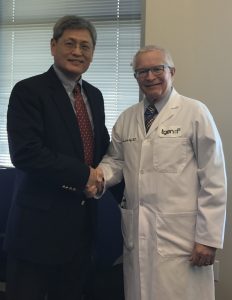 “NFCR congratulates Dr. Von Hoff on this honor; he is truly a ‘Giant of Cancer Care,’” said Franklin Salisbury, Jr., NFCR CEO. “We have supported Dr. Von Hoff’s research efforts since 1985 and know he is an extraordinary man and gifted physician scientist whose research represents the future of medicine in which information gleaned from clinical cares can be used to guide research on new treatment development that target deadly tumors, giving new hope to cancer patients worldwide.”

This is Research for a Cure and Dr. Von Hoff is especially appreciative of NFCR. He has said: “[Early in my career,] my NIH grants kept getting turned down; I did not have any way to generate preliminary information and someone from NFCR walked into my office and said that after careful review I had been selected as a young investigator they wanted to support. I would like to say thank you to all of those who have given because it got me started in quite an adventure to try to make a difference for patients.”

Dr. Von Hoff has devoted his career to translational medicine – the movement of new therapies from the research institution to patient care.  In addition to this recent selection, he was honored with the Scripps Genomic Medicine Award in 2011, named one of the American Society of Clinical Oncology 50 Oncology Luminaries in 2014 and among the first class selected in 2013 by the American Association for Cancer Research for its Fellows of the AACR Academy. 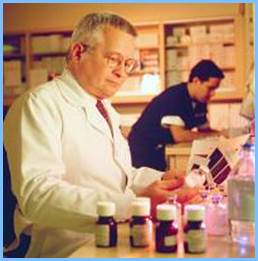 Reflecting on his 30 year journey with NFCR, Dr. Von Hoff said, “Cancer researchers often receive funding from a number of sources, including the federal government, but the most important money we receive for cancer research comes from the National Foundation for Cancer Research. Without NFCR’s support, some of my research would never have gotten off the ground.”

NFCR is proud to have provided $4.67 million for Dr. Dan Von Hoff’s research that directly and indirectly resulted in many clinically high-impact new therapies which have saved hundreds and thousands of people’s lives.

About the Giants of Cancer Care Award
Now in its fourth year, the Giants of Cancer Care recognition program honors those who have devoted their time, talent and resources to improving care for patients and families who are affected by cancer. Their discoveries have propelled the field forward and established the building blocks for future advances. Recipients demonstrate the qualities of unlimited selflessness, compassion for their patients, and a desire to understand and develop life-changing treatments.  In 2016, a Selection Committee of 80+ eminent oncologists will chose 10 honorees from 10 different tumor types and specialty categories.
(Source: https://www.giantsofcancercare.com/about)

At the NFCR Center for Targeted Cancer Therapies at TGen, Co-Directors Dr. Daniel Von Hoff and Dr. Laurence Hurley are pioneering new approaches to attack the so-called “undruggable” targets present in many tumors.

The Center is also embarking on an entirely new approach to developing drugs that block newly-recognized genetic structures called “super enhancers.” This approach may lead to great improvements in the treatment of pancreatic cancer, lymphoma, multiple myeloma, colorectal cancer and other cancers.

About National Foundation for Cancer Research

NFCR was founded in 1973 to support cancer research and public education relating to the prevention, early diagnosis, better treatments and ultimately, a cure for cancer.  NFCR promotes and facilitates collaboration among scientists to accelerate the pace of discovery from bench to bedside.  NFCR is committed to Research for a Cure – cures for all types of cancers.

Your ticket for the: NFCR-Funded Scientist Selected as ‘Giant of Cancer Care’