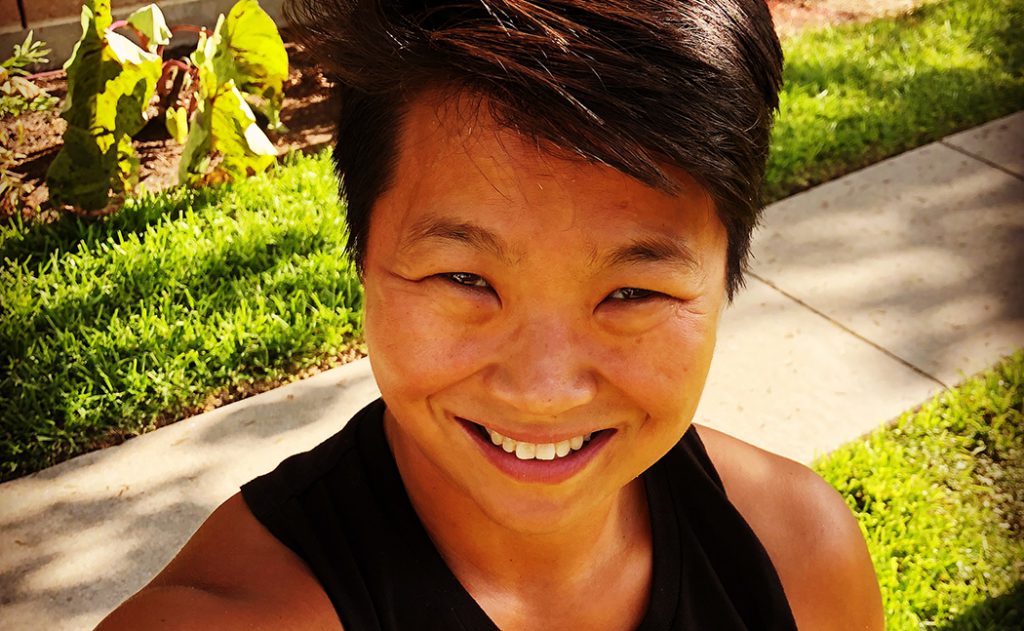 “They say at 40 you’re supposed to get your mammogram. Well, I wouldn’t have exactly rushed to do that if it weren’t for this,” says Tory Campbell, 41.

“I’m a weightlifter, and I had an accident in August 2016 where I broke two fingers on my, dominant, right hand. Within a month, I was having a routine exam when my doctor found a lump in my left breast that was not there the previous year. I was already adjusting to life with using only my left hand, and then to find out I had a lump.”

When her doctor found the growth, Campbell was just about to turn 40 and was living in Connecticut. She had a comfortable job and a lot of friends. She describes herself as a very active and healthy person, with her finger injuries being the biggest health setback she had experienced in her life up until that point.

“I never get sick and I’ve never broken anything before this happened, so as soon as I was adjusting to life temporarily without my right hand, I had to start dealing with cancer stuff. It all happened so fast, but I took the next step, which was a mammogram. Afterwards, my radiologist was concerned that the mass was two centimeters so he recommended a biopsy. I met my surgeon, who would be my surgeon for all of the procedures soon after the biopsy. After the biopsy proved inconclusive, I scheduled a lumpectomy and finally—one month after turning 40—I got the call that the sample she took from lumpectomy was in fact cancerous.

“After that I had more tests done and, because I was adopted, they wanted to test my genetics since I had no recorded biological family medical history. They ran my blood to see if I had any genetic mutations, either common, rare or middle of the road. I had none. So, it was a lot of sequential testing, with the next being an MRI immediately afterward to make sure I was alright on both sides. Turns out, I wasn’t. I ended up having bilateral cancer.

“My left side ended up being worse. It was invasive cancer. On my right side, I had a much smaller mass but in a different area. Further surgeries and tests revealed a non-invasive mass in the right breast with an invasive section in the middle. So, at that point, I already had three surgeries and multiple MRI’s. I then went into radiation treatment from March until May, which wasn’t painful, but made me pretty fatigued. It was a type of fatigue that I had never felt before.

“Initially, my oncologist recommended chemotherapy as a long-term preventative measure, not because of anything that needed to be shrunk, since the masses had been removed. I ended up saying no to my oncologist and turning down the chemo. Instead, I decided to do some research and put this journey into my own hands.

“I’m not one of those people who always thinks everything happens for a reason. I don’t completely disagree, but my cancer was a catalyst for change in my life.”

That change Campbell references was her decision to pack up her life, resign from her comfortable job that provided her with great insurance, leave a network of amazing friends and move to San Diego, California.

“I already do well with living in the moment and not getting too ahead of myself, but it forced me even more to reevaluate questions like, ‘what are you living for? What’s important to you? How do you want to get it?’ And that was the reason I left.

“I chose San Diego because I’ve wanted to live in California since my twenties. I had been to the Bay and Los Angeles areas several times, but I had never been to San Diego until Thanksgiving 2015. The West Coast is vastly different than little Connecticut. I had a very comfortable, easy job. I had roots in Connecticut and I left all of that to pursue something that was unknown. I didn’t want to stay in my comfort zone. That’s what cancer gave me. That’s invaluable.

“I finished radiation in May 2017. You can’t have your first MRI until the one year anniversary of the last one. I haven’t done that yet because I don’t have insurance. I’ll do it when I can, but I don’t want it to mentally affect what I do in the present because I don’t think I could live my life like that.”

When asked about her plans or fears of recurrence, she confidently states, “I don’t have a plan. Eventually when I get insurance, I’ll go through the process again. I know how good I had it and if I got it again, I’m not sure if I would treat it. I don’t want mountains of debt that I’m not sure I’ll ever be able to repay, for something that may or may not treat me.

“I know it sounds morbid. I don’t wish to die. I’m still very healthy and wish to live out my life, but, at the same time, having that first run of it left me unsure if I would treat it again—it depends on a lot of mitigating factors like stage or type [of cancer].”

Not only did Campbell empower herself in terms of treatment and living situation but also with who she allowed to accompany her on her cancer journey.

“I’m Korean and was adopted by white parents from whom I’m now estranged. My father has depression and my mother didn’t cope well with the disease in addition to having her own anger issues. By the end of my thirties, I was totally estranged. When I went through cancer I did not tell them about it. They know now but were not told directly by me. However, I was very open about it through social media. I had friends for support, not my family. I wanted to go through it on my own terms. I actually wrote about our estrangement on my Instagram as a way to voice what I often think about and why I made the decision. I got through it without my immediate family but had friends that treated me like family.

“I think my unconventional story gives others going through it a different vantage point.”

In addition to sharing her story so openly and honestly, Campbell wants to take her positive experience and pay it forward any way that she can. In hopes of helping others in the cancer community, she shares some of the biggest takeaways from her experience.

“As difficult as it is emotionally, view it in a sequence. People hear ‘cancer’ and they immediately panic and assume the worst. Take it in steps. You can’t get ahead of yourself by giving your mind projections like, ‘oh my gosh, where the hell am I going to be in five years?’ It’s a mental discipline of doing your research, going to your appointments, taking your doctors’ advice for what it is and then coming to your own conclusions and decisions. By going to your appointments and doing due diligence, you can come to better conclusions.

“I’m not a doctor by any means, but I did my own research. However, there were times when I’d have to force myself to put my phone down so I wouldn’t tear my hair out thinking about and researching everything I could about cancer because it’s such a vast, complicated disease. I just wanted to know enough so that when I was told the results and what they meant, I wouldn’t be sitting there wondering what they were talking about.

“Also, ask for help when you need it. I know some people hate asking for help, but this is an instance where you must ask for it.

“I know some people would disagree with the word, but in my mind I had it easy because I got through it with minimal pain. I want to pay it forward. I know I don’t have to; I could just go and live my life and be sympathetic. But I feel that I owe it to people who have more hardships or don’t have a supportive family or have a family that doesn’t give them what they need. Or if they’re still scared. Once you’ve gone through it, it’s different. It sounds like this elite social club—it’s not. If you’ve gone through it, it gives you a different perspective. Only someone who has gone through it will understand a little more appropriately because they’ve been there. It’s not a limitation on outsiders’ parts, it’s just different.

“It might sound cliché, but breast cancer gets a lot of attention. A lot of people have loved ones that go through it, but sometimes that’s not enough and sometimes it takes someone subjective, like a stranger, to make an impact. It’s important to not feel alone. With cancer, there are a lot of people who remain anonymous, who choose not to share or feel alone because they don’t have outlets. But it’s not the case. Even for those not apt to ask for help, outlets like social media provide comradery, even if it’s with complete strangers.

“Going through this experience, you reexamine your life and its focus. Those things I would have complained about two months ago, all seem really petty. This revelation wasn’t necessarily on my radar, but neither was cancer. It never is for anyone.”

Tory Campbell is currently living in San Diego and despite not knowing whether she is cancer free, she continues to live a happy, healthy and active lifestyle.

If you would like to engage Tory directly, she has provided the following contact information to answer questions, offer encouragement or just have a friendly conversation:

Please note that although these stories are featured on our blog, any particular advice, claim, insight or opinion offered by the individuals featured in Faces and Voices of Cancer pieces does not necessarily reflect the position of the National Foundation for Cancer Research.

Your ticket for the: Faces and Voices of Cancer—in Depth: Tory Campbell