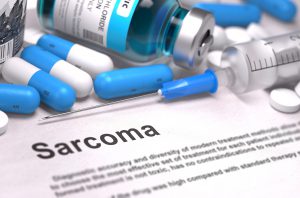 In both mouse and culture-dish experiments, researchers at the Dana-Farber/Boston Children’s Cancer and Blood Disorders Center found that a new line of drugs called CDK inhibitors may herald a new age in treatment for Ewing sarcoma, a cancer in children and adolescents affecting the bones and soft tissue surrounding the bones.

“No one has previously considered CDK12 inhibition as a way to combat Ewing sarcoma,” says Kimberly Stegmaier, M.D., senior author of the new Cancer Cell paper describing the findings.

She refers to one of a series of proteins known as CDK7/12/13, and the discovery came during a mass-screening of the inhibitor compounds against several hundred cancer cell lines. Moreover, Stegmaier and her team found that the inhibition of CDK12, by itself involved with cell regulation, can be bolstered in combination with another cancer drug type known as PARP inhibitors, the result being a lethal one-two punch to Ewing sarcoma cells. (PARP inhibitors are already used with ovarian cancer, another CDK12-related disease.)

The news comes as a windfall to the field of pediatric oncology, long plagued by a lack of new drugs and therapies. For Ewing sarcoma, the standing treatment is chemotherapy, surgery and radiation; when treated with chemotherapy, the five-year survival rate hovers at 70% for children and 56% for teens. For children whose cancer has spread, survival rates fall to 30%. Boys are slightly more affected than girls.

“Pediatric cancers often involve abnormalities in genes that encode for transcription factors, shapeshifting proteins that bind to DNA sequences to activate or repress gene expression,” explains Stegmaier, who co-directs the pediatric hematologic malignancy program at Dana-Farber/Boston Children’s and is a member of the Broad Institute’s Cancer Program. “Due to their disordered physical structure, transcription factors have largely eluded drug discovery efforts.”

Ewing sarcoma arises from an error occurring between two genes. This “abnormal fusion transcription factor” is called EWS/FLI and causes chaos by turning on genes that should be off, while turning off others that should be on. The result is anomalous cell growth and cancer, and EWS/FLI still cannot be directly addressed by medical science. However, CDK12 inhibition (combined with PARP) may offer what researchers sum up as a convenient workaround.

In other words, CDK12 inhibitors slow things down, and PARP inhibitors kill things off. An added bonus is that the combo, in the mouse models, does not result in toxicity in the bones (PARP inhibitors, when used with chemotherapy, create a high amount of bone marrow toxicity in humans). Given these experimental results, Stegmaier is excited about the future potential for testing the combination of CDK12 and PARP inhibitors in human clinical trials.

“PARP inhibition is already FDA-approved for use in certain cancers, and inhibitors of CDK12 and other CDK proteins are in early-phase clinical testing,” Stegmaier says. “If they are proven to be safe in adults, I hope we can extend testing to children with Ewing sarcoma.”

Your ticket for the: Breakthrough in Ewing Sarcoma Research