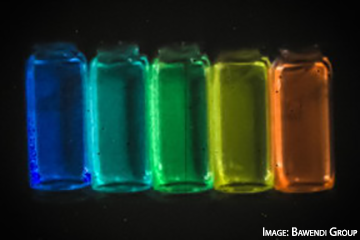 Researchers have found a way to make tiny particles, known as quantum dots, that can be injected into the body and emit short-wave infrared light, enabling a new way to capture detailed images of internal body structures. In this next-generation of in vivo optical imaging, these nano-sized quantum dots that are 7,000 times smaller than the diameter of a piece of hair, can be seen through surrounding skin and muscle tissues. Details of motion, such as the flow of blood, can be captured making it possible for researchers to distinguish between veins and arteries. Internal organs in mice that are awake and moving could also been seen, as opposed to previous methods that required them to be anesthetized.

Although initial applications will be used for preclinical research in animals, researchers are also working on developing versions that could be used in humans. Such imaging could potentially be used to study how the blood flow pattern in a tumor changes as the tumor develops, and may also lead to new ways of monitoring disease progression or responsiveness to a drug treatment.

Your ticket for the: Nano-Particles Open New Window for Biological Imaging