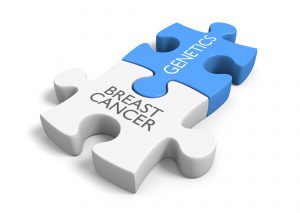 From a genetic standpoint, the human body is something like a symphony, with individual genes often acting as part of a larger sum. In the case of breast cancer, it can be that no one gene is so mutated as to cause the disease. Rather, cancer results more from the combined effect of a series of genes, individual ones of which, each by itself, would be of minimal concern. This idea was long suspected in the medical community, but it was not until last year that scientists had tools to collect and analyze the thousands of genomes needed to quantify it.

“It’s like a landscape full of hills and valleys, with each risky variant like a house on top of it,” said researcher, Dr. Na Li. “If you inherit a high-risk variant — a tall house — but live in a valley, your overall risk of breast cancer may end up being average because your genetic landscape pulls it down.”

While enormous strides have been made in linking a patient’s genes to their risk for breast cancer, about half of those considered under Li’s “high-risk variant” have no known genetic cause for their condition. This suggests a more complicated explanation: That “polygenic risk,” that is, risk conferred by a combination of genetic variants, was involved.

Dr. Li and her colleagues sequenced up to 1,400 candidate breast cancer genes in 6,000 familial breast cancer patients and 6,000 cancer-free controls. In this large sample, they searched for potential cancer-associated genes suggested by the literature, collaborators and their own previous results, and identified at least 46 genes that were at least twice as likely to have mutations among participants with breast cancer than in those without.

“When you know which gene is conferring the risk of breast cancer, you can provide a more precise estimate of risk, know what to expect and watch out for, and tailor risk management strategies to the patient,” said lead researcher, Dr. Ian Campbell.

They also used the data to calculate a polygenic risk score for each patient, and combined this score with data on their high and moderate-risk variants to estimate each patient’s overall risk of developing breast cancer. In the coming years, the researchers plan to expand the study internationally to further test and refine their findings across populations. They also hope to bring these more precise risk estimates into the clinic, to more accurately reassure women about their personal risk of cancer, or — if risk is high — advise preventive strategies such as screening at a younger age.

While this study is important and insightful, one mustn’t—nor do its authors—lose sight of the impact of individual genes. Indeed, the National Foundation for Cancer Research awarded its 2016 Szent-Györgyi Prize for Progress in Cancer Research to the University of Washington’s Mary-Claire King, Ph.D., who discovered the BRCA1 gene—providing the first evidence of genetic predisposition to breast cancer. Her proof of existence of BRCA1 and the identification of its location made genetic screening for breast and ovarian cancers possible.

The research by Li and Campbell identified candidate breast cancer predisposition genes through whole exome sequencing of BRCAx families and equal numbers of cancer free women. King’s discoveries represent a fundamental step in the understanding of cancer and have changed the face of cancer prevention, screening, diagnosis and treatment. Li and Campbell’s work fine tunes this understanding of impact of individual gene’s known to be associated with higher incidences of breast cancer by too accounting for broader “background genetic risk.”

Your ticket for the: “Background Genetic Risk” Studied in Breast Cancer