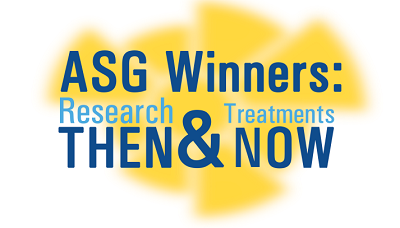 The Szent-Györgyi Prize was established in honor of Nobel laureate Dr. Albert Szent-Györgyi, co-founder of NFCR, to recognize outstanding scientific achievement in the war against cancer. Ten years later, “ASG Winners: Then & Now” looks at these winners, their extraordinary contributions and how their discoveries have made possible new approaches to treating cancer. 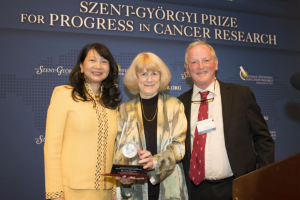 The 2016 annual winner of the Szent-Györgyi Prize was Mary-Claire King, Ph.D., American Cancer Society Research Professor of Genetics and Medicine (Medical Genetics) at the University of Washington in Seattle. In 1990, Dr. King was the first to demonstrate that a single gene on chromosome 17q21 (which she named BRCA1) was responsible for breast and ovarian cancer in many families.

Her discovery of the BRCA1 demonstrated that breast and ovarian cancers have a heredity component and proved that gene mutations could predict vulnerability to the disease. This discovery and the approach she developed to identify this cancer gene has revolutionized the study of cancer genomics and has paved the way to determine if other diseases could also be inherited.

What is a Hereditary Cancer Syndrome?

Inherited genetic defects (called mutations) are passed on from a parent and play a major role in about 5 to 10% of all cancers. The approach that Dr. King developed to identify BRCA1 has since linked other mutations in specific genes with more than 50 heredity cancer syndromes or disorders that may predispose individuals to developing certain cancers.

In the 1970’s, very little was known about the causes of cancer. The idea that cancer was fundamentally a genetic disease was not widely accepted. However, early-onset breast and ovarian cancers seemed to disproportionately affect certain families. With a background in genetics and a personal connection to cancer (Dr. King lost her best childhood friend to cancer), Dr. King began a mission to determine if breast cancer could be inherited genetically and if a specific gene mutation could be the culprit.

Over the next 17 years, from 1974-1990, Dr. King worked with human geneticists from around the world- each of whom had their own individual phenotypes of interest—to identify markers in all chromosomes that could be used to trace chromosomal segments, while at the same time studying 1,579 women, trying to prove that some breast cancer cases could be traced to a single gene. Finally, a new technology breakthrough in the early 1980s made it possible to search for pieces of DNA from blood samples enabling Dr. King to narrow the possibilities to a gene located on chromosome 17q21 which she named BRCA1.

The winner of the 2015 Szent-Györgyi Prize and 2016 ASG Prize Selection Committee Chairman, Dr. Frederick Alt, Director of Program in Cellular and Molecular Medicine at Boston Children’s Hospital, said, “Dr. King is the true pioneer and world leader in the research that clearly demonstrated the genetic causes of breast and ovarian cancers by identifying the BRCA1 gene and its cancer-related mutations. Her work has opened a new field that allows scientists to investigate and understand breast and ovarian cancers and other types of genetic diseases with a much more effective approach.”

Dr. King’s discoveries represent a fundamental step in the understanding of cancer and have changed the face of cancer prevention, screening, diagnosis and treatment. Subsequent studies have shown that the risks of breast and ovarian cancer among women with BRCA1 mutations are very high, up to a lifetime risk of 80% for breast cancer and greater than 40% lifetime risk for ovarian cancer. These results were first met with skepticism as was her discovery of BRCA1, but are now widely accepted in oncology practice today.

Today, we also now know that the BRCA genes are linked to increased risk of developing for fallopian tube cancer, peritoneal cancer, male breast cancer, prostate cancer and pancreatic cancer. Because of Dr. King’s early work, people with BRCA gene mutations can be identified, monitored and counseled to better understand and manage their cancer risk.
“There is no reason now that any woman with BRCA1 or BRCA2 should ever die of breast or ovarian cancer.”
– Dr. Mary-Claire King

Dr. King and her colleagues have recently developed multi-gene capture and parallel sequencing tools to detect all the mutated genes that have been discovered that predispose women to breast and/or ovarian cancer. This screening platform, called BROCA, is now widely used in clinics.
Her current research focuses on identifying and characterizing critical genes – and their interaction with environmental influences – that play a role in the development of conditions such as breast and ovarian cancer, schizophrenia, and hearing loss.

Your ticket for the: The Pioneering Gene Work of Dr. Mary-Claire King