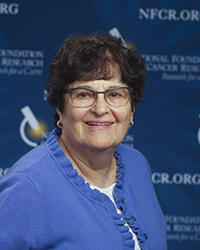 Dr. Horwitz is an American biochemist and distinguished professor emerita at the Albert Einstein College of Medicine.

Dr. Horwitz grew up in Boston, went to Bryn Mawr College and received her Ph.D. in Biochemistry from Brandeis University. Dr. Horwitz worked as a postdoctoral fellow at Tufts University’s Medical School and at Emory University’s School of Medicine. In 1967, she began work at the Albert Einstein College of Medicine.

Dr. Horwitz’s key interest is finding cancer treatments using natural products as a source for new drugs. Horwitz is a pioneer in dissecting the mechanisms of action of chemotherapeutic drugs including camptothecin, epipodophyllotoxins, and bleomycin, and taxol. Horwitz’s work on taxol in particular has brought her international recognition. Horwitz discovered that taxol binds to microtubules, resulting in arrest of the cell cycle in metaphase. Her work paved the way to using taxol and other microtubule binding agents as chemotherapeutics. Taxol remains widely used today, as a means to treat ovarian, breast, and lung cancer. However, since taxol is in short supply, Horwitz has directed studies in her lab to identify similar therapies in natural products.

Over the course of her career, Dr. Horwitz’s work has been published over 250 times, and she has been awarded the C. Chester Stock Award from Memorial Sloan Kettering Cancer Center, the Warren Alpert Foundation Prize from Harvard Medical School, the Bristol-Myers Squibb Award for Distinguished Achievement in Cancer Research, the American Cancer Society’s Medal of Honor and the AACR Award for Lifetime Achievement in Cancer Research.

Your ticket for the: Susan Band Horwitz, Ph.D.