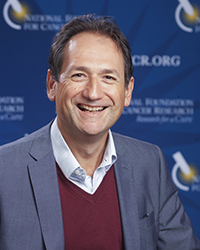 Professor Ruggero De Maria obtained his M.D. at the University of Catania (1989) and completed his residence training in endocrinology at the University of Palermo (1994). During his postdoc at the Department of Experimental Medicine, University of Rome, Professor De Maria produced several key contributions to the understanding of cell death signaling in normal and cancer cells with the intent to define the mechanisms responsible for cell depletion or accumulation. Then in 1998 he established his research group and identified the differential impact of T helper cytokines on cells targeted by the immune response or chemotherapy. During these years, he started a strong collaboration with the Department of Hematology, Oncology and Molecular Medicine at the Italian National Institute of Health (NIH), becoming Research Director in 2000 and Chairman in 2008. At the Italian NIH, he began to study stem cell differentiation and the homeostatic regulation of hematopoiesis. He demonstrated the existence of a key physiological and pathological mechanisms of erythropoiesis regulation by caspase-mediated cleavage of erythroid transcription factors. Moreover, he discovered that chemotherapy-induced anemia is due to the selective destruction of early erythroblasts, while chemotherapy-induced thrombocytopenia from destruction of megakaryocytic progenitors. The most groundbreaking discovery of Professor De Maria concerns the identification of cancer stem cells in colorectal and lung cancers, which have revolutionized both our conceptual understanding of cancer biology and the possibility to develop effective therapeutics.

At the end of 2011, he became Director of the Regina Elena National Cancer Institute in Rome, one of the major comprehensive cancer centers in Italy. This allowed Ruggero to devote all of his research activities toward translational cancer research. Since 2013, Professor De Maria has served as the President of Alliance Against Cancer, the Italian network of comprehensive cancer centers. Under his supervision, the network is actively working to launch several precision medicine programs across Italy with a singular goal of bringing the most impactful innovations into the clinical practice. Moreover, since 2016 Professor De Maria has been the Director of the Institute of General Pathology at the Catholic University of Rome and President of the Italian Institute for Genomic Medicine in Turin, Italy.

Your ticket for the: Ruggero De Maria, M.D.