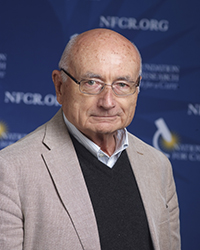 Dr. Peter Vogt is a molecular biologist, virologist and geneticist. His research focuses on retroviruses and viral and cellular oncogenes.

Dr. Vogt defined related groups of viral surface proteins and their corresponding receptors on the cell surface. Together with his associate Kumao Toyoshima, he isolated the first temperature sensitive mutants of a retrovirus and in collaboration with the biochemist Peter Duesberg discovered the first retroviral oncogene, src. His work on mutants of the Rous sarcoma virus enabled Michael Bishop and Harold Varmus to isolate DNA sequences that represent the src oncogene and to demonstrate the cellular origin of oncogenes. In his extensive studies on avian retroviruses, Vogt discovered oncogenes that play important roles in human cancers, e.g. myc (in collaboration with Bister and Duesberg), jun (with Maki and Bos) and p3k (with Chang).

Your ticket for the: Peter K. Vogt, Ph.D.