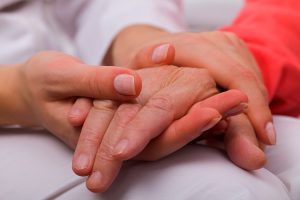 At just 28 years old, Danielle Homrich’s life changed with the news of her spouse’s cancer diagnosis. During the one year and one day that her husband, Brandon, endured treatment, Danielle went from being a young wife and mother to a full-time caretaker of a cancer patient. Now, she’s eager to help other caretakers learn from her experience.

Q: Danielle, looking back, what advice do you wish someone would have given you?

It’s important to be optimistic for the other person. Brandon was positive, but a lot of patients are not. It’s very, very important to remind them to have hope—especially when they start to run out of it.

Halfway through the treatment, Brandon said, “It feels like one of those commercials where you’re standing still and everyone else is moving a million miles an hour around you. And I’m just there.”

I think it helped Brandon because if I would have been crazy and freaking out and crying every day wondering what I was going to do, that would have just added so much more stress to him. He was the one going through it—the hospital trips, the treatments and feeling like crap. He was the one who had cancer.

So, amongst the craziness of everything that’s going on during treatment, it’s very important to remain as calm and as positive as you can. To have that positive reinforcement is super important.

Q: How did you care for yourself while you were caring for Brandon?

It’s important to lean on other friends and family for the caregiver to get support. Brandon was always the one who was my rock. So, what do you do when your rock needs you to be their rock? You have to lean on other people for that. My mom was a huge help because she was at our house and helping a lot. Sometimes I would talk to Brandon and be positive, and then walk out of the bedroom, close the door and go cry to her about it.

You don’t have to have a huge support system. I really just had my mom and a couple of friends that lived close by. Emotionally, it’s good to have friends and family that live close by. But if you don’t have that, maybe talk to people at work or church. If they’re close enough to you that they know what you’re going through, it’s safe to reach out to them. They probably want to help in some way.

Q: What recommendation would you give to caregivers about asking for help?

In that situation, it’s okay to be specific about what you need. When someone gets diagnosed, that’s the first thing friends and family will say: “Let me know what you need.” They’re not just saying that. They really mean it. So, it’s alright to say, “Hey, can you go grocery shopping for me?” or “Hey, can you help me clean the house to prepare for him to come home after chemo?”

When Brandon came home, the house had to be cleaned in a very specific way, so it was OK to tell them exactly what needed to be cleaned. It’s okay to feel like you’re being a bit nitpicky about it. No one is going to care or think you’re being overdramatic.

There is no right or wrong way to ask for help. It’s always hard to ask for what you need, and it’s always going to be uncomfortable. You just ask, and the people who really love you and support you in any way do that: Help.

Q: As a mom, how did you handle talking to your kids about their dad having cancer?

It’s important that they know very early what’s going on. Don’t lie to them or try to hide anything. Explain it in an age-appropriate way so they understand what’s going on; so that they’re not scared.

I remember when my five-year-old, Knox, asked, “What happens if Daddy doesn’t get better?” And I replied, “Then he will go to heaven”. Knox stared at me in shock, and I said not to worry because I’ll still be here, and Daddy will take care of us.

Then I remember a week or two later, we were driving somewhere in the car, and he said, “Mommy, if Daddy’s cancer doesn’t go away, then we’ll just have a Mommy and it will just be the three of us.”

He was just making a comment, like the sky is blue. And I said, “You’re right, it will just be the three of us.” And that was the end of the conversation. He understood as well as he could at that age.

I think the positivity from me was really helpful to our two kids, too, so they didn’t feel nervous, no matter what the outcome.

Q: How did the positivity help Brandon?

I think it took a lot of stress off of him. If I would have been freaking out, he would have worried about me and himself, instead of just being able to focus on getting better.

Their number one job is just to focus on getting better.

I think it’s important to keep life going how it was before the diagnosis. So, instead of sitting and talking about it, we still had fun. We went out to the park, played games, saw a movie and went out to dinner. We tried to keep life as normal as possible when he was feeling good and feeling up to it.

Go do stuff. Have fun. Don’t sit in the house and think about it all the time.

That’s the most important job of a caretaker—to help the cancer patient continue to feel normal and remember what there is to value about life. During chemo, they spend a week in the hospital and then a week home feeling like crap.

He said, “I’m so thankful for these weeks when I feel good, but then it sucks because the whole week that I feel good, I keep thinking how I have to go back to the hospital.” The more we did to keep his mind focused on fun things helped him endure the treatment because he wasn’t just thinking about the bad stuff.

There were tough times too, though, and it’s important to let the person who is going through the treatment take the lead. At the same time, there were days he would have sat inside and watched TV all day if I wouldn’t have encouraged him to do something.

Do your best to recognize when they’re really not feeling good and don’t push. But when they’re feeling good enough, incentivize them with baby steps—like just going outside versus sitting inside; going for a short walk.

Q: What if the cancer patient is deteriorating and preparing for end of life?

As important as it is to remain optimistic, it’s also very important to remind yourself of the realistic expectations.

I remember when Brandon started deteriorating faster. There were nights when he didn’t sleep very much, and we were in separate beds, so I wouldn’t disturb him. I would wake up in the middle of the night to check on him. If I saw him on his hands and knees to take the pressure off of his face from the tumor, at least I knew he was alive. But, when I would wake up to find him sleeping normally on his back, I would freak out because I thought he was dead. I would have to walk closer to make sure he was breathing.

One morning, I found him lying normally and breathing, but it was very shallow breathing. It took me awhile to see him breathe, so I freaked out. I finally saw him take a huge breath, and I knew he was fine. I came downstairs and called my friend April. I told her how terrified I was that I would wake up to a dead body in the bed.

But, when he would wake up and be in pain, I just stuck to the positive and told him he’d be OK, and I’d ask him if he wanted me to call the doctor.

When Brandon’s cancer progressed to the point where he was in the ICU, his pain was too much. He had a tracheotomy and couldn’t speak, so he grabbed the collar of my shirt and wrote on a whiteboard, “I know I’m going to die. I need something to help me.” I asked him if he wanted the doctors to sedate him. His eyes grew large, and he nodded ‘yes’. He knew what was happening, but I knew it was very important to him that I remained calm and positive no matter what.

The last thing I said to him was, “We have to sedate you so that the medicine can work and your body can rest.” The last thing I told him was that I love you and I’ll see you soon.

I knew that he wasn’t going to wake up from that, but I didn’t need to tell him that. At that moment, if I would have said, “You’re going to go to heaven now” he would have been completely freaked out, even though I know he knew he was going to die.

Q: Is there anything else you want readers to know?

So, I am going to live twice as big because of him. I choose to be happy.

I have my bad days. You’re always going to have your bad days and your tough moments, and you can’t expect that they’re going to go away. They won’t. Years later, you’ll probably still have your days. Sometimes, it’s fine to sit home and cry all day.

But it’s also okay to move on with life. It’s okay to be happy.

NFCR thanks Ms. Homrich for her Spring 2018 interview