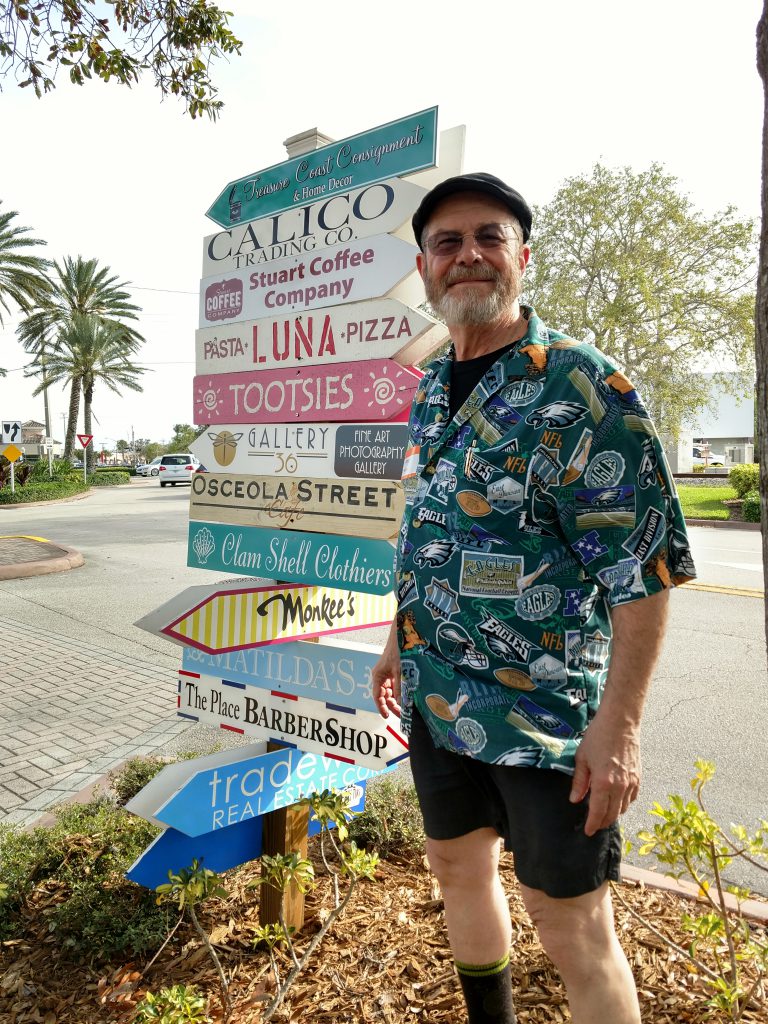 “I think it was 2006,” recalls Michael “Mickey” Stein on his chronic follicular indolent non-Hodgkin lymphoma.

“I was referred to the head of surgery at Hahnemann Hospital. He told me that they needed to do a complete biopsy. They removed the inguinal node in my right groin area. It turned out to test positive for non-Hodgkin lymphoma. It’s the type of lymphoma that can stay dormant for years but pop its ugly head up at any time. However, it’s very treatable. I had numerous CAT scans and MRIs over the years, so I wasn’t too worried. My bone marrow also tested positive for lymphoma, but it was a very low level, not yet requiring treatment.”

However, lymphoma was only a portion of Stein’s experience with cancer.

“I had prostatitis in my forties, but medication took care of it. As I got older, doctors monitored my prostate-specific antigen (PSA) more closely. In 2014, my doctor sent me to a urology specialist who thought my prostate should come out. I said something along the lines of, ‘You just met me and you wanna take my prostate out?’ So at this point I knew I needed a second opinion.

“I went to my good friend, surgical oncologist Dr. Janet McDermott, who was at Robert Wood Johnson at the time. She recommended I go to MD Anderson in Camden, New Jersey.

“They explained that although they didn’t want to jump to conclusions right away, they thought I was a good candidate for a biopsy. They gave me a test right before the biopsy called a 4K, which is a brand-new test that takes numerous factors besides PSA and does computerized extrapolations. It tests urine and a small amount of blood, then from that they take PSA and other blood measurements, and afterwards feed your history into a computer. Mine included the lymphoma, the fact that my father had prostate issues, etc. It calculates a number, mine being 85% prostate cancer, which is when I decided to go for the biopsy

“One thing I want to reassure people is that prostate biopsies truly are painless. They give you the ‘twilight medication’ in an IV.  When you wake up, you ask when they are going to start, then realize it’s already over.

“I believe it was February of 2018 when I had my first biopsy where they took samples from 12 points of my prostate gland. Three days later, my surgeon called me and said they didn’t find anything and that the test ended up inconclusive.

“Five months later I had another biopsy, but for that one that I would be awake throughout the procedure. The reason for keeping me awake was for me to potentially move my body around to reach totally different sets of points to biopsy. They assured me I wouldn’t feel a thing, but they were going to do more than 12 points. Now, if you talk to anyone who’s had prostate cancer and biopsies, they’ll tell you they only take 12 points. For me this time, they took 17 to get areas not typically biopsied.

“There was no pain at all, just a little discomfort when they had me move in various positions to access atypical areas of my prostate gland. Three or four days later, I got the call, ‘Mr. Stein, we need you to come into the office.’ I knew what that meant—they found it.

“The good thing was that they found it in a very remote follicle of my prostate gland, which means I only needed surgery. They decided they’d take out 31 lymph nodes and my prostate. Thirty nodes were directly related to my prostate but the node in my small intestinal area was to assess any change in my lymphoma. I was told these decisions were made at their tumor board meeting. It gave me a great sense of reassurance knowing I had a team behind me.

“I was only in the hospital for the day of the surgery. About two days later, they called and said they got everything, so no chemo, no radiation. It was completely contained within the prostate and was borderline Stage II-III prostate cancer. It was in the final 17th follicle that they biopsied. The small intestinal node too was biopsied, but they didn’t find anything credible for treatment. They found the molecular parts of non-Hodgkin, but it wasn’t urgent because my immune system was doing the work it was supposed to be doing all these years.”

Stein attributes his good fortune to his health and holistic lifestyle.

“If you have cancer, take care of your body. You need to give yourself a fighting chance. Don’t smoke; don’t drink excessively; listen to your doctor. And be happy! I’m going to be 73 years old and people think I’m in my 50s. Healthy lifestyle and medicine go hand in hand.”

He goes on to explain that despite him and his family’s healthy, active lifestyles, he wasn’t the only Stein confronted with the disease. Cancer first reared its ugly head in Stein’s life in 1976, when he lost his mother to breast cancer—long before the extensive research and technology that exists today. Fast-forward to 2012, and Stein’s sister, Bobbi, found out she had cervical and uterine cancer. After the removal of her uterus, her doctors recommended chemotherapy just to be sure they got everything. However, after about five or six rounds of it, she decided she had had enough. Months later, without saying anything to her children, they noticed something was off and took her back. To the family’s dismay, they had discovered she had endometrial cancer with only weeks to live.

Stein vividly recalls the day of his sister’s passing.

“Hospice nurses recommended the family go have food and a break, as in their terminology she was ‘traveling.’ They thought it would be a matter of hours. I decided to stay. It was just us and the nurses. I held her head and she seemed very much at peace. I said, ‘It’s okay Bobbi. If you feel you have to go, you don’t have to struggle and hold on for me. Just come back and visit when you can.’ And that was it. She left this world at peace and with a sigh.

“She never complained, and went with a smile and a sigh. I knew everything was going to be okay when Bobbi opted to have palliative and hospice care in her home. Also, when she opted to go without heavy doses of morphine. I held her, and it gave me such a strong connection to God. Part of me felt like I went through the veil with her, but she let me come back.”

Toward the end of his powerful story, Stein shares some pieces of advice for those confronted with cancer.

“I think it’s so important that you not only have a good surgeon, but that you trust them and have rapport with them, which is what I have with Dr. Jeffrey Tomaszewski at MD Anderson. He oozes confidence and that made me feel positive the whole way.

“When you have a good feeling going into something that is obviously life changing and you feel positive about it because of a team that is so confident and caring, it increases your chances of making it and coming out better from it. If you’re not feeling that chemistry with the person that’s going to be handling your care, you need to get out and find someone that you do have it with. You need to feel good and positive because if you don’t, you’re changing the odds.

Along with advice, Stein wants to conclude his story by thanking those who were key players during his cancer journey.

“My friend Dr. Janet McDermott. We were very close for a while. Even though our life passages took us in different directions, she has always been a part of my life. We’ve always been very supportive of each other. She’s always been an emotional support to me. She even came down to visit me after surgery. She is currently located at Saint Barnabas Medical Center, specializing in breast cancer and where she is chief of the faculty practice.

“My big sister Sheila Stein Bruner. She’s been my rock. Any time I’ve needed to travel for appointments or biopsies, she’s been there. She recently lost her husband to cancer, who was a survivor of Auschwitz and made it to 84 or 85 years old. Sheila’s been through a lot, but she has always been there for me despite everything.

“My children: My son Mark Stein and my daughter Teresa Stein Dompert have always supported me.

“My daughter is another rock. Daddy’s little girl—daddy’s 50-year-old girl. We talk almost every day even though she lives out in Indiana.”

Although the follicular indolent non-Hodgkin lymphoma is a part of Stein’s life, it doesn’t come close to holding him back from living his life to its fullest. He’s retired from social work but is still an active board member of his local county commission on mental health and addiction and his synagogue. He works four days a week, managing a grocery store at night and substitute teaching every once and a while. He too tries to run ten to twelve miles a week on the trails in the local state park.

In addition to contributing directly to his community, Stein advocates health and cancer prevention in the Twitter community too. He shares that various friends of his have prostate cancer, some who have gone without successful surgeries.

Recollecting, he shares, “I thought, ‘ya know, maybe I could do something about this? Maybe I can use this platform to help assuage fears about cancer’.” And sure enough, that mindset is what brought him to connecting with the National Foundation for Cancer Research.

If you would like to engage Mickey directly, he has provided the following contact information to answer questions, offer encouragement or just have a friendly conversation:

Your ticket for the: Faces & Voices of Cancer—in Depth: Michael Stein