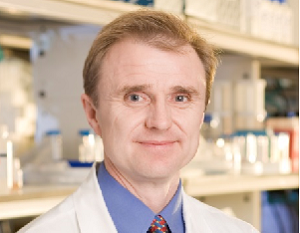 T-cells are part of the body’s immune system that is responsible for identifying, attacking and destroying diseased cells. However, cancer cells can hide. And in order for T-cells to get rid of cancer, they first have to “see” the cancer. Dr. Cooper and his team of researchers  found a way to modify the T-cells collected from a leukemia or lymphoma patient and enable them to “see” the tumor cells.

The research team employed a genetic engineering technique that makes the T-cells carry a “cellular antenna” (chimeric antigen receptor or CAR), which specifically detects a molecule called CD19 that is found on the tumor cell surface of several types of leukemia and lymphoma (including Acute Lymphoblastic Leukemia, Chronic Lymphocytic Leukemia and Lymphomas of the B-lineage). When the CAR-T cells are fully-equipped and infused back to the same patient, they can mount full-blown immune attacks on tumor cells.

Moving research to patient care, Dr. Cooper’s team recently published their laboratory results from a high throughput device that rapidly makes large numbers of CAR-T cells. Although it is still early in its development, Dr. Cooper predicts the innovative device will provide a faster and safer method for redirecting immune cells. Early in 2015, a new company, ZIOPHARM Oncology, was launched to translate Dr. Cooper’s adoptive immunotherapy approach into new treatments for patients in clinics across the U.S.

Laurence J.N. Cooper, M.D, Ph.D., is a visiting scientist at the University of Texas M.D. Anderson Cancer Center and CEO of ZIOPHARM Oncology. He graduated from Kenyon College in 1986 and received his M.D. and Ph.D. from Case Western Reserve University. He then completed his medical residency at the University of Washington Children’s Hospital and Regional Medical Center. Dr. Cooper finished his schooling with a fellowship at Fred Hutchinson Cancer Research Center.

Dr. Cooper joined the University of Texas MD Anderson Cancer Center in 2006, where his appointments included Tenured Professor in pediatrics and immunology, Section Chief of cell therapy at the Children’s Cancer Hospital and Associate Director at the Center for Cancer Immunology Research.