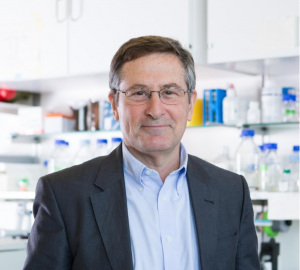 ROCKVILLE, MD – Michael N. Hall, Ph.D., the National Foundation for Cancer Research’s (NFCR) 2017 Szent-Györgyi Prize for Progress in Cancer Research winner, and David Sabatini, M.D., Ph.D., were named winners of the 2020 Sjöberg Prize “for their discovery of the target of rapamycin and the mammalian target of rapamycin, and their roles in the control of cell metabolism and growth.”

Awarded annually since 2017 by the Swedish Academy of Sciences, the same esteemed organization which selects Nobel Prize laureates in chemistry and physics, the Sjöberg Prize honors achievement in cancer research and includes one million U.S. dollars to be shared among recipients.

Rapamycin is a compound isolated in 1972 that was soon thereafter known to demonstrate anti-fungal properties. But its mechanism of action remained a mystery until Dr. Hall, of the University of Basel, discovered the first “target of rapamycin” (TOR) genes in yeast. Dr. Sabatini, now at the Massachusetts Institute of Technology, discovered the mammalian counterpart, mTOR. These discoveries and follow-on breakthroughs have radically changed ideas about cell growth, an important factor in the development of tumors, and laid the foundation for new forms of cancer treatment.

Doctor Hall becomes the third winner of the Szent-Györgyi Prize, one of the most prestigious awards in cancer research, to subsequently be selected for the Sjöberg Prize. James Allison, Ph.D., 2014 Szent-Gÿorgyi Prize recipient for his pioneering cancer research in the area of immunotherapy, won the 2017 Sjöberg Prize and then the 2018 Nobel Prize in Physiology or Medicine. Zhu Chen, M.D., Ph.D., 2012 Szent-Györgyi Prize recipient for his new therapeutic approach to leukemia, won the 2018 Sjöberg Prize.

“We are so happy to see Dr. Hall receiving the Sjöberg Prize,” stated NFCR President and CEO Sujuan Ba, Ph.D. “This recognition from an esteemed institution speaks volumes about his contributions to cancer research.”

“We are especially proud of the fact that three Szent-Györgyi Prize recipients have thereafter received the Sjöberg Prize, one of whom also earning the Nobel Prize,” also said Dr. Ba. “This demonstrates the foresight of the Szent-Györgyi Prize Selection Committee of the National Foundation for Cancer Research.”

The National Foundation for Cancer Research (NFCR) is a 501(c)(3) non-profit organization that provides scientists in the lab the funding they need to make and apply game-changing discoveries in cancer treatments, detection, prevention and, ultimately, a cure. NFCR has distinguished itself by emphasizing long-term, transformative research often overlooked by other major funding sources. Since its establishment in 1973, NFCR has provided more than $380 million for cancer research and public education.

Your ticket for the: Michael Hall Named 2020 Sjöberg Prize Recipient