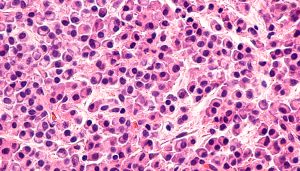 Multiple myeloma (MM) is a bone marrow cancer that affects plasma cells. Bone marrow is the soft and spongy tissue which resides in the cavities of many of our bones. It is rich in cells which produce new blood cells. On average, 500 billion new blood cells are produced each day within the bone marrow. These cells can be categorized as either lymphoid (producing lymph cells) or myeloid (producing red blood cells, white blood cells (including plasma cells) and plasma). Normally, plasma cells work as part of the immune system to produce antibodies which can recognize and neutralize pathogens; but in MM, these cells become cancerous and grow out of control, leading to multiple painful bone tumors, as well as anemia, kidney failure and recurrent infections. MM relapse rates are quite high because of the inherent challenge of immunosuppression, given that the immune system itself is directly compromised. As a result, immunology has been a major focus of new treatment methods.

Standard treatments for MM include chemotherapy, radiation and stem cell transplants. With this being said, there has been an explosion of treatments for MM within the last 5 years. These include immunomodulatory agents, proteasome inhibitors, CAR T-cell therapy, steroids, alkylators and antibodies. Although very exciting and hopeful, this plethora of newly approved treatments has presented a new problem: what should be used and for whom, when should it be used and with what combination should it be used? The relevance of these questions is extremely pertinent in MM because there is a wide variety of person to person variability leading to significant variations in treatment effectiveness and cost (health and financial). This newly presented problem has ramped up research efforts in predictive computational mapping, which aims to predict treatment outcome based on various biomarkers.

Professionals are now able to effectively predict how each patient will respond to different treatment methods for MM. This ground-breaking discovery is capable of changing the face of MM intervention by increasing patient outcomes and improving the understanding of the mechanisms behind treatment failure. This predictive computational mapping is achieved through genomic database information calculations. These calculations can look at the various drug interactions and their impact on the cell signaling and metabolism of many different MM phenotypes. The phenotypes of patient’s tumors are determined through tumor biopsies. This information is then entered into the computational modelling system where a variety of drug interactions and doses can be tested to see what specific modulating chemicals will most effectively target the specific form of MM which is present.

MM is still considered an incurable disease.  As a result, scientists and medical professionals are quite open to holistic intervention strategies. Luckily, two nutrients have been shown to be effective in reducing myelomas by promoting cancer cell death. These two nutrients are curcumin and vitamin K2. Curcumin is a well-known anti-inflammatory chemical that is naturally occurring in foods such as turmeric. Curcumin has an interaction with the MCL-1 gene and protein. This protein encoded by the gene plays a role in limiting cellular apoptosis or “programmed cell death” which normally occurs when mutation or damage has occurred within a cell. The upregulation of MCL-1 activity is involved in cancer progression and life-maintenance. Curcumin has the ability to downregulate this protein and therefore, support cancer cell death. Curcumin is, however, not very bioavailable when taken orally. The water-soluble chemical can easily be degraded by stomach acid and absorption can be a problem. As a result, it’s advised to take curcumin in the liposomal micelle form which is over 200x more absorptive.

Vitamin K2 is a fat-soluble quinone-based chemical with many import biological functions including supporting normal tissue calcium distribution, cellular metabolism and normal clotting. Like curcumin, vitamin K2 increases cancer cell apoptosis. It does so by changing the expression of various signaling proteins within the cell. Ultimately, the cell becomes less likely to divide and more likely to spontaneously die if mutated. Vitamin K2 is found in green leafy vegetables, onions, cabbage, broccoli, prunes and other natural foods. It can also be taken with supplement.

Both vitamin K2 and curcumin can be complementary additions to traditional medical intervention for MM or as a part of prevention strategies. With this being said, please consult with your doctor before taking new supplements to ensure they are safe for you.

Your ticket for the: Genomic Computational Mapping and Nutritional Supplementation in Multiple Myeloma