The National Foundation for Cancer Research’s (NFCR) annual marquee event was held in Washington, DC on Saturday evening, May 5th. The 2018 Szent-Györgyi Prize for Progress in Cancer Research ceremony and dinner occasioned much, including a gathering of NFCR principals and scientists, communication of the Foundation’s mandate, messages from the organization’s donor community and, first and foremost, honoring of two scientists who have made “significant contributions to cancer prevention, diagnosis and treatment.”

To an audience of over 180, the Prize was delivered to Douglas Lowy, M.D., and John Schiller, Ph.D., for their work—spanning three-plus decades together at the U.S. National Cancer Institute (NCI)—in the development of the human papillomavirus (HPV) vaccine, effective against cervical and a half-dozen other cancers.

A better case study of basic oncology research’s potential downstream impact could hardly be drawn up. As was poignantly relayed in the award acceptance remarks by Dr. Schiller, the idea for an HPV vaccine that would be effective against cervical cancer was arrived at together by the two scientists at a time corresponding to his daughter’s birth. While the first derived product would be available just as she turned 13, the age at which the vaccine is advised to be administered. Smiles beamed across the faces of every person gathered and applause followed as father asked daughter to please rise and be acknowledged. A lovely moment. 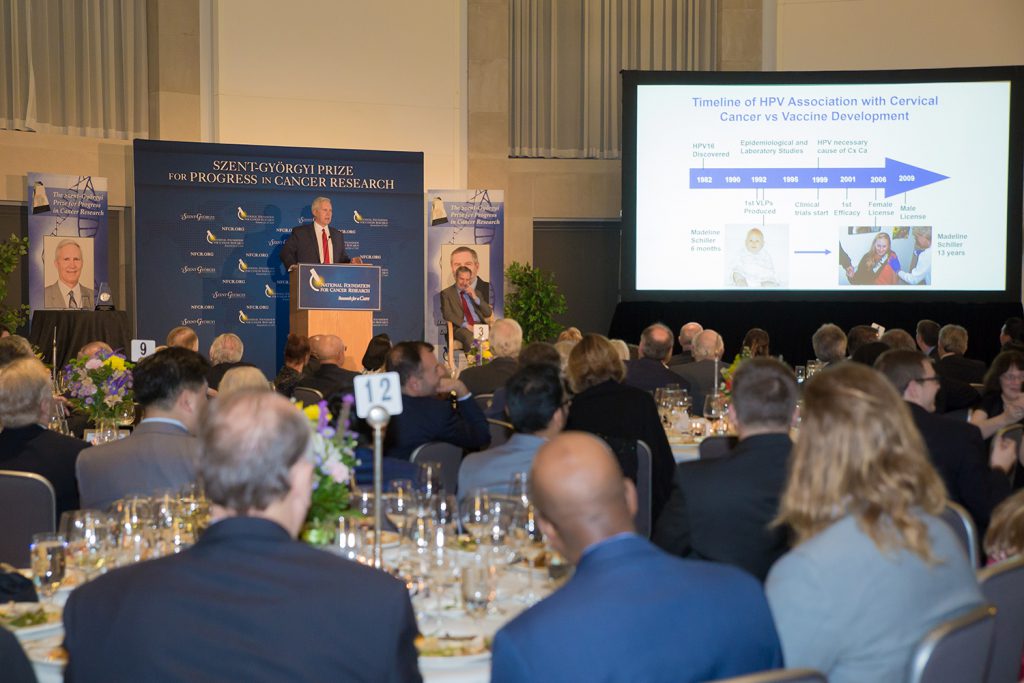 This was preceded by modest and humble recognition from the other of the two men of the evening. Dr. Lowy stressed that the vaccine was made possible only by the latitude offered by NCI in supporting what was then such experimental research, the clinical trials bravely undergone by patients and the early commitment shown by pharmaceutical companies Merck and (now) GlaxoSmithKline. 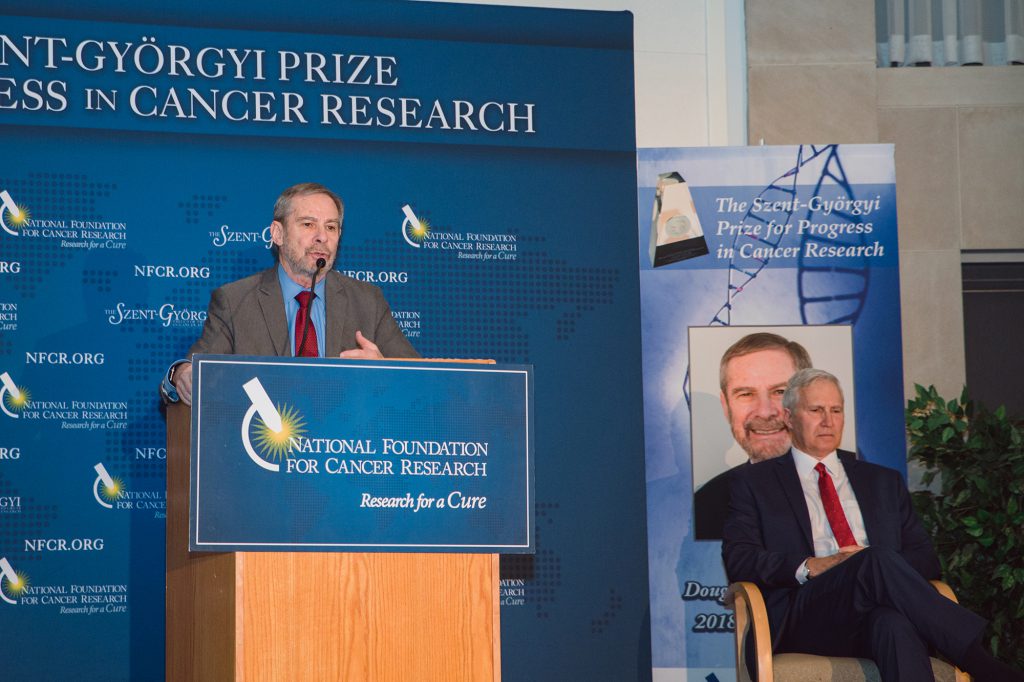 As to the firms, they took a chance on paying for the licensing rights when most other pharmaceutical companies were skeptical of the anti-viral technology’s potential. This commitment was made in the mid-1990s, over a decade before the vaccine would win its first Food and Drug Administration approval. That product was Merck’s Gardasil. GlaxoSmithKline’s Cervarix would follow, as would a bolstered version of the former—Gardasil 9.

Together, as highlighted by 2018 Prize Selection Committee Chair—and 2017 winner—Michael Hall, Ph.D., in his introduction of the two winners, these three global HPV vaccine brands have prevented upwards of 400,000 cancer deaths globally over the past dozen years. In perspective, cervical cancer alone is the second most frequent cause of cancer-related fatalities among women, accounting for nearly 300,000 deaths around the world annually. 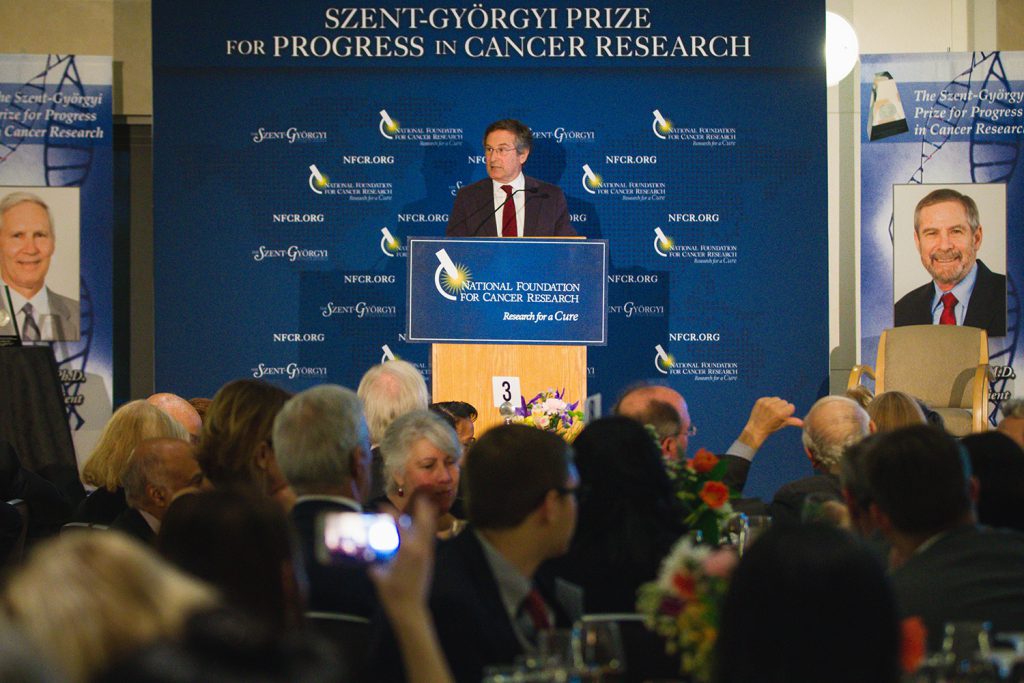 A theme of much having been done, but even more remaining ahead was very much prevalent throughout the night. This was perhaps best summarized in Dr. Lowy’s matter-of-fact observations that the vaccine’s potential remains unrealized. But that he and his longtime partner continue to be deeply engaged in efforts to improve upon the technology, including recent studies related to lowering effective dosages from up to three shots over multiple months to as few as one shot, one time.

Setting the stage for Doctors Hall, Lowy and Schiller’s remarks was NFCR CEO Franklin Salisbury, Jr., who espoused the vision of the Foundation’s co-founder, Nobel Laureate Dr. Albert Szent-Györgyi, that basic research’s impact, although rarely evident upon its performance, was critical to the breakthroughs that would later relieve people from cancer.

Bookending all of this were messages by and on behalf of special NFCR donors—Reverend Paul Sisk, honoring Susan Irene Parker, and Youth Ambassador Michael Yan, honoring a grandfather and teammate. Their stories resonated with all present and encapsulated what NFCR is all about.

Concluding the affair was NFCR President—and 2018 Prize Selection Committee Co-Chair—Sujuan Ba, Ph.D., with her words that results in research efforts against cancer, “are possible when brilliant, nimble and curious minds are provided with both the resources and free-range to understand and confront this most formidable, challenging and terrible of a disease. It is these principles which 45 years ago spurred the creation of NFCR, and which have guided our efforts ever since.” 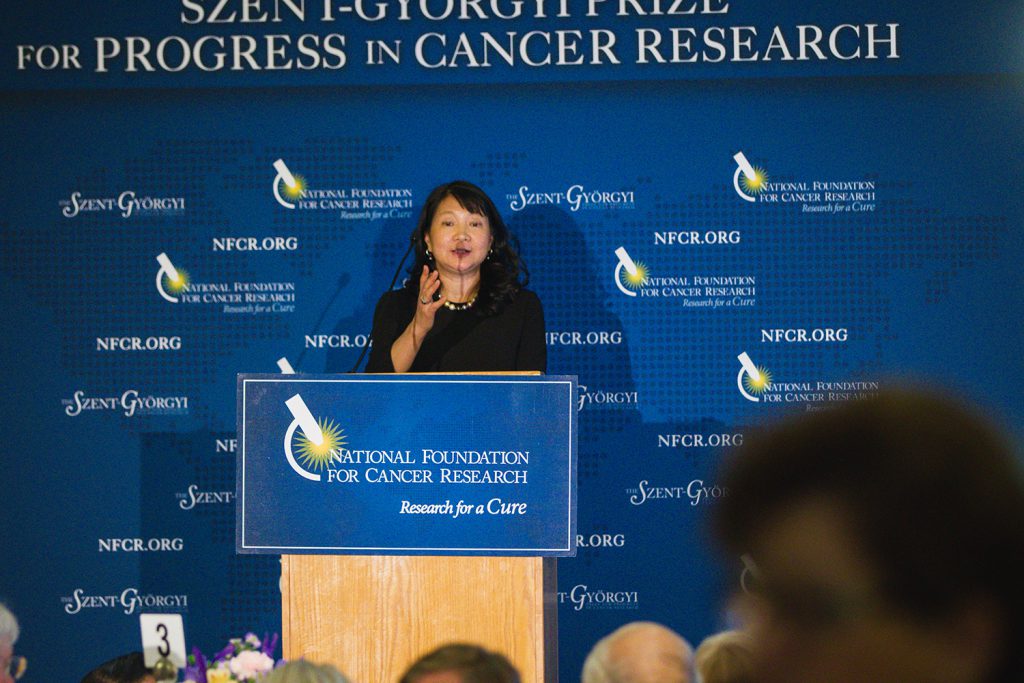 The evening was a grand celebration of the Foundation’s model in which early stage oncology discoveries are as equally laudatory as the latter stage breakthroughs which serve as the more obvious milestones in cancer technology products being brought to market. The 2018 Szent-Györgyi Prize winners commended NFCR’s unique role over the years in acting upon this belief. What better praise than from two cancer research luminaries who were responsible from shepherding so transformative a cancer prevention plaform from idea to product.

Click here to view all photos from the event >>

Your ticket for the: An Evening Honoring Tremendous Achievement in Cancer Prevention