Teaming Up to Give Back: Two Generations of Penn Chemists Collaborate to Fight Cancer 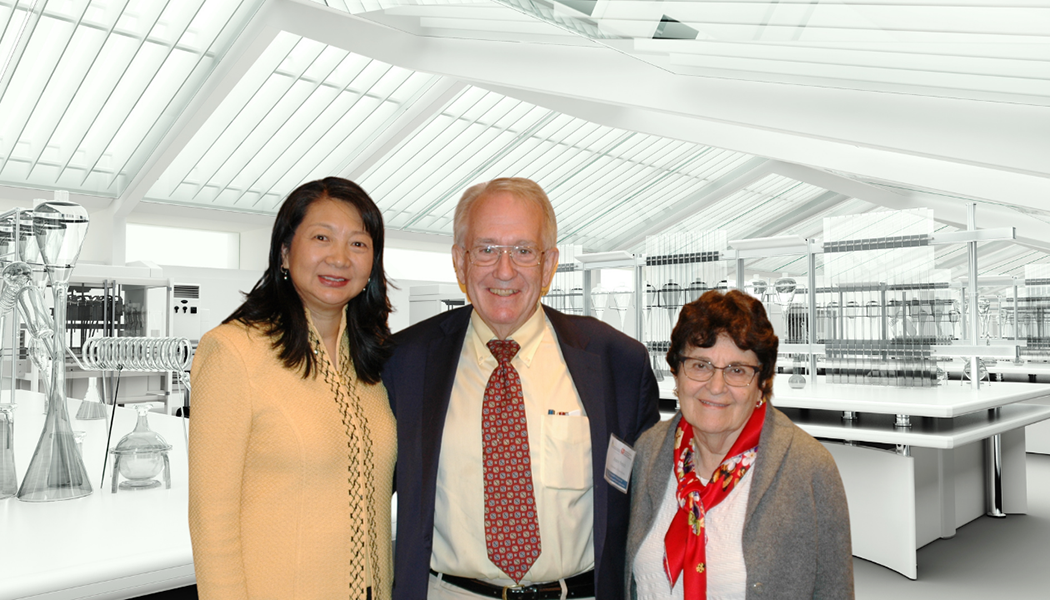 In an 1856 letter to American botanist Asa Gray, Charles Darwin wrote, “In the long history of humankind (and animal kind, too) those who learned to collaborate and improvise most effectively have prevailed.”  Collaboration has clearly been central to the life and work of Sujuan Ba, Ph.D., President and CEO of The National Foundation for Cancer Research (NFCR), an innovative nonprofit organization that provides funding to scientists dedicated to cancer research.

Dr. Ba, who received her Ph.D. in Inorganic Chemistry from the University of Pennsylvania, has sought to help her American alma mater to network with other research institutes in US and across the globe to forge new collaborative partnerships. “We are fortunate to be living in an age in which technology breaks down barriers among scientific innovators around the world,” she said. “There is no telling where such collaboration can lead.”

Collaboration has been a bedrock principle of NFCR, which was founded in 1973.  Two years earlier, Franklin C. Salisbury, Sr., an attorney and entrepreneur, was reading an article in the Washington Evening Star about the research funding hardships of Albert Szent-Györgyi, who received the 1937 Nobel Prize in Physiology or Medicine for his work on vitamin C.  Szent- Györgyi’s research, conducted at his laboratory in Woods Hole, theorized that cancer was ultimately an electronic problem at the molecular level.  In time, this theory led to the bioelectronics theory of cancer and the concept of free radicals.  And yet, at that point, in 1971, he had reached an impasse.

Conventional research funding agencies viewed Szent-Györgyi’s research as too uncertain and declined to fund his grant proposal.  Moved by the scientist’s plight, Salisbury sent him a $25 contribution—and thus began an auspicious collaboration.  Salisbury’s modest donation turned out to be the seed from which an enormously significant and far-reaching adventure grew.  Salisbury later visited Szent-Györgyi in Woods Hole, where the two envisioned a non-profit charity that would raise funds to support innovative cancer research.

Since then, with the grassroots support of millions of Americans, the NFCR has provided over $390 million of “adventure funding” to pioneering scientists, providing vital seed funding that enables research to proceed in high-risk, high reward disciplines that typically are not well funded by government agencies.

Dr. Sujuan Ba, who joined NFCR in 1999 and served as its Chief Science Officer and now the Chief Executive Officer, has built innovative scientific platforms for global collaboration that have served to break down barriers slowing cancer research. This, in turn has accelerated the development of the next generation of cancer treatments.

Recently, Dr. Ba has facilitated and nurtured several key collaborative programs with the well-known medicinal chemist, Amos B. Smith III, the Rhodes-Thompson Professor of Chemistry at the University of Pennsylvania, who is well-known for synthetic innovations in chemistry for therapeutic applications. 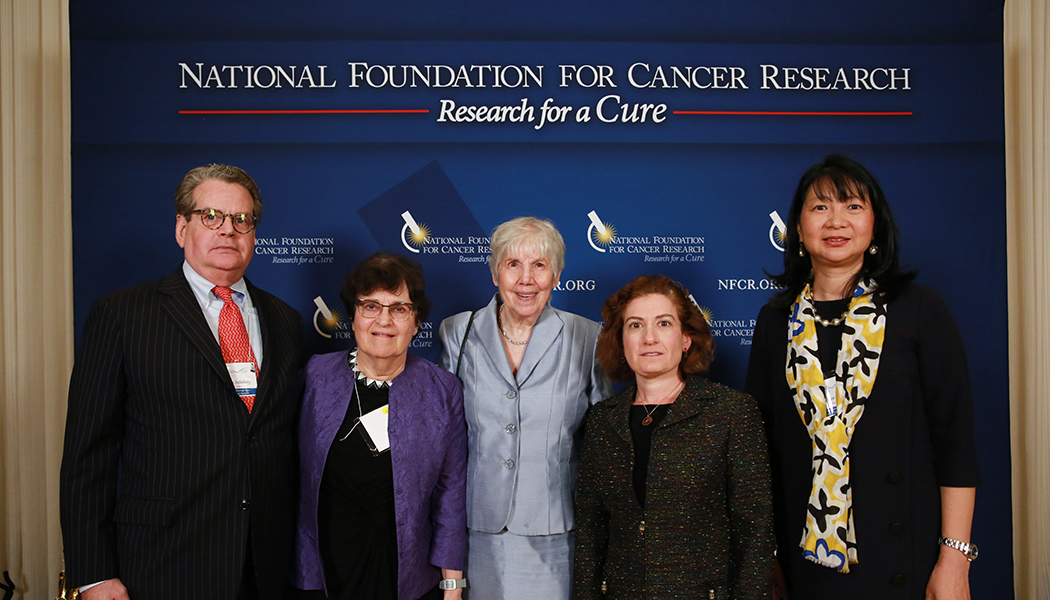 In 2016, Stefanie Smith, a trustee, and a good friend of Marilyn Hill and long-term donor of NFCR died from cancer. She left the NFCR a legacy bequest, instructing the NFCR that Hill’s wish was to fund team research that would improve the outlook for patients with triple negative breast cancer (TNBC), one of the deadliest types of breast cancer.  The standard treatment for patients with TNBC, as well as other types of breast cancer and certain lung, ovarian, and pancreatic cancers, involves the use of the natural product drug, Taxol®.

Professor Susan Horwitz of Albert Einstein College of Medicine is one of NFCR’s longstanding Fellows, who together with her graduate student, Peter Schiff,  discovered Taxol’s mechanism of action. Her vital research contributions and advocacy encouraged the National Cancer Institute to develop the drug. Part of Professor Horwitz’ research program was invested in the discovery of other natural products that could be used to treat Taxol-resistant cancers, which led to a fruitful collaboration with Professor Smith at Penn, who had synthesized a gram of discodermolide, a Taxol-like molecule that was being investigated for activity in cancers resistant to Taxol.

Dr. Ba brought together Stephanie Smith and Dr. Horwitz, and pleasingly the peer review panel allocated funds from Ms. Hill’s trust to support a collaborative project led by Horwitz, Smith and Dr. Hayley McDaid, a colleague of Professor Susan Horwitz also based at Albert Einstein college.  One of the synthetic analogues of discodermolide has shown itself to be superior in cellular assays performed in Taxol-resistant cell models.  This fruitful collaboration, now continuing under the leadership of Dr. Hayley McDaid, demonstrated an impressive pharmacologic profile for this novel discodermolide analogue. Interestingly, novel discodermolide-modified molecules have enhanced ability to induce cancer cell death in Taxol-resistant models and a reduced propensity to induce a state known as senescence, an outcome that may cause toxicities.  Minimizing the risk of induction via senescence is a significant, although overlooked property in contemporary anti-cancer drug development.

It should also be noted that Professor Smith was the department chair during Dr. Ba’s graduate training for her doctorate.  “I was thrilled to reconnect with Dr. Smith, one of the professors I remember fondly as a graduate student at Penn,” said Dr. Ba. “I am so happy that I can   continue to contribute to the body of research conducted in the laboratories at the Department of Chemistry at Penn. This way, I can fulfill the donor’s desire and give back to my alma mater, to which I am indebted for my education and career.”

In the fall of 2019, at the Marriott Hotel in Bethesda, Maryland, the NFCR and its partner organization, the Asian Fund for Cancer Research (AFCR), a charity in Hong Kong that Dr. Ba founded in 2005 to focus research on cancers prevalent in Asia and stimulate global collaborations, hosted their biannual Scientific Symposium of the State of Cancer Research and Global Collaboration. This allowed NFCR and AFCR-supported scientists to gather together to present and share their latest research findings.

In attendance was Professor Jiancheng Hu of the National Cancer Center Singapore, a young AFCR-supported molecular and cell biologist.  Hu had discovered the resistance mechanism of standard inhibitors to a hyperactivated cell growth pathway present in 40% of cancers, and had begun to develop candidate next-generation inhibitors.   However, he needed an expert chemist to optimize the lead compounds.  That is where a fortuitous match came to the rescue.  Dr. Smith raised questions with Dr. Hu during the session and afterwards.  They mutually decided to collaborate in order to synthesize and investigate the optimal lead drug molecules for this innovative mechanism of action.  Dr. Smith immediately began to share initial ideas about modeling and synthesizing analogues that could improve the efficacy of Hu’s candidate inhibitors.

It did not take long for Dr. Ba and members of the Scientific Advisory Boards of NFCR and AFCR to recognize the potential impact that might derive from a Hu-Smith intercontinental   collaboration that could benefit patients globally.

Dr. Ba and her team worked with the Office of Research Services at the University of Pennsylvania and the Office of Research Administration of the National Cancer Center Singapore to forge a formal scientific collaboration agreement. This, in turn, provided the critically needed funding to advance this collaborative project. The goal is to create a new drug candidate, to be optimized by Professor’s Smith’s laboratory at Penn, with biochemical and clinical trials conducted by Prof. Hu’s team in Singapore.

“I am very excited about this collaboration to develop an efficacious inhibitor as a new treatment for many patients in great need,” said Dr. Smith. “Collaboration is the true path toward success, and it is my honor and pleasure to work with Professor Hu.  Through the generosity of AFCR and vision of Dr. Sujuan Ba, our joint research is now possible.  It is especially gratifying to see Dr. Ba, our Penn graduate student, playing such an active role in making important collaborations happen.“

Dr. Ba expresses equal excitement about this initiative. “Cancer has no border, so we will work with the best teams anywhere in the world to advance the most innovative research projects that can potentially save patients’ lives worldwide,” she said.  “It has been a very rewarding experience to work with Professor Smith and the wonderful team at Penn’s Office of Research Services to forge this collaborative partnership between the University of Pennsylvania and National Cancer Center Singapore.”

Dr. Ba envisions many more such collaborative ventures in the years ahead. In 2019, she worked with Franklin Salisbury, Jr., NFCR’s CEO Emeritus, and retired banker and long-term NFCR volunteer advisor Charlie Weatherspoon to co-found the AIM-HI Accelerator Fund, a non-profit venture philanthropy organization.  AIM-HI’s vision is to build a collaborative platform that will fund, nurture, and accelerate the world’s most promising oncology entrepreneurs and startups. “AIM-HI is about impact investing, and our greatest success will be when breakthroughs being made in the lab are commercialized and made readily available to patients,” says Dr. Ba. “The AIM-HI Accelerator will open a door to the future—a future where no one will have to be afraid of cancer.”

Your ticket for the: Teaming Up to Give Back: Two Generations of Penn Chemists Collaborate to Fight Cancer

Teaming Up to Give Back: Two Generations of Penn Chemists Collaborate to Fight Cancer