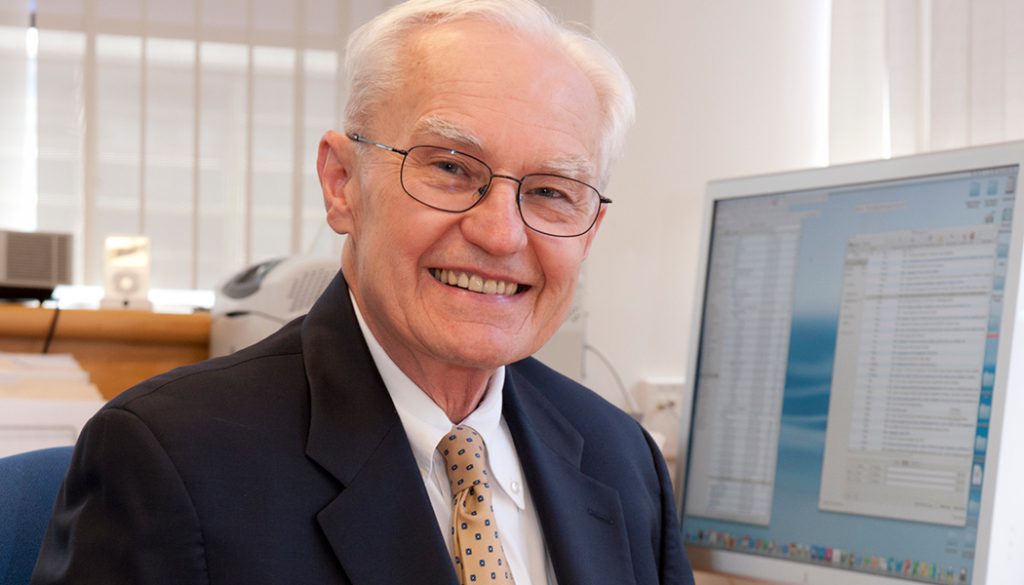 “Tumors are wounds that don’t heal,” says Harold Dvorak, M.D., and if that sounds like an overly simplification, it is a foregone conclusion that some of the most complicated problems have very simple beginnings.

A scientists funded by the National Foundation for Cancer Research (NFCR) from 1980 to 2016, Dr. Dvorak joined the Harvard Medical School faculty in 1967 and is a past president of the American Society for Investigative Pathology. He is in a position to simplify cancer to its basics.

It was he and his colleagues who in 1983 discovered that tumors secreted a regulator of blood vessel formation called vascular permeability factor (VPF), and that using an antibody to block it could prevent the edema (swelling) characteristic of human cancers. In 1986, Dvorak found that VPF was partly responsible for the growth of abnormal blood vessels found in tumors, namely, that it stimulated endothelial cells (cells that line the interior surface of blood vessels and lymphatic vessels) and angiogenesis (the development of new blood vessels)—reactions usually found in the wound-healing response. Dvorak demonstrated that by secreting VPF, known today as vascular endothelial growth factor (VEGF), tumors essentially turn on, mimicking the wound-healing process in order to maintain a blood supply, as well as creating a means to spread.

Down to the Essence

“Normal blood vessels are divided into a sequence of arteries, arterial and venous capillaries, and veins. This is the normal pattern of vessels,” Dvorak explains. “Tumors have a very different set of vessels they develop, and they are quite abnormal. The feeding arteries are simply very enlarged arteries, the draining veins are greatly enlarged veins, but the intermediate vessels, especially one called the mother vessel, is the vessel that leaks and is permeable to macromolecules. Stuff gets out of them.”

“Stuff” like VPF/VEGF. But when Dvorak talks about “leaky vessels,” he does not mean an artery that is bleeding out. Rather, a leaky blood vessel affected by VEGF sprouts more vessels via angiogenesis.

To grow beyond minimal size, solid tumors need to induce the formation of new blood vessels to supply them with nutrients and to clear waste products. None of this is unique to cancer, but the processes of angiogenesis is, in fact, a very basic mechanism of the body. (For example, it was the poorly accounted for interference of angiogenesis by thalidomide in the 1950s that had tragic consequences, the formation of new blood vessels being vital to the normal limb development of a fetus.) But cancer is notorious for taking normal bodily processes and mutating them into a malignancy.

Nevertheless, “tumors don’t do anything original,” states Dvorak. “They make use of various components of what already exists. And so they use this molecule, VEGF, to grow their new vessels.”

It was a landmark discovery in the mechanics of cancer, and Dvorak won NFCR’s first Szent-Györgyi Prize for Progress in Cancer Research in 2006 for his work.

“Obviously it is a great honor,” Dvorak says, with more than a little humility, “and I was very pleased to get it. I didn’t enter research to get awards, although it was very nice and I appreciated it.”

Dvorak’s work was instrumental in the later development of Genentech’s Avastin, the first VEGF-targeting anti-angiogenic drug approved by the U.S. Food and Drug Administration. It has since become one of medicine’s most versatile therapies. In conjunction with chemotherapies, Avastin is approved for the treatment of non-small cell lung cancer, renal cell carcinoma, the aggressive brain cancer glioblastoma multiforme (also known as GBM) and certain types of cervical and ovarian cancers. More than 280 clinical trials are currently investigating the use of Avastin in over 50 tumor types.

In all, the practice is the same: By preventing its associated angiogenesis, a tumor essentially starves to death. The strategy is so successful that Avastin can be also be applied to non-cancerous VEGF conditions. The drug has been shown effective in slowing the effects of age-related macular degeneration, choroidal neovascular membrane and other diseases of the eye where a proliferation of blood vessels is the cause.

Now 80, Dvorak is retired, but his lab remains open and he is a sought-after lecturer for up-and-coming medical professionals. He is quick to point out that medicine is a slow, sometimes ponderous process, and that revolutionary discoveries aren’t necessarily the rule.

But, if Dvorak’s own experience is any example, it pays off in the end.

Your ticket for the: Harold Dvorak: The Trailblazer