Web Cavenee: In the Genes - NFCR

Web Cavenee: In the Genes 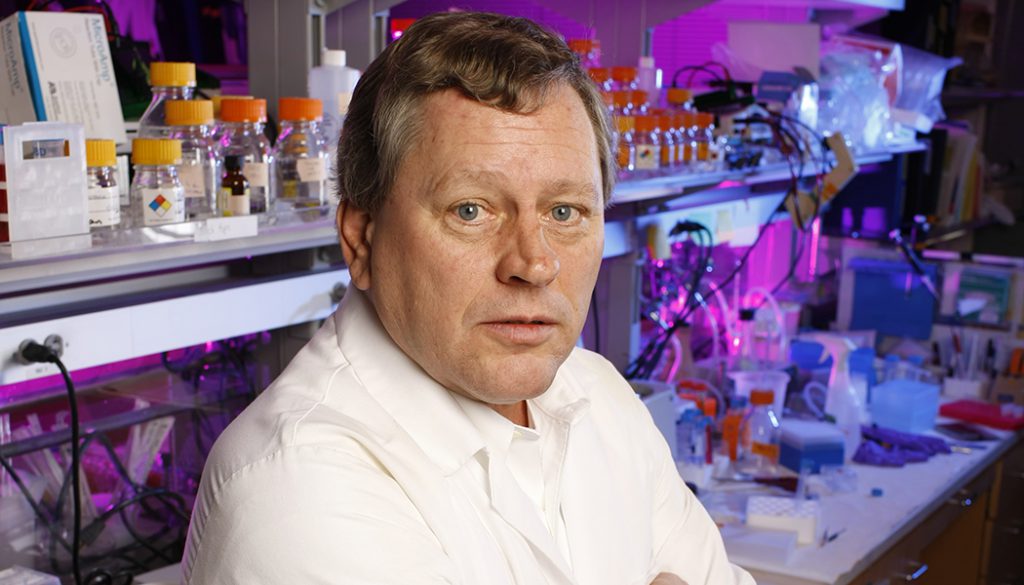 In 2016, archeologists working in the Swartkrans Cave in South Africa found a piece of foot bone belonging to a hominid dating back 1.6 to 1.8 million years. This alone would create a buzz among scientists. But it was what was on the bone that generated headlines: This ancient human had osteosarcoma, or bone cancer. It is the earliest example of cancer yet found.

It may be commonsensical to think that if a malady has been in the human genome that long, and probably even longer, evolution would have produced some sort of protection from it. As it turns out, evolution did just that. But it wasn’t until 1982 that a scientists found these defenses—buried deep in our human genes!

Thirty-six years ago, when working on retinoblastoma, a hereditary pediatric eye cancer, Webster “Web” Cavenee, Ph.D., noticed patients had discrete tumors in their eyes, despite having inherited the propensity to develop the disease from their affected parent.

“That is the pattern a geneticist like me would call recessive at the cellular level,” he explains. “It suggested to us that the tumor formation required two events, one of which was in all cells in the eye and the other which occurred stochastically (randomly), creating rare cells that were doubly hit.”

Using that initial observation as a starting point, Cavenee and his team surmised that the events would be in the homologous loci on the two chromosomes that came from the mother and father and that they would cause a loss of function. Some cytogenetic studies suggested that there might be such a locus on chromosome 13. Cavenee focused on that and developed and applied various molecular biological techniques to be able to definitively show that his idea was formally correct.

“Put simply, these genes dampen the activity of genes that drive cellular growth,” summarizes Cavenee. “When they are missing or defective, growth control is unconstrained and cancer results. They have been likened to the brakes in a car that regulate the accelerator.”

His research validated the “two-hit hypothesis”—proposed in 1953 and refined in 1971 by, respectively, Carl Nordling and Alfred Knudson—and he became the first person to demonstrate proof of tumor suppressor genes in humans. The discovery changed, and continues to change, the conceptual framework of cancer initiation and progression.

“It was the first demonstration of the mechanism of cancer predisposition in humans,” he says. “Since then, most human solid tumors have been shown to employ this mechanism.”

Indeed, far from being unique to retinoblastoma, half of all tumors, including those of muscle, melanocytes, kidney, prostate and breast, today are known to stem from mutations found in tumor suppressor genes. Thanks to Cavenee, now the scientific advisory board chairman of the National Foundation for Cancer Research’s (NFCR) and one of our funded scientists from 2002 to 2015, new gene therapies aiming to reverse those mutations or their effects represent a world of promise to cancer patients. For his work, he was awarded the prestigious Szent-Györgyi Prize for Progress in Cancer Research in 2007.

At his acceptance speech, Cavenee recalled a moment early in his career when he witnessed a child blinded, having both eyes removed due to cancer in each. “He woke up from anesthesia and said, ‘Mommy, I can’t see!’ And he never would,” he remembers. “And at that point, it was personal.”

Today, Dr. Cavenee works on the underlying basis on brain tumors, developing therapies to attack them and new ways of performing clinical research to directly test those ideas and approaches. He is the director of global strategic alliances in central nervous system cancers with the Ludwig Institute for Cancer Research and a professor of medicine in the cancer biology program at the University of California San Diego.

And it is still personal. Cavenee admits that his inspiration comes from the patients themselves.

“The patients who suffer from these diseases, their bravery and their dignity—every day I try to do something for them,” says Cavenee.

Your ticket for the: Web Cavenee: In the Genes

Web Cavenee: In the Genes