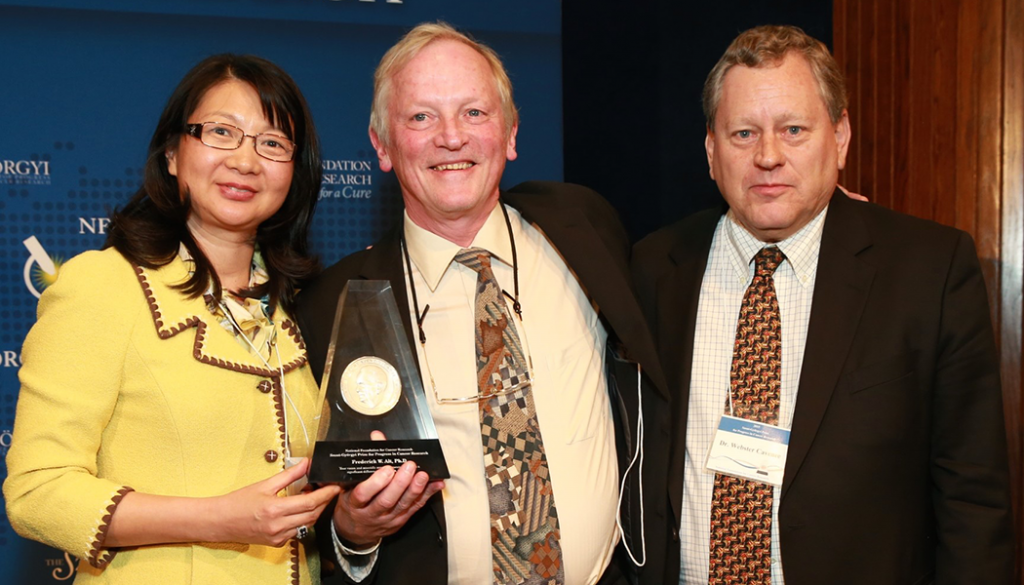 Ask 100 physicians why they got into medicine and you’ll get 100 different answers: Some take the noble route and want to help people, others are just hardwired for it and still others learned early on that potential mates tend to worship doctors (or at least their mothers do!). And then, there are those for whom the drive to cure hits a nerve.

“My parents both died from cancer when I was very young,” says Frederick Alt, Ph.D., explaining how he lost his mother at age eight, his father at 11. “I wanted to make a contribution; I wanted to do this for a long time.”

And so he did. Today, as Professor of Genetics at Harvard Medical School, Director of the Program in Cellular and Molecular Medicine at Boston Children’s Hospital and a Howard Hughes Medical Institute Investigator, Alt gives every impression that the battle against cancer is very much joined. In fact, when one says Alt led the charge responsible for some of the most fundamental paradigm shifts in oncology, it is more than just spin.

There was a time when it was thought the human genome was fixed and unalterable. But Alt’s discovery of gene amplification in chemotherapy-resistant cancer cells, where a cancer cell essentially changes its genes in order to survive, radically changed the way we see the disease, and explained how cancers can become more malignant, more prolific and more resistant to treatment.

“Thirty, forty years ago, we would be treating patients with a drug that was extremely successful,” Alt, now 68, recalls. “The tumor would shrink, it would go away, the patients were getting better. And then, all of a sudden, a new populations of cells would come along and grow out, but no longer be susceptible to the drug.”

It should not come as a surprise that in 2015 Alt won, by a unanimous vote, the National Foundation for Cancer Research’s (NFCR) prestigious Szent-Györgyi Prize for Progress in Cancer Research, one of the greatest honors in oncological research.

“For me, it’s totally humbling,” said Alt in an interview with NFCR at the time. “To get something like the Szent-Györgyi, which specifically recognizes contributions in cancer research, and research that has made a difference — it’s hard to describe how satisfying that is.”

Not letting any of his accolades run away with him, Alt is quick to note his work is the culmination of several other studies, and that it was the clinicians that took his work and applied it in the field.

“Once they had the idea of genes amplified, they could look at which tumors had them, which tumors didn’t. That would help them stage the tumor and figure out the next treatment. It made a big difference for the patients.”

Alt continues his work in immunology and cancer biology, with his work published in respected journals including Cell and Nature. At his lab at Boston Children’s Hospital (voted this year as the country’s best children’s hospital by U.S. News & World Report), Alt investigates the mechanisms that generate immune system antigen receptor diversity and those that generate and suppress genomic instability in mammalian cells. His work on a DNA repair mechanism called “non-homologous end joining” highlights a process protecting against translocations, a type of genetic damage that leads to cancers including lymphoma and leukemia.

As an integral part of a teaching hospital, Alt also mentors several up and coming researchers in the field and is preparing them to run their own laboratories, holding meetings every week where his lab members present their data. By his own reckoning, has Alt trained more than 100 postdoctoral fellows and graduate students, estimating more than half of his former postdocs are now tenured faculty members. In the medical world, that’s a stellar record.

“I’ve been very fortunate over the last 30 or 40 years to be in the right places and the right times to do something in cancer,” Alt says, maintaining a modest mien. And he emphasizes that for all the progress made by an individual scientist, curing cancer is a group effort.

“There are so many wonderful leaders—people making major breakthroughs and then putting it out there, so it excites the public.”

Your ticket for the: Frederick Alt: It’s Personal