The National Fastpitch Coaches Association’s StrikeOut Cancer is an initiative where softball teams rally together to support the cancer community. Similar to NFCR’s Play4TheCure program, StrikeOut Cancer gives teams the opportunity to not only unite their team, but also their community.

This year, StrikeOut Cancer meant a little more to Shell. Shell lost her grandmother to cancer the previous Summer, lighting a fire in her to increase her efforts.

As a former softball player herself, she also remembered hosting several StrikeOut Cancer games. Based on those experiences, she didn’t envision the amount of success they would reach.

Leading up to the game, the team sold different colored cancer ribbons in their student center. This gave students and teachers an opportunity to honor those in their own life who have fought cancer. All the while helping to promote their game to a larger audience.

As the team stepped on the field, they wore custom jerseys featuring names that weren’t their own. Instead, they wore the names of people in their lives who have faced cancer. Many of the girls’ jerseys had more than one name on their backs. “Because of the design, they were limited to three names but a lot of girls asked about more,” Shell shared. Shell designed the black and pink custom jerseys with the seniors on the team.

Lastly, at the game, one of the player’s grandmother threw out the first pitch.

Suffice to say, the tone for the day was set well before the first inning.

In order to amplify their contribution to cancer research, Shell and Head Coach Cassie Cunningham organized a whole lineup of activities. About six weeks prior to their StrikeOut Cancer game, each of the girls sent out 10 handwritten letters to friends, family, or past coaches. This not only got each girls’ community invested in what they were doing to support cancer research, but it also accounted for more than 50% of their fundraising.

With help from a few partners, the team was able to hold a 50/50 raffle and a prize raffle. Prizes included a 55” TV as well as a griddle grill. The parent who won the 50/50 raffle selflessly donated her winnings back to their cause.

Throughout the process, to keep their community engaged and giving, the team posted fundraising updates on social media. 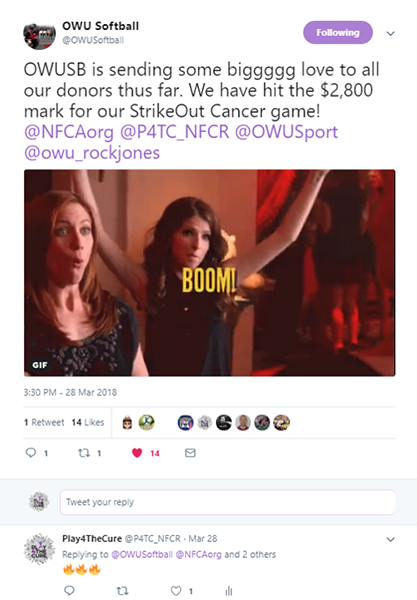 NO ONE FIGHTS ALONE

In addition to their other initiatives, OWU partnered with their campus dining service, Chartwells, on a few aspects of the game. Chartwells sponsored the cost of their specialty jerseys and bought enough for their staff to wear around campus. The week leading up to the game, the Chartwells’ staff members wore their jerseys in the dining hall. This led to great grassroots promotion for game day. They graciously donated cancer ribbon cookies, popcorn, water and pop to be sold at the event.

Similar to the help provided by Chartwells, the Walmart distribution center in Grove City, OH donated the prize items for the raffle. Overall, these contributions highly impacted not only the fundraising but also the excitement of the day itself.

This story is presented as a part of the Play4TheCure program’s coaches spotlight series. The series aims to acknowledge the coaches that make our program great and the tools they use to engage their communities. To share your story, contact us at Play4TheCure@nfcr.org.

If you’re interested in getting your team involved with the Play4TheCure program, visit our registration page.

Your ticket for the: StrikeOut Cancer Success with Ohio Wesleyan Softball