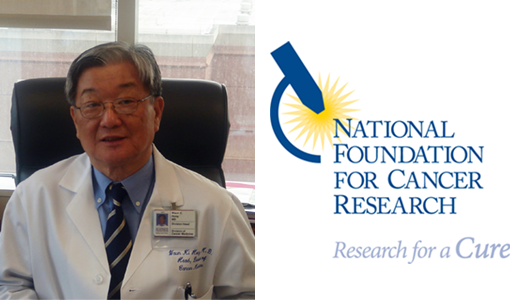 The National Foundation for Cancer Research remembers and recognizes the contributions of Waun Ki Hong, M.D., F.A.C.P., D.M.Sc. (Hon.), who passed away on January 2, 2019, at the age of 76.

Born in 1942 in what is now South Korea, amidst World War II and before the 1945 political division of the Korean peninsula, Waun Ki Hong obtained his medical degree from the Yonsei University School of Medicine. After fulfilling a stint as a flight surgeon in the military of his fledgling country, the Republic of Korea, he moved to the U.S. in 1970 and completed his medical residency at the Boston Veterans Affairs Medical Center (BVAMC), followed by a fellowship at Memorial Sloan-Kettering Cancer Center. He would later return to serve as chief of medical oncology at BVAMC and was a faculty member at both the Boston University and Tufts University Schools of Medicine before in 1984 joining the University of Texas’s MD Anderson Cancer Center. There, his leadership roles stretching over three decades included that of vice provost, head of the Division of Cancer Medicine and Samsung Distinguished Chair in Cancer Medicine. Among his many positions outside of MD Anderson, Dr. Hong served as president of the American Association for Cancer Research, board of directors member of the American Society for Clinical Oncology and scientific advisory board member of the Asian Fund for Cancer Research. He authored more than 685 scientific publications and served on the editorial boards of at least 17 scientific journals.

Dr. Hong was supported by our organization from 1998 to 2013, and his NFCR-funded contributions were many. They included the investigation of such drugs as celecoxib and curcumin for their potential in lung cancer prevention. Through these and similar efforts, he established proof of principle that “chemoprevention” works in patients with head and neck cancer, thereby helping define a new discipline in cancer prevention. Dr. Hong also was the main architect and principal investigator of the groundbreaking Biomarker-Based Approaches of Targeted Therapy for Lung Cancer Elimination clinical trial. BATTLE, the first successful biopsy-driven trial in lung cancer, opened up a new paradigm of personalized cancer therapy for solid tumors. With NFCR support, he too initiated multiple other clinical trials to test personalized medicine in cancer patients, including the Vanguard Trial of Investigational Therapeutics in Adjuvant Treatment of Lung Cancer (VITAL).

Less than a year after having been named a Giant of Cancer Care, NFCR is particularly saddened by the death, too soon, of a brilliant cancer physician and scientist.

Your ticket for the: In Remembrance of Dr. Waun Ki Hong