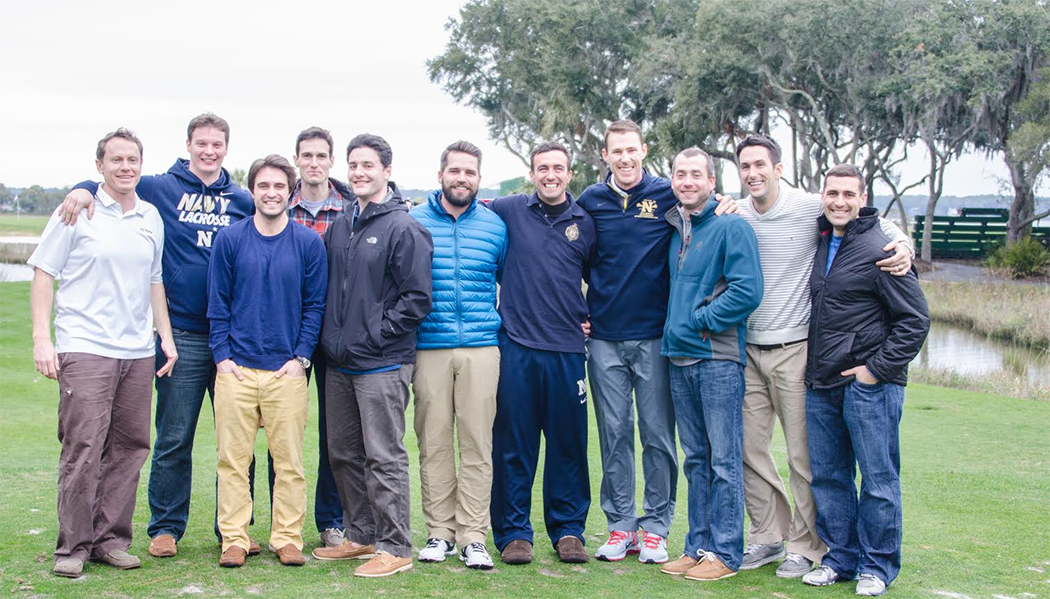 Dwayne Osgood is no stranger to looking a challenge in the eye and tackling it head on. After graduating from the Naval Academy and meeting his wife, Elizabeth, Dwayne served two tours in Iraq as a Company XO and Company Commander with the US Marine Corps. Since then, Dwayne and Elizabeth have continued to navigate the various challenges of parenthood as they raise three young children. However, earlier this year, Dwayne and Elizabeth were faced with a new, difficult, and frightening challenge.

“I felt very sick in late February and could not seem to shake the very painful headaches,” Dwayne shared. “After a trip to the emergency room in the middle of March, a CT scan revealed a brain mass.”

The mass was identified as a glioblastoma (GBM) tumor, which is the most common type of brain cancer. Although GBM accounts for 45% of all malignant brain tumors, researchers have struggled in identifying a cause and finding a cure. The main problem researchers face in finding a cure for GBM is the length of time required by the standard clinical trial model. This model can require up to eight years of research and hundreds of millions of dollars per treatment tested, which isn’t feasible for a fast-acting disease like GBM.

“Three days after the scan, I was in surgery to have a resection,” Dwayne recalled. “I completed my initial radiation and chemo therapy on June 7 and have moved into a sustainment chemo phase for six months. I have upcoming MRIs to check the status and organize treatment options going forward.”

As Dwayne and Elizabeth navigate and adjust to these new challenges, their optimism hasn’t faded. They’ve continued living their life with the same enthusiasm as before the diagnosis. In fact, as Elizabeth prepared for her annual participation in the Marine Corps Marathon (MCM), Dwayne had a sudden urge to join his wife in the 26.2-mile run in October. Almost as quickly as Dwayne committed to run his fifth MCM, he decided to turn the marathon into an opportunity to raise money for a charitable cause. He soon identified the National Foundation for Cancer Research’s Play4TheCure program, which encourages athletes to leverage their passion for sports to raise funds for cancer research.

“When I sent the fundraising link to my friends from the lacrosse team in the Naval Academy, they all began to sign up for the run,” Dwayne explained. “I think there are 17 signed up to run to date. Only one of these friends have completed a marathon before, but they’re all great athletes.”

Dwayne named this unexpected team ‘Team Invictus’, after the famous poem by William Ernest Henley. The funds raised by Team Invictus will be allocated to GBM AGILE, a new collaborative initiative created to produce adaptive clinical trials for GBM patients. This initiative is designed to offer greater responsiveness, flexibility, speed, rationality and incentives than the standard clinical trial model due to its global scope.

“GBM AGILE allows us to get more researchers involved and allows there to be enough patients enrolled in trials to get statistically significant results,” Dwayne stated. “This sharing of data and information could allow the research to move faster, and ultimately bring lifesaving and life extending treatments to patients faster.”

With overwhelming support from teammates, family, friends, and community members, Team Invictus has currently raised over $23,000 for GBM AGILE. Dwayne and Elizabeth have proudly turned this unexpected challenge into a remarkable opportunity to make a significant impact in cancer research. As the GBM AGILE initiative continues to grow, patients are able to find new hope where little previously existed.

“Brain cancer is my condition, not my position,” Dwayne concluded. “I am not going to let a condition define who I am or alter my position. I am going to keep a positive attitude, continue to love my life and those in it, and have faith that there is a plan for me.”

For anyone interested in contributing to GBM AGILE with Team Invictus, please visit the team’s website or nfcr.org/gbm-agile.

Update: Dwayne Patrick Osgood passed away on December 19, 2020 after a 21-month battle with glioblastoma. The National Foundation for Cancer Research is grateful for his lasting contributions to GBM AGILE. We will continue our efforts to defeat cancer through research, in his memory and in the memory of all those who have lost their lives to cancer.

Out of the night that covers me,
Black as the pit from pole to pole,
I thank whatever gods may be
For my unconquerable soul.

In the fell clutch of circumstance
I have not winced nor cried aloud.
Under the bludgeonings of chance
My head is bloody, but unbowed.

Beyond this place of wrath and tears
Looms but the Horror of the shade,
And yet the menace of the years
Finds and shall find me unafraid.

It matters not how strait the gate,
How charged with punishments the scroll,
I am the master of my fate,
I am the captain of my soul.

Your ticket for the: Play4TheCure: Team Invictus