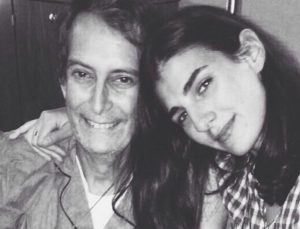 Shaina Danziger was thriving as a successful high-end fashion model in Europe. She appeared in magazines such as Vogue and Glamour. Her world changed forever when her father, Andy, called her from his home in New York in October 2011. “Sit down,” he told her, and proceeded to explain that he had been diagnosed with prostate cancer but the doctors had caught it early and it was highly treatable. Andy wasn’t worried, so neither was Shaina.

After a couple months of struggling to come to terms with his diagnosis, Shaina decided to relocate to Los Angeles where she could still pursue her modeling career but be closer to home, or at least on the same continent. Andy had started radiation and everything was moving in the right direction.

During the summer of 2012, Andy’s doctors found that his prostate-specific antigen levels were high and they would move forward with more testing. Results revealed that he had been misdiagnosed and that his cancer had already metastasized to his lymph nodes. Shaina immediately moved back to New York to support her dad as he took next steps with this new diagnosis.

What followed was three years of doctor’s visits, drug trials and various medications that all worked for a few months at a time then stopped. By early 2015, Andy was experiencing pain, and though he tried to brush it off, Shaina was sure that he knew the cancer had spread to his bones even before they even told him.

“To hug him, you knew he was ill. He had lost a significant amount of weight and was noticeably frail. That summer was the turning point in his battle with cancer,” said Shaina. “He went from a seemingly healthy individual to a very sick and fragile shell of himself. I spent the majority of time in the months that followed taking care of him at his house on Long Island and taking the train with him to and from the city.”

Andy was being admitted to intensive care at Memorial Sloan Kettering Cancer Center on a near weekly basis. The Sloan visits became more and more frequent, and he was eventually hospitalized indefinitely before they recommended he be transferred to Calvary’s hospice facility in the Bronx.

“I argued with the doctors. Why would they send him to hospice? That’s where people go to die and dad wasn’t dying,” Shaina said.

By his final week, Andy was unable to eat on his own. The family was called and stood by his side as he passed on. Shaina held his hand and sobbed into his arm as he took his final breath.

“My dad was with me when I came into this world, and I was with him when he left it. I will always want him here, but I am happy to say that I have no regrets,” Shaina said. “I spent days and nights at the hospital with him. We laughed, we talked, we enjoyed each other’s company. Most of all, I am happy that my father knew how incredibly loved he was.”

Cancer can feel incredibly isolating, said Shaina. It affects more people than you realize. She was shocked to find that most people she spoke to after Andy passed away had also been affected in some way by cancer. It’s been three years since Andy’s death and Shaina can still feel the pain of his loss as all-consuming. But it has taught her that there is no time limit on grief.

“When I was really struggling, a social worker at Sloan told me to take everything a day at a time, and if that was still too hard, to try an hour or a minute at a time,” said Shaina. “It was some of the best advice I’ve ever been given and I still try to apply it in my day-to-day life.”

References:
• The National Foundation for Cancer Research, co-creator of Faces & Voices of Cancer, thanks Ms. Danziger for her Winter 2019 testimonial

Your ticket for the: Faces & Voices of Cancer—In Depth: Andy Danziger