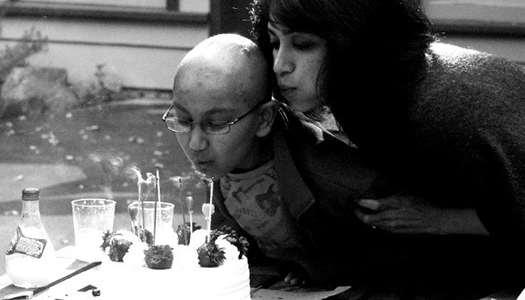 In 2005, Purvi Shah’s son, Amaey, was diagnosed with leukemia at just three years old. From that point on, life was no longer as Purvi and her family knew it. During the first year of treatment Amaey was in and out of the hospital—more in than out. Many hours were spent shuttling from one facility to the next, sitting in waiting rooms and outpatient clinics.

“I felt that something was missing, especially with the loss of control. The only thing I knew to calm me down was to do art,” said Purvi. “I thought I would extend that to my son, who was going through treatment, and his brother.”

Purvi brought art projects to distract them during time spent in waiting rooms. There were many days where Amaey was unable to go outside in order to avoid the flu or spreading viruses, and he was even kept home from preschool for a year.  Purvi began to fill Amaey’s time with art projects that stirred happiness and laughter in their household. They would forget about the difficult things going on in their lives, Purvi said.

“You spend so much time in the hospital that the families in the hospital become more like your family than the world outside,” Purvi said. “I got to know all the kids and the parents in the waiting rooms. I don’t know how this happened, but they got involved in doing art with me.”

After six years of battling cancer, Amaey, only nine years old, tragically passed away in September 2011. Purvi carries on her son’s legacy through the Kids & Art Foundation, where she leads the organization in bringing hope, healing, peace and lasting memories to those experiencing pediatric cancers.

Purvi has a background in graphic design and her husband worked for Pixar. Using their network of artists, Purvi thought it would be beneficial to connect these creatives with pediatric cancer patients. In 2008, in the midst of her son’s battle with cancer, she held her first workshop at Pixar, linking together 15 artists with 15 kids.

Purvi felt that the workshop was an amazing experience. Word spread like wildfire, and she began to receive e-mails from additional artists and parents—wondering when she would do more and how they could participate. That’s when the Kids & Art Foundation was born.

Kids & Art has grown to greater heights and celebrated its 10th anniversary last year. The organization now hosts monthly workshops at Pixar. Additionally, she started a program at Stanford Children’s Hospital, that expanded to the University of California San Francisco Benioff Children’s Hospital, where artists go in to the waiting room every week for two hours and work with kids while they’re waiting to undergo treatment.

“We try to make sure we don’t create any boundaries for our kids because there are children that are diagnosed at two years old,” Purvi said. “We do have some really young ones. They have programs specialized to specific age groups—for example, young adult programs at Stanford that are geared toward young college students or people in early adulthood.”

Kids & Art has hosted a series of different mediums for their events including glassblowing, pottery, metalworking, leatherworking, jewelry making and painting on silk.

“The simplest thing art does is it lets the child be a child,” Purvi said. “It really gives them the moment to pause and be.”

Purvi said the art gave her a sense of control. As Amaey’s caregiver and main advocate, she was in a cycle of making decisions and living with constant uncertainty. At the end of the day, or during the moments in-between, she would sit down with her art and become refreshed by the mundane task of choosing a color to make art with.

“I was in control of the little piece that I was designing,” Purvi said. “And when I looked at it, it made me smile—that is important and it’s what we miss when we have so much stress.”

Parents who have newly diagnosed children and grapple with that ‘what next’ feeling often reach out to Purvi for advice. Talking about her son is hard, but the first thing she tells them is to search for the ‘art’ in their life.

The Kids & Art Foundation is located in Burlingame, California. To learn more about it visit KidsandArt.org.

The National Foundation for Cancer Research, co-creator of Faces & Voices of Cancer, thanks Ms. Shah for her Fall 2018 testimonial

Your ticket for the: Faces & Voices of Cancer—In Depth: Amaey Shah