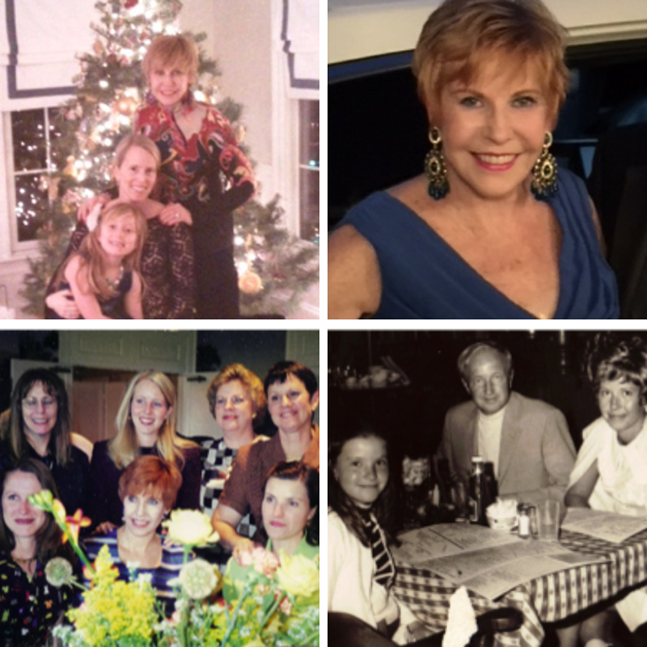 “My story began in a tin-roofed farmhouse near the banks of the Tippecanoe River. My feisty, funny and brilliant maternal grandmother still ran one of the family farms, where they had returned during World War II. She was diagnosed with breast cancer my senior year in college, and my mother and baby sister went to Indiana to care for her. The uncles promised they would get her to radiation treatments, but apparently that didn’t happen. She died about three years later, but not before my beautiful mother was stricken.

“She had a mastectomy, left the hospital, got dressed, put on her hat… and went to the Kentucky Derby!

“That became her life for the next 21 years—metastasis to the second breast at the time of my wedding, and then to the lungs and bones. She dealt with it, using the down time to acquire massive amounts of information on many subjects from the books piled on her king-size bed. Up times, she was there for the births of my two children, and flew in when she could to babysit. She helped me found the Daffodils and Diamonds breast cancer charity luncheon in 1981, and attended three of the first yearly events. Towards the end, she and my father took part in clinical trials at the University of Colorado Hospital, the two of them bonding as never before as they fought the disease… and explored the breathtaking Rockies.

“Mother lost her battle in 1986, at age 66, way too soon for such a vibrant and unique soul. I dutifully began mammograms at 40; but I also took hormone replacement therapy medications at 50, and continued low doses even after warnings were issued. Bad idea!

“Another poor choice was my nightly cigarettes and crosswords. In December 2007, I participated in a National Foundation for Cancer Research (NFCR) video on breast cancer and went for my yearly mammogram. I was called back for additional evaluation, but delayed, since it was Christmas time and my father was visiting. I scheduled an appointment for mid-January, and delayed again, as I was hosting a bridesmaids’ luncheon. Another bad idea!

“My early February 2008 follow-up showed ‘worrisome’ results, which I had predicted sitting in that waiting room with the other callbacks. I had not dodged the ‘Big C Bullet.’ A needle biopsy was scheduled, and I called my GYN, who asked me to come in immediately. He could not feel the tumor; but it showed up on the mammogram. He sent me straight downstairs to the surgeon he recommended, who repeated the screening and scheduled me for a biopsy. Having also been referred to a reconstructive plastic surgeon, I had my team in one day!

“On February 15, the biopsy, which was really a lumpectomy, was performed. The surgeon got it all, with clear margins. Test results indicated a small, Grade 3, Stage I-II invasive ductal carcinoma. My husband and I discussed options with him, but there was never any question: bilateral mastectomy with immediate reconstruction. I asked for the earliest possible date, as I had to be at the Daffodils and Diamonds luncheon on March 13!

“My surgery was on February 25, and a long week later, at my follow-up visit, my surgeon went on-line to find the test results from the removed nodes. He came back down the hall, grinned and gave us a thumbs-up!

“No node involvement, no radiation, no chemo, but I was a candidate for aromatase inhibitors. I said, ‘NOW, I will cry!’ (My husband waited till we got to the car.)

“With the wonders of a laptop to coordinate with the Daffodils and Diamonds Committee, a good mastectomy bra, hidden drains, the moral support of family and lots of pain meds, I was on that runway on March 13, telling my story. The wives of both my surgeons were beaming in the audience.

“I did have genomic testing, which indicated low risk of recurrence, especially since I was fortunate to have positive hormone receptors for adjuvant therapy. I was found to be positive for the BRCA-1 mutation, and in 2009, I underwent a prophylactic oophorectomy, so as to greatly reduce the risk of future ovarian cancer.

“A number of my mother’s only brother’s five children and grandchildren too were found to carry the similar mutation. One first cousin died at 46, nine months after a diagnosis of Stage IV inflammatory breast cancer. Her BRCA-positive daughter had a prophylactic bilateral mastectomy at 33. While another of the four sisters has had a lumpectomy with radiation. Her cancer has recurred, and she recently had a bilateral mastectomy.

“Sadly, my little sister, whose childhood was scarred by mother’s cancer battle, was diagnosed in February 2009 with the dreaded triple negative breast cancer. She had surgery, radiation and chemotherapy, but it metastasized to her brain. She died nine months later, at age 48, leaving a teenage son.

“I am so grateful that my daughter does not have the gene mutation, so she and my granddaughter are safer. Of course, my son knows he must also be tested. Thanks a LOT, Grandmother!

“My oncologist at Lombardi Cancer Center of Georgetown University Hospital was interested in genetics, and I am hoping somehow our family history will help in early detection, targeted gene therapies and the search for a cure—a search aided by our upcoming 38th Annual Daffodils and Diamonds Luncheon, Fashion Show and Silent Auction on March 14, 2019 at the Columbia Country Club in Chevy Chase, Maryland, proceeds of which are donated to NFCR.”

If you would like to engage Alice-Anne directly, she has provided the following contact information to answer questions, offer encouragement or just have a friendly conversation:

Your ticket for the: Faces & Voices of Cancer—In Depth: Alice-Anne Birch