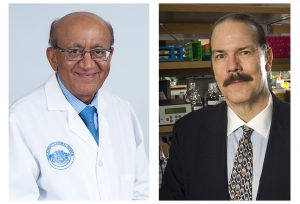 BETHESDA, MD – In an event this afternoon at the historic Mayflower Hotel in Washington, DC, two funded scientists of the National Foundation for Cancer Research (NFCR) were inducted into the National Academy of Inventors (NAI). Paul B. Fisher, M.Ph, Ph.D., and Rakesh K. Jain, Ph.D., both NFCR fellows, were among the group of academic inventors to have received the professional honor. Originally elected as NAI fellows in December, today’s induction ceremony included a keynote address by Commissioner of Patents Andrew H. Hirshfeld of the U.S. Patent and Trademark Office (USPTO).

Doctors Fisher and Jain join a select group of fewer than a thousand peers. Election and induction as an NAI fellow are widely considered as among the highest professional accolades bestowed to academic inventors who, according to the Academy, “have demonstrated a prolific spirit of innovation in creating or facilitating outstanding inventions that have made a tangible impact on quality of life, economic development and welfare of society.”

Persons elected as an NAI fellow are named inventors of U.S. patents and are nominated by their peers. The current class was evaluated by an 18-member selection committee comprised of NAI fellows, National Inventors Hall of Fame inductees, members of the National Academies of Science, Medicine or Engineering and officials of such agencies and organizations as the USPTO, National Institute of Standards and Technology and Association of University Technology Managers.

“The oncology research bona fides of both Dr. Fisher and Dr. Jain are extraordinary,” said NFCR President Sujuan Ba, Ph.D. “Our organization has been honored to support the life-changing cancer research conducted by these two fine gentlemen and their labs.”

“Recognition of their work by the National Academy of Inventors is particularly special,” continued Ba. “Validating that NFCR-funded efforts progress into the market, offering hope for cancer patients and survivors.”

Dr. Fisher is chairman of Virginia Commonwealth University’s (VCU’s) Department of Human and Molecular Genetics, founding director of the VCU Institute of Molecular Medicine and holder of the Thelma Newmeyer Corman Chair in Cancer Research at the VCU Massey Cancer Center. He too serves as an emeritus professor at Columbia University’s College of Physicians and Surgeons. Dr. Fisher was selected as Virginia Outstanding Scientist of 2014, a competitive award presented by Governor Terry McAuliffe, and has over 55 patents issued in his name. He was founder and director of GenQuest Incorporated, a functional genomics company, which merged with Corixa Corporation, traded on NASDAQ and was acquired by GlaxoSmithKline. He too co-founded Cancer Targeting Systems, InVaMet Therapeutics and Interleukin Combinatorial Therapeutics, the latter two in partnership with Dr. Webster K. Cavenee, NFCR’s Scientific Advisory Board chairman.

Dr. Jain is Andrew Werk Cook Professor of Tumor Biology at Harvard Medical School and director of the Edwin L. Steele Laboratory for Tumor Biology at Massachusetts General Hospital. Today’s induction into the National Academy of Inventors puts him in exceptionally rare company, as he is already one of only 21 persons also to be elected to the other three National Academies. Dr. Jain was awarded the National Medal of Science by President Barack Obama in 2016 and holds numerous patents in the field of medicine. He is founder of XTuit Pharmaceuticals and has served on multiple biopharmaceutical companies’ scientific advisory boards and in trustee capacities with healthcare industry investment firms.

A third current NFCR fellow, the Scripps Research Institute’s Paul Schimmel, Ph.D., is a prior NAI inductee. An authority in the fields of genetic coding and protein synthesis, his laboratory, among many other efforts, is exploring how operational RNA code-enzymes may suppress tumor progression and metastasis and serve as therapeutic targets. He has founded and/or served as an original board of director member of such biopharmaceutical companies as Abide Pharmaceuticals, Alkermes, Alnylam Pharmaceuticals, aTyr Pharma, Cubist Pharmaceuticals, RepliGen Corporation and Sirtris Pharmaceuticals.

“Our Foundation’s funded scientists demonstrate a propensity for outsized impacts in cancer labs and clinics,” says NFCR CEO Franklin C. Salisbury, Jr. “And too, as evidenced by today’s and prior recognition by the National Academy of Inventors of NFCR fellows, in industry.”

“We congratulate Rakesh and Paul, and are thrilled for their families,” Salisbury added.

The National Foundation for Cancer Research (NFCR) is a 501(c)(3) non-profit organization that provides scientists in the lab the funding they need to make game-changing discoveries in cancer treatments, detection, prevention and, ultimately, a cure. It has distinguished itself in the cancer sector by emphasizing long-term, transformative research often overlooked by other major funding sources. With the help of more than 5.3 million individual donors over the last 45 years, NFCR has delivered more than $350 million in funding to public education and cancer research leading to several important, life-saving discoveries. For more information, visit http://www.nfcr.org.

Your ticket for the: Two National Foundation for Cancer Research Scientists Among the National Academy of Inventors’ Latest Class