Angiogenesis is the formation of new blood vessels.

The process involves the growth of endothelial cells, which line the inside walls of blood vessels.

Angiogenesis is a normal and vital process in growth and development, but it also plays a role in several diseases, including cancers.

A blood supply is necessary for tumors to grow beyond a few millimeters in size and transition from a benign state to a malignant one. In other words, angiogenesis is a cause for concern with tumors because it feeds and sustains them.

Without a proper blood supply, a tumor wouldn’t be able to grow beyond a certain size or spread, so scientists are establishing the most effective ways to block tumor angiogenesis.

Dr. Harold F. Dvorak, who received NFCR funding for over 30 years, discovered that tumor cells secrete a vascular endothelial growth factor (VEGF) and this discovery provided the molecular basis for the field of angiogenesis. Dr. Dvorak’s discovery helped pave the way for research on anti-angiogenesis treatments that can halt and even reverse tumor growth.

In 2004, the first VEGF-targeting anti-angiogenic drug Avastin® was approved by the FDA for the treatment of colorectal cancer, and, today, in addition to colorectal cancer, Avastin is approved for the treatment of non-small cell lung cancer, renal cell carcinoma (a type of kidney cancer), the aggressive brain cancer glioblastoma multiforme (GBM) and certain types of cervical and ovarian cancers.

Dr. Jain is focused on the role of angiogenesis in glioblastoma (GBM), the deadliest form of brain cancer. His research is developing the combined use of anti-angiogenic therapies and immunotherapy (immune checkpoint inhibitors) for GBM patients.

In collaboration, NFCR-funded scientists, Dr. Paul Schimmel and Dr. Xiang-Lei Yang, have determined that the vital protein synthesis enzyme, SerRS, shuts down angiogenesis in breast cancer by inhibiting one of the main genes that controls the expression of VEGF. SerRS is likely a potent suppressor of cancer progression and metastasis. Their research may lead to novel therapeutic applications for breast, brain, rectal, esophageal, kidney, lung and liver cancers. 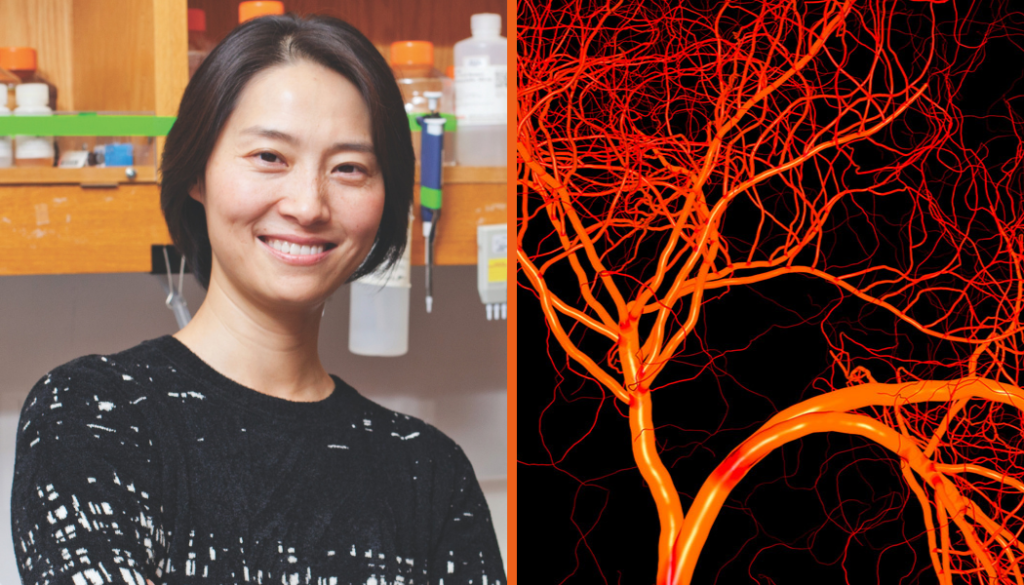 Almost all living things need oxygen to survive. In human cells, the key to staying healthy is the right balance of oxygen. NFCR fellow Xiang-Lei Yang a professor at Scripps Research Institute has spent much of her career exploring the processes by which tumors sprout new blood vessels when they are oxygen-starved, a process known as angiogenesis. Dr. Xiang-Lei Yang, and NFCR-funded scientist Dr. Paul Schimmel, are worldwide experts in aminoacyl-tRNA synthetases (aaRS). aaRS is a family of enzymes that catalyze the synthesis of proteins from tRNA. While aaRS’s are best known for their role in protein synthesis, Dr. Yang discovered that a particular aaRS, SerRS, also plays a role in inhibiting angiogenesis. Prior angiogenesis research suggests that two genes — c-Myc and HIF-1 — are responsible for promoting blood vessel growth in healthy cells and tumors alike. As such, the turning on and transcription of these genes can promote tumor oxygenation and growth. In particular, c-Myc is one of the most important cancer-causing genes upregulated in many types of cancer. It also controls the gene for the production of VEGF, a blood vessel growth factor. In addition to its role in protein synthesis, SerRS limits blood vessel growth by inhibiting the function of the c-Myc and HIF-1. In the study published in PLOS Biology (December 2020), Yang and her fellow researchers share the discovery that during hypoxia, or oxygen starvation, proteins known as ATM/ATR are activated. The ATM/ATR protein activation “silences” or inhibits SerRS and promotes the formation of new blood vessels. Additionally, in separate studies of mice and human breast tissue, the researchers were able to display that ATM/ATR activation had a blocking effect on SerRS and resulted in reduced tumor size. In researching the role of ATM/ATR activation, and SerRS in breast cancer, Dr. Yang’s team found that the expression of SerRS is positively correlated with a greater rate of survival in breast cancer patients. Also, SerRS is significantly downregulated when metastasis, or cancer spread, occurs. Similar findings have been made in several other cancer types including brain, esophageal, kidney (clear cell), rectal, stomach, and thyroid cancers. These findings suggest that SerRS can inhibit the growth and metastasis of certain cancers and that ATM/ATR activation can counter that inhibition. These discoveries, funded in part by the National Foundation for Cancer Research, are core to our understanding of why and how tumors form new blood vessels and metastasize. As such, these discoveries may lead to novel therapeutic approaches that seek to limit ATM/ATR activation.

Your ticket for the: Angiogenesis