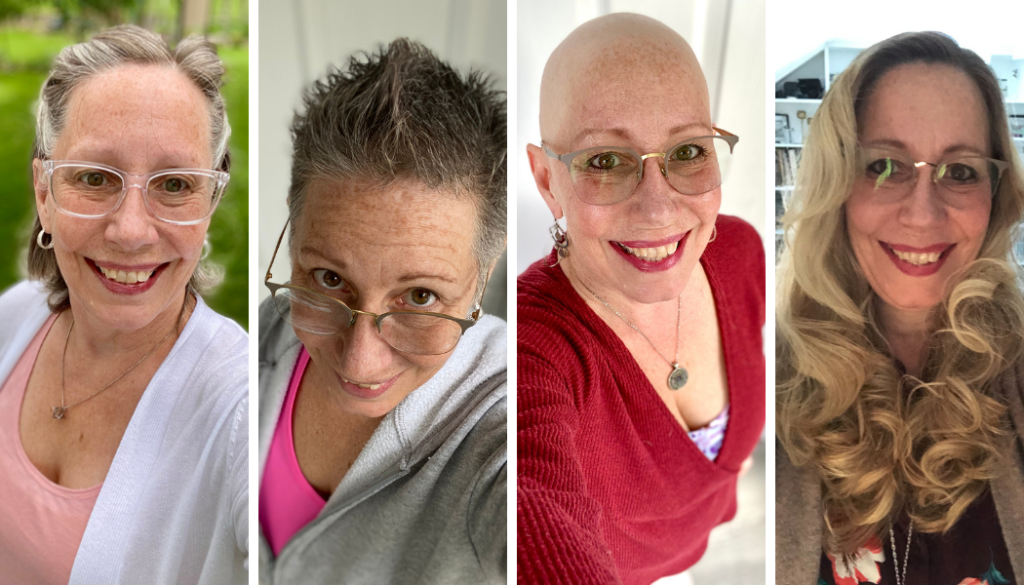 In 2019, Nancy Warner made up her mind: she was going to get into shape. Being an artist, a computer scientist, and a mother, Nancy had proven that she could accomplish what she sets her mind to. Starting with a clear goal, Nancy began to work her way up to a 5k.

“I began to jog outside twice a week, going from 0.25 miles increasing weekly to my goal of three miles,” Nancy explained. “I made it to 2.5 miles and experienced an injury in my left hip and leg. It eventually landed me in the ER.”

Like anyone who ends up in the ER, Nancy’s mind began to wander to all of the frightening possibilities. Was it a stroke? The start of a heart attack? Maybe a blood clot? But not once did Nancy think this was the start of her journey with cancer.

“The doctors were so focused on the fact that my breathing was not normal, yet my heart was fine,” Nancy recalled. “They took an x-ray of my chest, and the doctor sat next to me said he saw shadows on my lungs. He did not know why they were there, so he kept me overnight for observation.”

Over the next two weeks, Nancy’s hip began to heal. So much so that she went on to complete the 5K for which she had been training. Doctors continued to order test after test, putting Nancy through CT/PET scans, bone marrow tests, blood work, lung biopsies, and more. They couldn’t quite figure out what caused those shadows on her lungs. Eventually, they determined it to be a rare form of lymphoma called malt lymphoma.

“I had four treatments of Rituximab (Rituxan),” Nancy began. “The first was an infusion, and the other three were injections. I also started in the ReNew program at the Wilmot Pluta Cancer Center in Rochester, NY. ReNew is a program that helps you with exercise and nutrition, and more. An entire mind, body, spirit approach. They offer exercise classes, yoga, Qi-gong, cooking classes, art therapy, meditation, and more.”

Not long after Nancy’s trip to the ER, she realized she was well past due for a mammogram. Though her mind was busy with many other things, she managed to squeeze a mammogram into her schedule. Almost like déjà vu, Nancy was told that the team found something unusual, and they ordered a biopsy to investigate.

“The next month, I had a lumpectomy, which ended up a partial mastectomy and one lymph node from my arm,” Nancy shared. “Due to my age (58) and the staging of my breast cancer, it was not clear if I would benefit from chemotherapy. I went forward with the Oncotype test – a genomic-based, comprehensive, individualized risk assessment for early-stage invasive breast cancer in adjuvant and neoadjuvant settings.”

Much to her surprise, Nancy’s results came back saying that she would, without a doubt, benefit from chemotherapy. She had four treatments of chemotherapy and blood work every three weeks. Then, after a short break, she had three weeks of targeted radiation five days a week before finally being given Anastrozole, an estrogen hormone blocker, to take daily because the cancer was estrogen positive.

“There was a list of side effects that I experienced,” Nancy reflected. “I kept a calendar journal so that I could share them with the team, and I would know what to expect and what to do with each round of chemo. After my second chemo round, I began to lose my hair. I had very long hair before I started, so I cut it short before starting chemo. My hubby helped me shave my head after the second treatment. I was surprised at how it emotionally affected me. I guess it made it more real, and the emotional numbness began to wear off at that point. I simply and proudly displayed my bald head – unless it was cold. My hair started to come back in shortly after I completed treatments.”

Reflecting on her journey, Nancy advises anyone battling cancer to do their research to help understand the different options available.

“Ask your oncology team questions,” Nancy urges. “Make the decision that is right for you. Everyone is on the same journey with the same map, but there are many paths to choose from – and the choice is yours to make! If you have not already changed your lifestyle, give it a good look. Start now! Exercise, nutrition, and rest made a huge difference in my treatments and recovery.”

Now on the other side of her treatment, Nancy remains dedicated to sharing her journey with others through conversation, yoga, and art.

Learn about her yoga classes and information @nancywarner.yoga

View her artwork at @njalleystudios

Nancy’s story is a part of our Faces & Voices of Cancer initiative that uplifts and amplifies the stories of those impacted by cancer. If you are interested in sharing your story, please visit Faces and Voices of Cancer at www.facesandvoicesofcancer.org. If you would like to honor those facing cancer, please make a gift today.

Yoga for Insomnia, Anxiety, and Socializing in Cancer Patients

Cancer and Diet: Does it Really Matter?

Your ticket for the: The Impact of Living a Well-Balanced Life with Cancer: Nancy’s Story